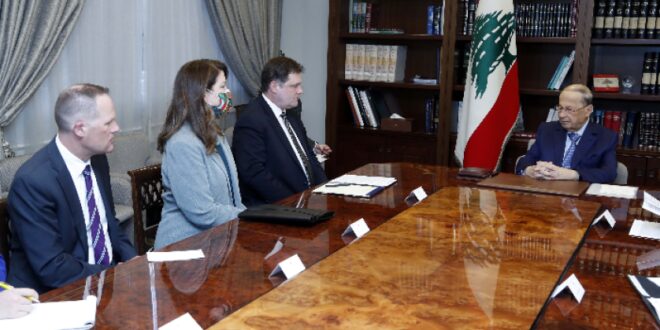 “Lebanese laws are applied firmly and accurately in this field,” Aoun told the delegation during a meeting at the Presidential Palace in Baabda.

He indicated that Lebanon actively participates in international efforts to combat money laundering, and plays its role in the Financial Action Group in the Middle East region.

“Accordingly, Lebanon established the National Coordination Committee for Combating the Financing of Terrorism and the National Anti-Corruption Commission,” the President said.

The Lebanese presidency in a statement said Aoun informed members of the US delegation that the fight against corruption will continue unabated in the remainder of this term.

Later on Tuesday, the US delegation visited Speaker Nabih Berri in Ain al-Tineh but did not make any statement.

Lebanon is struggling to take its steps out of a deep financial crisis that triggered a collapse in the currency and soaring poverty.