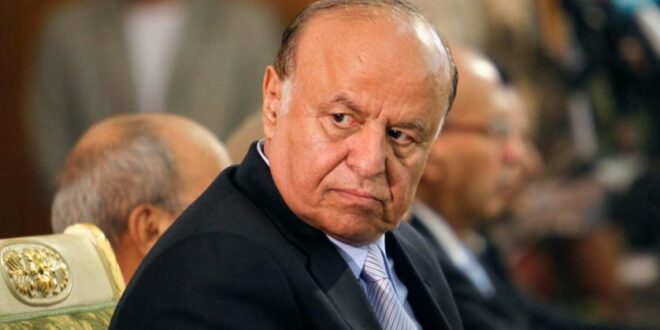 Hadi Meets with UN, US Envoys and Stresses Need to End Houthi Terrorism

Yemeni President Abdrabbuh Mansur Hadi stressed on Tuesday the need to stop the terrorism of Iranian-backed Houthi militias and affirmed his country’s commitment to reaching a sustainable peace solution based on the Gulf initiative, its executive mechanism, outcomes of the national dialogue and relevant UN resolutions, mainly resolution 2216.

Hadi’s remarks came during his reception of the US Envoy for Yemen, Timothy Lenderking, and UN Special Envoy for Yemen Hans Grundberg in the Saudi capital Riyadh.

His meeting with Lenderking and Grundberg followed the UN Security Council passing a resolution that imposed an arms embargo on the Houthis as an entity.

Hadi affirmed to the envoys Yemen’s keenness on peace in line with the three references that are inevitable to achieve a comprehensive, just, and sustainable peace.

The president reiterated his full support for Grundberg and his efforts to reach a comprehensive ceasefire.

The UN envoy to Yemen and Lenderking had returned to the region again in the context of efforts to find a UN plan to bring peace.

For his part, Hadi clarified that the militias are waging their war against the Yemeni people, who are defending their country against hostile acts that affect innocent people and the displaced in cities and camps.

The Yemeni president highly praised the envoys’ efforts to achieve peace the Yemeni people are desperately waiting for.

Hadi pointed out to the miserable humanitarian situation Yemen has been experiencing due to the war and its disastrous consequences. He squarely put the blame on the militias for prolonging the conflict and worsening the Yemeni peoples’ suffering.