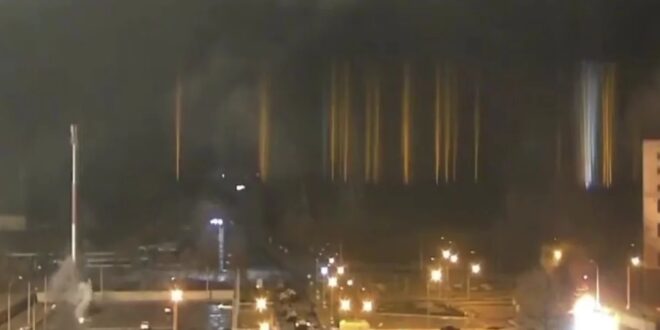 Ukrainian officials said on Friday that fire at the largest nuclear power plant in Europe has been extinguished, but that the facility is now under Russian control after fighting.

In a later development at a Friday news conference, the chief of the U.N.’s atomic watchdog said there had been no release of radioactive material at the plant.

Rafael Mariano Grossi, director-general of the International Atomic Energy Agency, said a Russian projectile had hit a structure at the Zaporizhzhia Nuclear Power Plant in southeast Ukraine that was not part of the reactor, injuring two people. He said his organization has been in contact with Ukraine’s nuclear regulator and managers at the plant after the strike.

“We are fortunate that there was no release of radiation and that the integrity of the reactors themselves was not compromised,” he said.

Earlier Friday, Mayor Dmytro Orlov of Enerhodar, the town closest to the Zaporizhzhya plant, posted a message on his Telegram account saying the flames had been extinguished. Ukraine’s nuclear regulator issued a statement confirming that the fire was out.

The Ukrainian state company that runs the plant posted a message Friday on Telegram saying that the plant is now under Russian control. “Russian forces are controlling the administrative building and passage into the plant,” it says. “Our employees are still inside, ensuring the stable operation of nuclear facilities. Radiation levels are normal,” it said.

The company said there were deaths among the casualties but did not elaborate, saying its website has come under cyberattack.

The complex came under Russian shelling on Thursday – prompting alarm about any possible radioactive damage, and global calls for Russia to halt its attack. In an emotional middle-of-the-night speech, Ukrainian President Volodymyr Zelenskyy said the fire could mean “the end for everyone. The end for Europe. The evacuation of Europe.” He also had a late night phone call with President Joe Biden.

The Zaporizhzhya plant provides a quarter of Ukraine’s electricity. The war has already strained Ukraine’s critical infrastructure, leading to blackouts across the country.

In a rare publicly stated expression of unease about the war in Ukraine, China said it is “seriously concerned about the safety and security” of nuclear facilities in Ukraine following the attack.

Foreign Ministry spokesperson Wang Wenbin told reporters on Friday that China will continue to follow developments at the Zaporizhizhia plant in the city of Enerhodar and “calls on all parties concerned to maintain calm and restraint, prevent further escalation of the situation and ensure the safety of the nuclear facilities concerned,” according to The Associated Press.

In a brief statement on Thursday, the International Atomic Energy Agency said that it had received a report from Ukraine’s atomic regulatory authority stating that Russian armor and infantry had broken through a barricade in a nearby town earlier in the day.

“The battle is going on in the town of Enerhodar and on the road to the ZNPP [Zaporizhzhia Nuclear Power Plant] site,” the regulator told the IAEA, adding that the situation was “critical.”

President Biden spoke with Ukrainian President Volodymyr Zelenskyy about the attack and joined Zelenskyy in urging Russia to cease its military activities in the area and allow firefighters and emergency responders to access the site.

U.S. Energy Secretary Jennifer Granholm said on Twitter that she spoke with her Ukrainian counterpart and that the plant’s reactors were being safely shut down. She also said, “We have seen no elevated radiation readings near the facility.”

The IAEA said the fire had not affected essential equipment and that Ukraine’s nuclear regulator reported no change in radiation levels, according to the AP. The American Nuclear Society concurred, saying that the latest radiation levels remained within natural background levels.

The Zaporizhzhia Nuclear Power Plant is the largest nuclear plant in Europe. It is located in southeastern Ukraine. It consists of six Russian-designed VVER pressurized water reactors that date from the 1980s and 1990s. Ukraine relies on 15 nuclear reactors spread throughout the country for around half of its electricity.

Ukraine was the site of the world’s largest nuclear disaster, the 1986 explosion of a reactor at the Chernobyl plant. Dmytro Kuleba, Ukraine’s foreign minister, warned that if something similar happens at Zaporizhzhia, “it will be 10 times larger.”

Post Views: 120
Previous “Let Them Kill as Many as Possible”- United States Policy Toward Russia and its Neighbors
Next Pentagon establishes communication line with Russians amid war in Ukraine