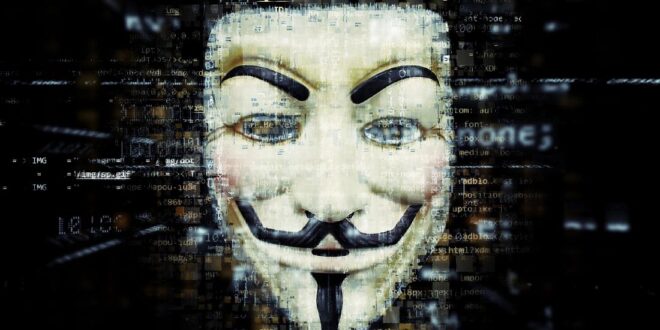 Ukraine war: What part is hackers’ collective Anonymous playing in the war effort against Russia?

They’re mysterious, they’re disruptive, and they’ve picked their side in the war pitting Russia against Ukraine.

The hacker collective Anonymous has claimed credit for several cyberattacks that took down Russian government websites and state-backed news outlets in recent days.

On Monday, several prominent Russian media services appeared to have been hit simultaneously, including the state-run news agencies TASS and RIA Novosti and the newspaper Kommersant.

“Dear citizens. We urge you to stop this madness, don’t send your sons and husbands to certain death. Putin makes us lie and puts us in danger,” the message written in Russian said.

“We have been isolated from the whole world, oil and gas are no longer traded. In a few years, we will be living like in North Korea,” it added.

When Euronews Next attempted to access TASS’s website on Monday morning, a message appeared saying “an error occurred”.

Euronews Next could not independently verify how many websites were affected by the purported attack, nor for how long.

On Thursday, hours after Russia invaded Ukraine, the hacker collective tweeted from an account linked to Anonymous, @YourAnonOne, that it was “officially in cyber war against the Russian government”.

Since then, the group claims it was behind several hacks including distributed denial of service (DDOS) attacks – where a site is paralysed because it’s bombarded with traffic – that brought down Russian government websites and that of RT, the country’s state-backed news service.

On Saturday, the websites of the Kremlin, the Duma – the lower house of the Russian parliament – and the Russian defence ministry were also down in an attack claimed by Anonymous on Twitter.

Anonymous also claimed on Sunday to have hacked Russian state TV channels, posting pro-Ukraine content including patriotic songs and images from the invasion. Euronews Next could not independently verify the claim.

“It’s a fact some cyberattacks are carried out against Russia, but the extent of these attacks is difficult to gauge,” Eric Schmitlin, cybersecurity consultant at Cendium Cyberdefense in Paris, told Euronews Next.

Attribution is also very tricky, he noted, especially in the case of the Anonymous collective, famous for the white Guy Fawkes masks donned by its mysterious members.

“Anonymous the group is actually not a group. It’s everyone and no one since anyone can claim to be part of Anonymous,” Schmitlin said.

Still, the Anonymous, which emerged at the beginning of the 2000s, have historically been vocal about defending free speech and privacy, Schmitlin noted, adding that their actions in cyberspace, while fairly simple, had the potential to be “very disruptive”.

“To defend an institution, a government, you need a lot of resources. But to attack a system you only need one or two skilled persons. Just a dozen people could have a big impact,” he said.

A growing battalion of hackers is believed to be teaming up to fight Russia in cyberspace.

Ukraine’s vice prime minister Mykhailo Fedorov said on Saturday the country was setting up an “IT army” to counter Russia’s digital attacks.

“There will be tasks for everyone,” Fedorov said in a tweet that linked to a channel on the Telegram messaging app featuring a list of prominent Russian websites to target.

Post Views: 110
Previous Hadi Meets with UN, US Envoys and Stresses Need to End Houthi Terrorism
Next Ukraine: Russian space chief suggests ISS could crash into US or Europe as a result of sanctions