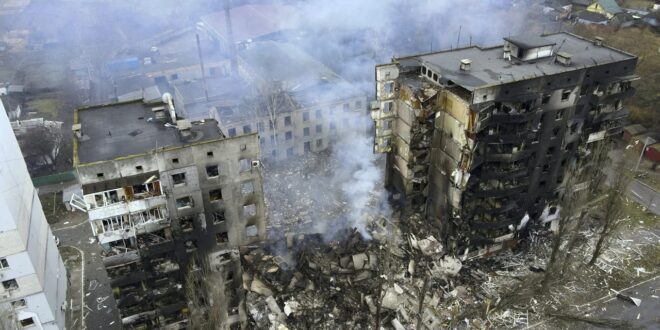 ‘Sadly, We’re Kinda Experts’: Germany on Why Russia Is Not ‘Fighting Nazism’ in Ukraine

Germany slammed the Kremlin’s claim that it is engaged in an anti-Nazi operation in Ukraine over the weekend, accusing Moscow of cynically carrying out war crimes against civilians while engaging in humanitarian rhetoric.

“Sorry, but we can’t stay silent on this one, it’s just far too cynical. What Russia is doing in Ukraine is slaughtering innocent children, women and men for its own gain,” the German Embassy in Pretoria posted on Saturday in response to a tweet by the local Russian delegation claiming that “Russia, like 80 years ago, is fighting Nazism in Ukraine.”

“It’s definitely not ‘fighting Nazism.’ Shame on anyone who’s falling for this. (Sadly, we’re kinda experts on Nazism),” the German Embassy tweeted in a sharp attack on a frequent Russian talking point, which has raised both the ire of the international community and the Ukrainian Jewish community.

Ukrainian Jews expressed outrage on February 24 after Russian troops entered their country on a self-declared mission of “denazification,” claiming that Kyiv was actively carrying out war crimes against its own citizens.

Russian strikes have destroyed civilian infrastructure across the country, including a local Hillel House and Jewish day school in Kharkiv.

Last Tuesday, Russian forces launched an attack on Kyiv’s primary television transmitter, which is located on the edge of the grounds of the Babi Yar massacre site, where tens of thousands of Jews were killed by the Nazis and their local collaborators within a 48-hour period in 1941.

In the aftermath of the strike, Ukrainian President Zelenskyy, who is Jewish, declared: “To the world: What is the point of saying ‘never again’ for 80 years, if the world stays silent when a bomb drops on the same site of Babi Yar? At least five killed. History repeating.”

Up to ten thousand Ukrainian immigrants could arrive in Israel in the near future, and that would only be the first wave of refugees streaming into the country, the head of the Jewish Agency’s regional director for the former Soviet Union told reporters last week.

The current Russian invasion marks the most significant escalation in the ongoing Russo-Ukrainian War since Russian forces annexed the Crimean Peninsula and orchestrated an insurgency in the eastern Donbas region in 2014 that has claimed more than 14,000 lives.

A massive wave of Ukrainian immigration to Israel followed, with 30,000 Ukrainian Jews moving to Israel between 2014 and 2018.

According to UN High Commissioner for Refugees Filippo Grandi, “more than five million refugees from Ukraine have crossed into neighboring countries in 10 days – the fastest growing refugee crisis in Europe since World War II.”

Following the invasion, Germany announced that it would supply Ukraine with defensive anti-tank weapons, surface-to-air missiles and ammunition, a significant departure from its long-standing policy of not exporting weapons to war zones, rooted partly in its bloody 20th-century history and resulting pacifism.

At least 351 civilians have been reportedly killed in Ukraine since Russian troops invaded on February 24, and another 707 wounded, although the true numbers are probably “considerably higher,” a UN monitoring mission said on Saturday.

According to monitors from the Office of the UN High Commissioner for Human Rights, most of the civilian casualties were caused by explosive weapons with a wide impact area, including shelling from heavy artillery and multi-launch rocket systems, and from missile and air strikes.