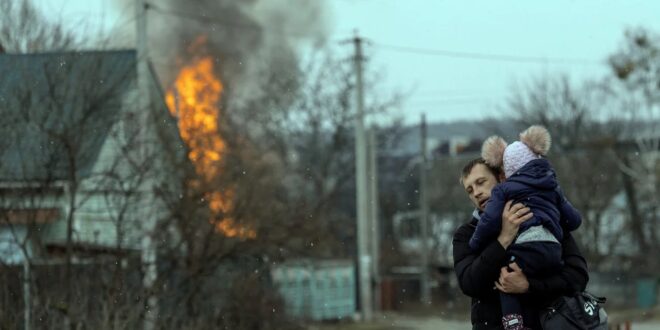 The ceasefire came at the request of French President Emmanuel Macron, who spoke with Russian President Vladimir Putin on Sunday, the military said.

There was initially no confirmation from the Ukrainian side.

Russian President Vladimir Putin warned Saturday that Ukrainian statehood is in jeopardy and likened the West’s sanctions on Russia to “declaring war,” while a promised cease-fire in the besieged port city of Mariupol collapsed amid scenes of terror.

With the Kremlin’s rhetoric growing fiercer and a reprieve from fighting dissolving, Russian troops continued to shell encircled cities and the number of Ukrainians forced from their country grew to 1.4 million.

By nighttime Russian forces had intensified their shelling of Mariupol, while dropping powerful bombs on residential areas of Chernihiv, a city north of Kyiv, Ukrainian officials said.

Bereft mothers mourned slain children, wounded soldiers were fitted with tourniquets and doctors worked by the light of their cellphones as bleakness and desperation pervaded. Crowds of men lined up in the capital to join the Ukrainian military.

Russian forces stepped up shelling of cities in Ukraine’s center, north and south, a Ukrainian official said, as a second attempt to evacuate besieged civilians collapsed.

With the Ukrainian leader urging his people to take to the streets and fight, Russian President Vladimir Putin shifted blame for the war to Ukraine, saying Moscow’s invasion could be halted “only if Kyiv ceases hostilities.”

The United States does not believe a Russian amphibious assault in or near the Ukrainian city of Odessa is imminent, a senior U.S. defense official said on Sunday, amid growing concern about a potential attack on the city.

The official, who spoke on condition of anonymity, estimated Russia had launched about 600 missiles since the start of the invasion and deployed into Ukraine about 95 percent of combat forces it had pre-staged outside of the country.

Russian forces continued to try to advance and isolate Kyiv, Kharkhiv and Chernihiv and are meeting “strong Ukrainian resistance,” the official said.

TikTok to suspend service in Russia

Video-sharing service TikTok will suspend much of its service in Russia for the duration, due to recently passed “fake news” laws which make most mentions of the ongoing war against Ukraine illegal there.

“We have no choice but to suspend livestreaming and new content to our video service while we review the safety implications of this law,” tweeted the company.

Staff at Ukraine’s Zaporizhzhia nuclear power plant continue to operate it, but management is now under the orders of the commander of the Russian forces that seized it last week, the UN nuclear watchdog said on Sunday, citing Ukraine’s regulator.

“I’m extremely concerned,” International Atomic Energy Agency chief Rafael Grossi said in a statement, adding that Russian forces had cut off some mobile networks and the internet, complicating communications with the plant.

“Management and staff must be allowed to carry out their vital duties in stable conditions without undue external interference or pressure.”

U.S. Secretary of State Antony Blinken on Sunday pledged America’s support to the small, Western-leaning former Soviet republic of Moldova that is coping with an influx of refugees from Ukraine and warily watching Russia’s intensifying war with its neighbor.

Blinken met with senior Moldovan officials who are appealing for international assistance in dealing with more than 120,000 refugees from Ukraine that it is now hosting while also seeking security reassurances against potential Russian aggression.

More than 230,000 people have fled into or passed through Moldova from Ukraine since the war began 11 days ago. Blinken said Moldova’s welcoming of refugees is an inspiration to the world.

Russia has troops in Moldova, a country of 2.6 million, stationed in the disputed territory of Transnistria, and they are being closely watched as Russian President Vladimir Putin presses ahead with the invasion of Ukraine.

“In this region now there is no possibility for us to feel safe,” Moldovan President Maia Sandu said.

“Hundreds of Russian troops are being killed every day,” the U.S. ambassador to the UN has told U.S. broadcaster ABC, arguing that Russian President Vladimir Putin is beginning to feel the “consequences of his actions.”

“Putin has made the decision that he wants to continue with confrontation, with escalation, with attacks on civilians and to move forward in this war that Russia is feeling as much as anyone,” said Linda Thomas-Greenfield.

“But I can’t explain why he has continued to move forward in the aggressive way that he’s continuing to do in Ukraine.”

The little boy with platinum blond curls sleeps peacefully on his mother’s lap in the last row of the plane. His mother, by contrast, cries off and on throughout the flight.

“I am so worried about my brother,” Anna Ardasheva whispers, as she wipes away her tears. “He was taken to the front line to fight the Russians, and we haven’t heard from him since.”

Five months pregnant with her second child, Anna, 31, comes from the port city of Odessa, where she owned a successful travel agency. She says she never planned to leave her husband behind, but four days ago, when they were about to cross the border from Ukraine into Moldova, he was turned back because the Ukrainian government is not letting out any men between the ages of 18 and 60 so as not to deplete its fighting forces.

Post Views: 106
Previous War and Punishment in Ukraine
Next ‘Sadly, We’re Kinda Experts’: Germany on Why Russia Is Not ‘Fighting Nazism’ in Ukraine