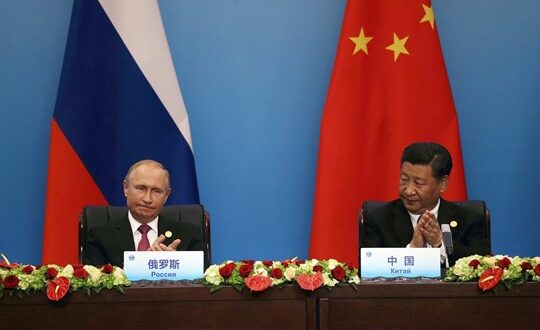 China Must Choose Between Two Bad Options on Putin’s War

In recent weeks, there has been much speculation about the depth of China and Russia’s strategic alignment. Since early February, when the two sides released a joint statement during Russian President Vladimir Putin’s visit to Beijing for the opening ceremony of the Winter Olympics, the argument that Moscow and Beijing are not merely aligned but in an overt alliance against the U.S. and the West more broadly has gained traction.

However, on closer examination, China’s actions in the leadup to and immediate aftermath of the invasion paint a mixed picture as to the extent of the bilateral relationship.

There is no doubt that the China-Russia relationship has deepened in recent years. A $117 billion deal signed during Putin’s Beijing visit for Russia to supply China with oil and gas from the Russian Far East supplements their enhanced energy ties in the aftermath of the Crimea annexation in 2014. They have also increased military cooperation as well as their political alignment against the perceived constraints of U.S. “hegemony.”

Yet, the Russian invasion of Ukraine seems likely to confront Beijing with an uncomfortable choice. As the Carnegie Endowment for International Peace’s Evan Feigenbaum has astutely noted, it presents China with a major challenge in striking a balance between Beijing’s desire for “a strategic partnership with Russia,” its “commitment to long-standing foreign policy principles of ‘territorial integrity’ and ‘noninterference,’” and “a desire to minimize collateral damage from EU and U.S. sanctions.”

Beijing’s response to the current crisis clearly demonstrates the tension between its efforts to leverage relations with Russia to further Chinese President Xi Jinping’s vision of “new great power relations” with the U.S., on one hand, and its recognition that being seen to align too closely with Russian President Vladimir Putin’s aggression will carry immediate costs for China’s interests, on the other.

On one side of the ledger, China has acted in ways that point, at the very least, to Beijing’s toleration of Moscow’s behavior. In the leadup to the invasion, China reportedly shared U.S. intelligence on Russia’s military preparations—provided to it by Washington as a means of convincing Beijing of the real threat of Russian military action—with Moscow. Meanwhile, the New York Times reports that Western intelligence services believe that some form of consultation between Beijing and Moscow on Russia’s plans took place prior to the invasion, although the intelligence “did not necessarily indicate the conversations about an invasion took place at the level of Mr. Xi and Mr. Putin.”

After the invasion, Beijing also eased trade restrictions on imports of Russian wheat and soybeans, which combined with increased Chinese purchases of Russian oil and gas could provide Moscow with some level of insulation against U.S. and European economic sanctions. And while Beijing’s official statements on the Russian invasion have repeated its long-held position on the sanctity of state sovereignty and the need for a negotiated settlement, it has simultaneously propagated Moscow’s position that NATO’s eastward expansion is the cause of the war. This has also been repeated with great regularity in state media.

Finally, China abstained from the Feb. 25 United Nations Security Council vote to condemn the Russian invasion, which Russia vetoed, and voted against a motion to hold a debate on the situation in Ukraine in the U.N. Human Rights Council on Feb. 28. Foreign Minister Wang Yi subsequently stated that China’s abstention in the Security Council was due to its belief that council actions “should contribute to a political settlement of the current crisis rather than incite new confrontations,” while adding that China considers economic sanctions to be a “lose-lose” approach that will “interfere with the process of a political settlement.”

On the other side of the ledger, however, there are some indications that Beijing is uneasy with the prospects of becoming collateral damage to Putin’s adventurism.

In contrast to the New York Times story noted above, The Economist’s well-informed Dave Rennie noted on March 1 that, while we may never know how much Xi knew personally about Putin’s plans, “Chinese diplomats appeared startled by Russia’s invasion. They were ‘visibly squirming’ when approached by Western counterparts in Beijing and at the UN in New York as tanks rolled in.”

The reality, too, of Putin’s effort to redraw Ukraine’s borders by recognizing the independence of the breakaway provinces of Donetsk and Lugansk, to say nothing of the attempt to overthrow the government in Kyiv with the subsequent invasion, clearly contradicts the early February joint statement’s claim that no state “can or should ensure its own security separately from the security of the rest of the world and at the expense of the security of other States.” But it is also fundamentally at odds with Beijing’s own “core interest” in countering what it sees as “separatism” and foreign intervention in Xinjiang, Tibet, Hong Kong and Taiwan.

Meanwhile, according to a senior U.S. official quoted by Reuters, China does not appear to be taking steps to assist Russia in evading the latest U.S. and European sanctions targeting Russia’s Central Bank and disconnecting it from the global SWIFT transaction network. This is important, as according to the Central Bank of Russia’s 2020 annual report, 14 percent of its foreign exchange reserves were held in China. Russia could also seek to evade sanctions by using renminbi rather than U.S. dollars for transactions with China, Ousmene Mandeng, a visiting fellow at the London School of Economics and Political Science, told the Financial Times, as “renminbi-based payments will most likely be conducted by institutions outside the immediate influence sphere of the West.” But there are reports that two Chinese state banks have in fact restricted financing for Russian commodity purchases, while the Asian Investment and Infrastructure Bank (AIIB), in which China plays a leading role, has also decided to freeze lending to Russia.

The fate of some 6,000 Chinese nationals in Ukraine has also emerged as a potential flashpoint for bilateral relations. The Global Times reported on March 1 that the Chinese Embassy in Kyiv was in the process of facilitating the evacuation of some 2,300 Chinese nationals via buses to Moldova and Poland. Given Russia’s apparent shift to siege warfare to capture major cities, including indiscriminate missile and airstrikes against civilian targets, there is clear potential for Chinese nationals to be killed or injured as long as they remain in Ukraine. Such a scenario would, at the very least, be a blow to Xi and the Chinese Communist Party’s credentials as protectors of Chinese citizens abroad, as well as a black mark against Moscow.

The current situation bears many similarities to China’s equivocal, fence-straddling response to Russia’s 2014 annexation of Crimea, when it abstained from a U.S.-led Security Council resolution condemning the move and criticized Western sanctions, while calling for the respect of Ukraine’s sovereignty and territorial integrity. One stark difference between then and now, however, is the more challenging geopolitical landscape Beijing faces today, including strategic competition with the U.S., deteriorating relations with most of its Asian neighbors and the economic impacts of its zero-COVID pandemic response.

Writing in Foreign Affairs, Jude Blanchette and Bonny Lin argued that Beijing’s calculus appears to be that, so long as it doesn’t provide military assistance to Russia, “it will at most suffer secondary sanctions for its political and economic support,” while benefitting from the fact that the U.S. and Europe will “shift their gaze away from Asia, giving China a freer hand in its neighborhood.” As Ming Jinwei, a senior editor at the state-run Xinhua News Agency, put it in a leaked post on the Chinese social media platform Weibo, Beijing’s operating assumption appears to be that “China has to back Russia up with emotional and moral support while refraining from treading on the toes of the United States and European Union,” so that in the future it can count on “Russia’s understanding and support when wrestling with America to solve the Taiwan issue once and for all.”

Such reasoning appears to seriously misjudge the way in which Russian adventurism in Ukraine will reinforce U.S., European and Asian states’ perceptions of China’s own revisionist objectives. NATO Secretary-General Jens Stoltenburg, for instance, has already described Russia and China as being aligned in an “attempt to control the fate of free nations, to rewrite the international rule book and impose their own authoritarian models of governance.” Japan, Singapore and South Korea’s decisions to sanction Russia as well also reflect a growing perception that there are significant linkages between European and Asian theaters of strategic competition between the U.S. and its allies on one hand, and Russia and China on the other.

Given this backdrop, Beijing seems to be in the position of having to choose between two bad options. Backing the “world’s most toxic man,” as WPR columnist Howard French dubbed Putin, too overtly not only risks alienating Europe and deepening the fissures with Washington, but may make China vulnerable to political and economic sanctions. But distancing itself from Moscow would likely deal a blow to a relationship that Beijing arguably needs in a period of strained relations with nearly every other major power.

Which of these options Beijing ends up choosing depends upon a deceptively simple question over what it values more: the hostility it shares with Moscow toward the existing U.S.-led international order and their complementary vision for a “multipolar” order to replace it, or China’s own narrow self-interest.

Post Views: 101
Previous Jihadis in Idlib bash Chechen leader Ramzan Kadyrov for role in Ukraine war
Next The War in Ukraine Will Make It Harder to Manage the World’s Other Crises 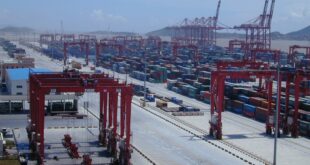 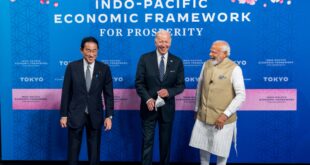 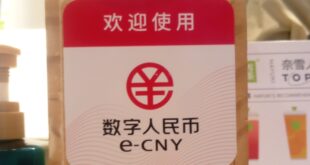