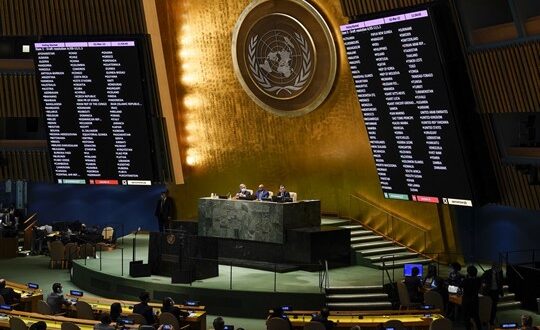 While the world remains fixated on the horrific human and political consequences of the conflict in Ukraine, there has been an undercurrent of discourse comparing the extreme attention to this conflict to the intermittent and waning interest over the past few years in civilian suffering and acts of aggression in places like Afghanistan, Syria, Yemen, Ethiopia or Somalia. More could and should have been done in those other conflicts. But there are significant reasons for acute attention to the Ukraine crisis, which might be seen as a war within a larger war—and one that is sure to have ripple effects across the globe.

To begin with, it is important to emphasize that this is only the beginning of this conflict. Since Feb. 24, an estimated 2,000 civilians and several thousand troops have died in Ukraine. It’s correct that these numbers are substantially lower than the registered counts in other conflicts. The Armed Conflict Location and Event project, a nonprofit data aggregation initiative, registered some 42,450 deaths in Afghanistan, 18,410 in Yemen and 11,000 in Myanmar in 2021 alone. But given the pattern of Russian attacks in Ukraine, which have already fallen well outside the standards of international law, the death toll there is certain to increase.

Russia has launched hundreds of missiles and artillery barrages against Ukrainian cities, which have decimated civilian squares and residential areas, and seeded medical facilities and other critical infrastructure with cluster munitions. Where Russian troops faced resistance, as in the seaside town of Mariupul, they deployed siege tactics, blocking civilian evacuation routes and cutting off food, water and electricity for those stuck inside. Despite this wreckage and violence, most Russia-watchers say that the Kremlin has been holding back, and will soon deploy even more lethal and indiscriminate weapons and tactics. With an estimated 43 million Ukrainians remaining in the target zone, the worst is yet to come.

What’s more, this crisis has the potential to have dramatic geopolitical repercussions, reverberating in ways that could worsen the political dynamics of other conflicts and crises globally. As I argued in my last column, the Ukraine crisis has crystallized the existence of a new era of Cold War politics in international relations, not just between the U.S. and Russia, but also, and arguably even more, between the U.S. and China. The return to an era of competing power projection and global influence, unchecked by fundamental norms of non-aggression, has the potential to spark proxy warfare and violence in any number of arenas. Already, there are fears that this new moment will embolden China to move on Taiwan, or that Russia’s advances will not stop at Ukraine.

A return to zero-sum competition on the global stage would also chill any remaining prospects for multilateral cooperation and crisis management. This week, deliberations in the United Nations General Assembly suggested the return of a corrosive political logic that had dominated the body during the Cold War. Member states were discussing a draft resolution decrying Russian aggression against Ukraine, which Russia had already vetoed in the Security Council. In the end, a staggering 141 countries supported the resolution, condemning Russia’s behavior and calling for its forces to withdraw. Only five opposed it, while 35 abstained.

The overwhelming support for the resolution sent an important political message of solidarity with Ukraine. But a closer look at the abstentions suggests worrying signs for future deliberations at the United Nations. From their floor statements, it was clear that many countries saw the issue not as a question of whether Russia had violated Article 2(4) of the U.N. Charter—which prohibits threats or use of force against the territorial integrity of other states—but as a vote for or against Russian and United States interests. Facing this tough choice, countries across Africa and Asia that frequently find themselves torn between competing powers simply abstained from voting.

After all, Russia is still the unquestioned global leader in at least one thing: wielding the Security Council veto. Russia and its Soviet predecessor have exercised this veto 143 times, almost double that of the U.S., which has used it 83 times, and constituting just under half of all 293 vetoes cast in the council’s history. Countries are very aware of this tendency, and no doubt many of those that abstained wanted to avoid provoking Russia’s ire, just in case it could affect the outcome of future Security Council votes.

For example, neither India nor Pakistan—both of whom abstained— would want Russia voting against them should another flare-up over the disputed territory of Kashmir come before the Security Council. Countries like Sudan, Mali, the Central African Republic, South Sudan and Congo—all of which abstained—have all had recent reminders of the protective power of the Russian veto, which has shielded them from Security Council sanctions, censure or further investigations in the past year. The United Arab Emirates reportedly abstained in the Security Council vote in order to win Russia’s support for designating the Houthis in Yemen as terrorists. The UAE ambassador to the U.N. later rejected that explanation, so perhaps it was the UAE’s growing security relationship with Russia—also an important consideration for the other abstaining countries—that was the deciding factor.

Nor was the vote dictated by a straight U.S.-Russia power dynamic. Abstentions from countries like South Africa and the belated support of countries like Egypt suggest the potential reinvigoration of the Non-Aligned Movement, the collective of states that refused to side with either the U.S. or Russia during the Cold War. At the same time, the numerous abstentions from Asian countries, many of which have friendly relations with the U.S. and good reasons to oppose cross-border aggression, hint at the chilling effect of upsetting China, which abstained from both votes. While not surprising, such voting patterns could be a harbinger of future divisions at the U.N. between great power blocs.

The resurgence of Cold War-style voting in the U.N. is concerning. If votes are no longer based on whether a specific action lives up to the U.N. Charter and other international standards, but are instead determined by political affiliation and calculation, that in itself is as serious an erosion of the rule of law as Russian aggression in Ukraine.

Moreover, stalled multilateral cooperation and crisis management can also cost lives and cause even more setbacks for human rights. Security Council stalemates in the past few years—what we might now view as precursors to the current geopolitical standoff—are a major reason why more was not done in response to the crises in Syria, Myanmar, Ethiopia and many other countries. In the past few months, while the Ukraine tensions have been absorbing attention, Russia has iced the renewal of several key U.N. monitoring panels that had been shedding light on arms trafficking, brutality and indiscriminate killing in the Central African Republic, South Sudan, Congo and Mali.

It is impossible to say how many more crucial issues and conflict resolution opportunities will be affected if the current climate of tit-for-tat political maneuvers and us-against-them voting trends continue. In the coming month, the Security Council will vote on renewing the mandate of the U.N. mission in Afghanistan, known as UNAMA. Doing so would not resolve the larger political and economic crises in Afghanistan, but maintaining a robust U.N. monitoring and reporting presence is crucial for preserving civil society space and press freedom in the country. Comments from U.S. representatives suggest they are poised to push for a UNAMA mandate along these lines. In the current political climate, that may well spark a retaliatory Russian or Chinese veto, making further degradation of Afghan rights and freedoms the next likely fallout from the Ukraine crisis.

These secondary but hardly incidental effects are what makes the ongoing conflict in Ukraine even more heart-breaking to watch. Even if there is a resolution to the Ukraine crisis this week—a prospect that seems unlikely given the few real off-ramps or exit strategies on offer—the relationship between Russia and the U.S., and between Russia and other European countries, will remain radioactive for years. As a result, the real collateral damage from this conflict is sure to stretch far beyond the territorial borders of Ukraine, or even those of Europe.