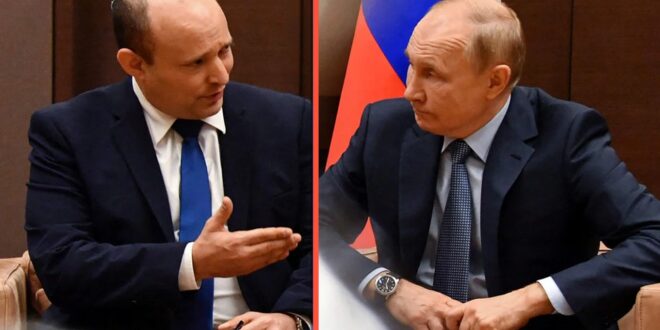 If Prime Minister Naftali Bennett secures a peace agreement, or even a ceasefire, in the war between Russia and Ukraine, he’ll be worthy of a Nobel Peace Prize. But it’s far more likely that he’s playing right into the hands of Russian President Vladimir Putin.

This isn’t a zero-sum game; it’s a win-win situation. By flying to Moscow on Shabbat to meet with Putin, and then to Berlin to meet with German Chancellor Olaf Scholz, Bennett was trying to elevate his image as a major-league player, a leader on the world stage.

But above all, this brief shuttle diplomacy trip for Bennett – who is struggling to get out from under Benjamin Netanyahu’s shadow and views his predecessor as a sort of alter ego – bolsters his status at home.

He’s gained some time and evaded the growing criticism from both Israelis and the international community regarding Israel’s shameful, unforgivable position on the Ukrainian tragedy. No other country in the Western world – to which Israel purports to belong – has failed to offer a forceful response to Russia’s aggression and impose harsh economic sanctions.

Israel, in contrast, is acting like a leaf blown along by the wind – one that trembles before Putin’s wrath. It has refused to join the international sanctions on the pretext that it has no sanctions law. Instead, Israel is making faux decisions for appearances’ sake, like announcing that oligarchs’ planes can only land in Israel en route to other destinations and for no more than 48 hours. This meaningless restriction doesn’t apply to Jewish-Russian tycoons.

For 13 days, the bloody war has raged on, with thousands killed and some 1.5 million refugees and displaced people – and Israel is still dodging a decision, and hoping to mediate between the U.S. and the West, and Russia. This sort of behavior is characteristic of the Jews who lived in the shtetls in Russia and eastern Europe. But as a powerful, sovereign nation, there’s no excuse for such cowardly behavior.

Bennett’s trip to Moscow was not only greenlighted by his deputy premier, Foreign Minister Yair Lapid, but was coordinated with the U.S. administration and European leaders. It’s hard to imagine them vetoing such a trip, when the goal (officially, at least) was to negotiate a ceasefire and stop the bloodshed.

Officials in Washington and the European capitals presumably told the Israeli premier: “Go ahead and try your luck. We hope you succeed, even though there’s no chance.” After all, it’s clear to anyone with a brain that Putin will be satisfied by nothing less than victory on the battlefield and the ouster of President Volodymyr Zelenskyy’s government in Kyiv.

Even if Bennett is inexperienced and naive, he should have easily grasped that Putin was exploiting him. Note that no other Western leader would have agreed to walk the road to Canossa – that is, make a pilgrimage to the Kremlin – without reaching some sort of understanding or compromise in advance and getting something from Putin in return.

Bennett’s phone calls and meeting with Putin were all part of a spectacle staged by the Russian president. He’s trying to create the illusion that he’s a reasonable leader with reasonable interests, rather than a bloodthirsty dictator who has shed the last of his inhibitions. In this way, Bennett is at Putin’s service.

But he is also serving his own agenda. This is the way of all Israeli governments: They disregard morality and humanitarian concerns while sanctifying their own national and Judeo-ethnic interests.

This narrow worldview and racist, nationalist ideology have led Israel to ruthlessly deport non-Jewish Ukrainian refugees. And even when it deigns to let them in, it sets ridiculous financial conditions for their entry.

No other Western country has been so hard-hearted. Or perhaps it’s more correct to say that there is no other interior minister in the world – not even Britain’s Priti Patel – is as devoid of human feeling as Ayelet Shaked. Even the “ice princess”, as Patel has been dubbed, is a scorching hot wind compared to Israel’s interior minister.

Bennett is playing a transparent and cynical game. He knows Putin chose him as a smokescreen. And even so, he has agreed to play the part assigned to him in the Russian tyrant’s rigged game. Bennett is justifying his actions by arguing that it secures Israel’s security interests – in other words, he is keeping Putin from taking revenge on Israel for flip-flopping, thereby allowing the Israeli air force to continue attacking Iranian targets in Syria.

Conspiracy theories aside, it’s still apparent that Israel and Russia have some common interests – something that is seemingly inconceivable – and these interests are opposed to those of the United States and Iran.

In recent days, Russia has imposed conditions on its consent to a new nuclear deal with Iran. It is demanding an American promise that the sanctions that Washington has imposed on Moscow won’t apply to Russian relations with Iran.

Oh, how the wheel turns. Tehran has already made it clear that Moscow’s position is disappointing; it wants to secure a new deal as quickly as possible. But Israel, which doesn’t want an agreement, is encouraged by Russia’s position and is hoping that it can thwart a deal entirely.

This set of common interests serves Bennett. This is just another justification for his cowardly flight to the hazy shores of what Israel calls its “national interests.” To hell with values like justice, compassion, and humanity. Bennett, just like his predecessor, is evidently more interested in press releases and photo ops.

Post Views: 67
Previous Turkey, Israel in Race to Mediate Between Ukraine and Russia
Next If Ukraine Falls Does the Democratic Party Fall as Well?