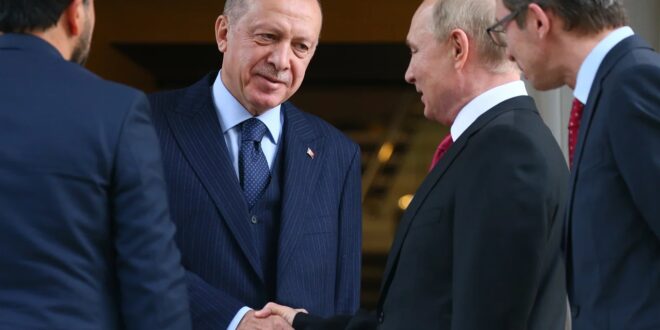 Turkey, Israel in Race to Mediate Between Ukraine and Russia

At the so-called White Palace in Ankara, the official residence of Turkish President Recep Tayyip Erdogan, preparations are in high gear for President Isaac Herzog’s visit on Wednesday. Erdogan’s colorful presidential guard will welcome him, his presidential band will play “Hatikva” and the Turkish anthem and the two presidents are expected to announce that their countries are turning over a new leaf in their relationship.

But no one will know whether the two will announce that relations are resuming at the ambassadorial level – and, if so, when the new ambassadors will take their posts – until the end of the visit.

Bad blood has been flowing between the countries for a dozen years now, starting from Israel’s botched raid on a Turkish-sponsored flotilla to the Gaza Strip in 2010 through mutual finger-pointing by Erdogan and former Prime Minister Benjamin Netanyahu to Erdogan’s claim that Israel is a “terror state.” But while their public relationship resembled a messy divorce, under the surface, in the fields of commerce and intelligence, interests took precedence over caprice.

One can only hope that the renewed relationship will last and that the countries’ disagreements can be resolved through polite diplomacy. Both countries have common interests, both have opened unexpected channels to the Arab world, both fear Iran and now Russia as well and both are participating in the race to mediate between Russia and Ukraine.

But Russia’s invasion of Ukraine swept Erdogan’s diplomatic ambitions away like so much dust and confronted Turkey with a dilemma. Ankara has sold Turkish-made combat drones to Ukraine and signed an agreement to produce the drones there. When Russia scolded it for the drone sale, Ankara said it was a deal between private companies rather than government aid to Ukraine. But government spokespeople forgot to mention that the private company in question, Baykar, is owned by Erdogan’s son-in-law, Selcuk Bayraktar.

Turkey sees Ukraine as part of its regional sphere of influence, and also as a buffer between itself and Russia, especially since the latter occupied the Crimean Peninsula in 2014. On the other hand, Russia is one of Turkey’s main trading partners, a major source of tourists and its chief supplier of oil and gas. On top of all that, it enables Ankara to play power games with the United States and the European Union, including by threatening to quit NATO. For instance, Turkey’s purchase of Russian S-400 anti-aircraft systems drove Washington and senior NATO officials into a frenzy.

In the meantime, Turkey has changed course. In a phone call to Putin, Erdogan called for an immediate ceasefire in Ukraine; before that, Turkey supported the UN Security Council and General Assembly resolutions harshly condemning the Russian invasion. Erdogan also reminded Putin about the upcoming Antalya Diplomatic Forum from March 11-13, which he expects Russian Foreign Minister Sergey Lavrov and his Ukrainian counterpart Dmytro Kuleba to attend. Russia has already said that it “welcomes the Turkish initiative.” But that welcoming attitude has not yet stopped Russia from pressing its advance into Ukraine.

As Erdogan was trying to mend the tear in the Russian-Ukrainian fabric and pocket some diplomatic gains for himself, he discovered that he has a competitor. Prime Minister Naftali Bennett’s quick, “secret” trip to Moscow on Saturday, and then to Germany to meet with Chancellor Olaf Scholz, made clear to Erdogan that he is not the only horse in this race for glory. Israeli Foreign Minister Yair Lapid will also attend the Antalya forum, where he is due to meet with Turkish Foreign Minister Mevlut Cavusoglu. Perhaps Ukraine will turn out to be the issue that manages to bring them closer together, as Lapid has hitherto turned a cold shoulder whenever Turkey pushed to renew its relations with Israel.

It would be best not to hold out hope for dazzling results from Turkey and Israel’s mediation efforts. Where Russia is concerned, they both have their own interests and concerns. But while Israel is clumsily hopping between its desire to ensure its freedom of military action in Syria and its total dependence on the United States, Turkey is talking about an existential threat. Russia’s seizure of the Crimean Peninsula brought the Russian Army very close to Turkey’s border.

Having taken Kherson and setting its sights on Odessa, Russia could fully establish its presence in the Black Sea and infringe on Turkey and the West’s freedom of movement in this region. The possibility that Russia could install ballistic missiles – or even missiles carrying nuclear warheads – in occupied Ukrainian territory, has not been lost on U.S., European and Turkish intelligence. An anti-Russian stance by Turkey could also affect the gas and oil pipeline that fuels Turkish heaters and gas stations, and cause the flow to be cut off in the strategic TurkStream natural gas pipeline that runs from Russia to Turkey.

With the full package of interests and threats laying like a ticking bomb at Israel and Turkey’s doorsteps, the two countries have a shared basis to rapidly promote a diplomatic solution. Their relative advantage is the ties they maintain with both of the warring countries. There’s just one small question left unanswered: Does Putin even take these two countries’ mediation efforts seriously at all?