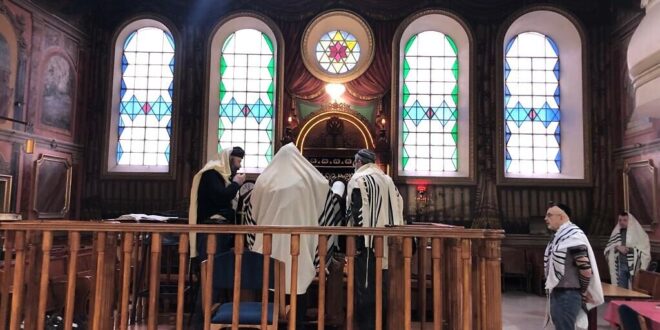 On a Friday night in Lviv, Ukraine, when a synagogue became a sanctuary

With only one Jew, no ritual wine, and no communal prayers on Shabbat eve, a shul with a history of resistance fulfills its holiest mission

The darkness over Lviv was indeed thick on the walk to the Beis Aharon V’Yisroel Synagogue on Friday night.

With the country under invasion by Russia, streetlights were out in Ukraine’s major western city and the shops were closed.

Even in the shadows, there were signs of war everywhere. Families hurried along the uneven sidewalks, the wheels of their suitcases clacking as the refugees made their way to whatever temporary housing they could find. Sandbags clogged the windows of closed coffee shops.

I was looking forward to the desperately needed respite that Shabbat offers every week — the familiar tunes, the detachment from worries to focus on community and God.

But there would be no songs and no community in Lviv on Friday night.

Known as Lemberg in Yiddish, Lviv, once one-third Jewish, was a major Jewish religious and cultural center.

Until it wasn’t. Ukrainian nationalists and Nazi Einsatzgruppen death squads unleashed horrific violence on Lviv’s Jews in June and July of 1941, with German propaganda troops filming Jewish women being stripped naked and beaten. Almost all of the city’s Jews were murdered in the ensuing three years.

One of Lviv’s few Holocaust survivors is the synagogue. Only it and the Jakob Glanzer Shul were left standing after the wartime devastation. Like many survivors, it is faded and worn, but not far beneath its tired surface lie hints of a vigorous past.

I knocked on the metal gate before the start of Shabbat, and was greeted by the guard, an elderly but tough-looking non-Jewish Ukrainian.

I signaled to him that I was here for prayers, and though he shook his head and said something that sounded apologetic in Ukrainian, he stepped aside to let me through.

At Rosh Hodesh (new moon) prayers that morning, I had been assured there would be services at 6:00 p.m., but the synagogue was silent and gloomy. Cartons filled with toiletries and dried goods crowded the foyer.

The sanctuary, its lights so low that the intricate murals on the walls and ceiling were barely perceptible in the shadows, was nearly empty.

Two young women sat along the wall on the right side of the room, scrolling intently through their phones. Otherwise, all was still.

Fortunately for me, they both spoke excellent English. The women, Oksana and Nastya, explained that they come from the northeastern city Kharkiv, and work in customer support for the New York-based e-commerce company Wiserbrand.

They had been hunkered down in their apartments since the beginning of the invasion, continuing to work from their darkened homes as Russia bombs fell closer and closer, including on a nearby tractor factory.

Nastya told me that Russian jets had been bombing a nearby Ukrainian army tank academy for days.

One night, Oksana saw four Russian soldiers running through the woods outside her home, and Ukrainian troops moving through the same copse the next day.

Finally, the women decided they had been through enough.

“Day 9 had come,” said Oksana, “when the center of Kharkiv was bombed, this was a breaking point in making a decision to flee.”

Wiserbrand rented houses in western Ukraine for its employees, and they decided to try to make it, with Oksana’s opinionated tomcat George in tow.

The taxi to the train station cost 1,000 hryvnia ($33), ten times the normal cost. They could hear bombs falling on Kharkiv as they sped to the depot.

The trip was nightmarish, the women said. “The wagons were stuffed to the brim, with 5 people on each lower bench, 2-3 people on the second upper shelves, some even slept on the baggage shelves. It was hard to breathe, not enough oxygen,” said Oksana.

Even more passengers got on in Kyiv.

Nastya and Oksana had no idea where they would spend the night in Lviv before heading on to the city of Stryi, 70 kilometers (43 miles) to the south.

They asked for suggestions in their company’s chat group, and an Israeli colleague named Yossi urged them to call the rabbi in Lviv, a New York-born Karlin-Stolin Hasid named Mordechai Shlomo Bald.

The women tried calling Bald too late, as it was already Shabbat in Israel, where Bald had brought his family to safety with the intention of returning in the coming days. With no answer, and no other options, they pressed ahead to the synagogue.

The guard and the janitor, a matronly blond Ukrainian named Marina, let the women inside, and showed them into the sanctuary.

“We were met very kindly with respect and felt at home,” said Oksana, “we were offered to stay over and were very happy about it. This was such a relief after all we went through, all the stress and pain, when we could just stop, just breathe, and get peace of mind.”

Oksana and Nastya had never been inside a synagogue before, and were eager to walk around and explore the paintings, the carvings, the ark. Not wanting to be disrespectful, they asked before doing anything or taking any pictures.

Pretty soon, George was eager to get out of his carrying case as well, having spent a day cooped up surrounded by strange sounds and smells. The women let him poke around the sanctuary then let him stretch his legs in the synagogue courtyard, the feline chattering away all the while.

“When we came to Lviv, we thought we were going to bring back atara lyoshna, bring back the past glory of Judaism,” Bald told The Times of Israel by phone from Beitar Illit on Friday. “Little did we know people would be so downtrodden.”

“We had to get down to the nitty-gritty of food, medicine, clothing, and not talking about anything spiritual. You don’t talk to people about that when they have to fight for every drop of food,” he said.

When Bald arrived in Lviv more than thirty years ago, he set about starting educational projects and extracurricular programs. Bald ran a Jewish school for more than 25 years until funds dried up.

His philosophy was to encourage young Jews to leave Ukraine for Israel, the US, and Canada, where they would have more religious and professional options. Now, with only 20-30 men showing up for Shabbat prayers, Bald has regrets about his approach.

“I think Chabad was partially right and I was wrong,” he reflected. Chabad is a Hasidic movement known for its Jewish world outreach that developed a wide network in post-Soviet Ukraine.

“Now we’re always starting from the beginning,” he said. “You don’t have the people singing and dancing to create an atmosphere.”

Since the start of the Russian invasion, Bald, his wife Sarah, and some of their daughters have been working around the clock to keep people fed and sheltered, and figure out how to help people leave the country.

Some community members pick up supplies from the synagogue, while volunteers bring boxes to the elderly and infirm. The Bald family also arranged deliveries of kosher food to other cities.

With a reputation as someone who knows how to get things done, Bald’s number has been shared well beyond the Jewish community. He helps anyone who calls.

“Literally dozens and dozens of people calling all the time,” he said, many of them asking for help finding medicine. “I don’t know who gave my number. We’ve ordered from Germany, from Poland, and anyone I can find in the chats, please, please send over as much medicine, and then we’ll find someone to send it out to other cities.”

But not all of his efforts have ended well. Bald arranged transportation into Poland for a 95-year-old Holocaust survivor, he said. When she got there, none of the organizations on the Polish side of the border helped her find accommodation. She ended up being robbed and sent back home to Ukraine, Bald said, with anger in his voice.

“Right now we’re focusing on just the basic physical needs, and also shelter of course,” Bald said. “But if we get to the next step, start to give them a little psychological and spiritual help, that would be great right now.”

A refuge for my poor people

On Friday night, I was the only Jew in the synagogue, and there would be no communal prayers. But the old synagogue was serving the physical needs of many.

A baby was crying in the women’s gallery, and the ghostly shape of a young mother flitted behind the lace curtains, cooing to her child. They were not Jewish, but the second floor of the synagogue was their home right now.

Kosher food arrived at 8:00 p.m., and I enjoyed my cold but much appreciated Shabbat meal with the women from Kharkiv.

As we ate, and George sniffed around irascibly, families came through the synagogue’s door every few minutes to be greeted in the foyer by Marina.

After a short conversation in Ukrainian, she would quickly put together a box of supplies and hand it to the parents while little blond children peered curiously into the cavernous sanctuary. Marina didn’t smile, but her tone was one of grandmotherly concern.

I did not get to hear the familiar tunes and prayers that I so longed for after a week in a foreign country at war. But the scene that night would have been familiar to generations of my ancestors in Zhytomyr, in Bessarabia, in Lithuania. Weary travelers and refugees eating and sleeping in the synagogue, as neighbors hurried along in the cold night on the uneven cobblestones outside.

In you, refuge for My poor people will be found.

Though no communal prayers were said at the Beis Aharon V’Yisroel Synagogue on Friday night, and there was no wine on which to recite the Shabbat kiddush, a scene of immense holiness was taking place in the weary synagogue.

Inside its walls — those same walls that had the strength to withstand the ravages of the Nazis — people took refuge.

In the flickering light of ner tamid, the eternal flame over the ark, mothers, babies, young professionals, even a grumpy cat — none of them Jewish, all of them tired, scared and innocent — found a sanctuary.