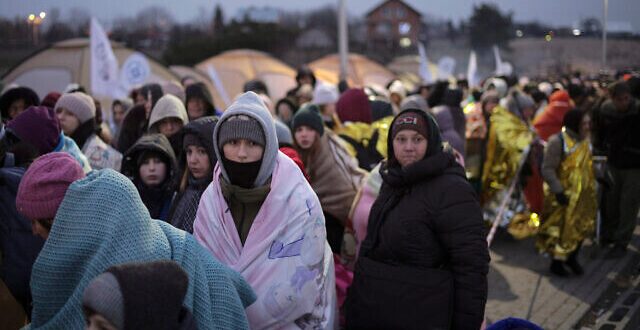 Providing safe passage ‘into the arms of the country that is currently destroying yours is nonsense,’ says UK minister, backing Kyiv’s stance as Russians keep up bombing campaign

Russia on Monday said it would cease bombing in certain areas to allow civilians to leave Ukraine, after attempts to evacuate people Sunday were stalled by relentless Russian shelling, Kyiv said.

But with Belarus backing the Russian invasion, Ukraine rebuffed any talk of having its citizens flee into the arms of their attackers.

“This is not an acceptable option,” Vereshchuk said of Russia’s safe passage proffer.

The civilians “aren’t going to go to Belarus and then take a plane to Russia.”

Earlier, a spokesman for Ukrainian President Volodymyr Zelensky called the proposal “completely immoral,” according to the Reuters news agency.

“Providing evacuation routes into the arms of the country that is currently destroying yours is nonsense,” said UK Europe Minister James Cleverly.

The Russian army said earlier on Monday it was opening humanitarian corridors from the capital Kyiv, the second-largest city Kharkhiv in the east, the southeastern port of Mariupol on the Sea of Azov, and Sumy, near the eastern border with Russia.

Even as Russian army spokesman Igor Konashenkov announced the start of ceasefires at 9 a.m. local time Monday to allow civilians to escape, Russia continued to bombard Ukrainian cities and fighting was still ongoing in the four cities where corridors were supposed to lead from.

Russian forces aimed heavy fire on the city of Mykolaiv, 480 kilometers (300 miles) south of the capital, according to Ukraine’s General Staff. Rescuers said they were putting out fires in residential areas caused by rocket attacks.

Shelling also continued in the suburbs of Kyiv, including Irpin, which has been cut off from electricity, water and heating for three days.

“Russia continues to carry out rocket, bomb and artillery strikes on the cities and settlements of Ukraine,” the General Staff said.

Two recent attempts to allow thousands of civilians to leave the besieged city of Mariupol have ended in disaster, with civilians under fire and both sides accusing each other of violations.

“Instead of humanitarian corridors, they can only make bloody ones,” Zelensky said Sunday. “Today a family was killed in Irpin. Man, woman and two children. Right on the road. As in a shooting gallery.”

The Ukrainian government is proposing eight humanitarian corridors, including from Mariupol, that would allow civilians to travel to the western regions of Ukraine, where there is no Russian shelling.

“We demand that the Russian Federation stop manipulating and abusing the trust of the leaders of France, China, Turkey and India,” Vereshchuk said.

The Russian proposal was reminiscent of similar ones in Syria. In 2016, a joint Russian and Syrian proposal to set up humanitarian corridors out of besieged opposition-held eastern Aleppo was deeply criticized on humanitarian grounds. Human rights activists said the tactic, coupled by brutal sieges, effectively gave residents a choice between fleeing into the arms of their attackers or dying under bombardment.

The handful of residents who managed to flee Mariupol before the humanitarian corridor closed said the city of 430,000 had been devastated.

“We saw everything: houses burning, all the people sitting in basements,” said Yelena Zamay, who fled to one of the self-proclaimed republics in eastern Ukraine held by pro-Russian separatists. “No communication, no water, no gas, no light, no water. There was nothing.”

Russia has made significant advances in southern Ukraine as it seeks to block access to the Sea of Azov. Capturing Mariupol could allow Moscow to establish a land corridor to Crimea, which Russia annexed from Ukraine in 2014 in a move that most other countries considered illegal.

But much of the Russian advance has become stalled, including an immense military convoy north of Kyiv.

Russian President Vladimir Putin has vowed to “neutralize” Ukraine “either through negotiation or through war,” and expectations remain low for a third round of Russian-Ukrainian talks set for Monday.