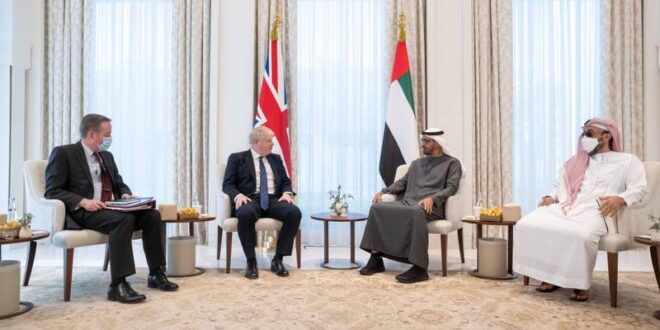 The two leaders reviewed efforts to strengthen ties and discussed the “humanitarian impact” of the unfolding crisis in Ukraine and the importance of maintaining global security.

They met at Al Shati Palace before Mr Johnson left for Saudi Arabia for talks with the country’s Crown Prince Mohammed bin Salman in Riyadh.

“I was pleased to meet with my friend, UK Prime Minister Boris Johnson in Abu Dhabi today,” Sheikh Mohamed wrote on Twitter.

“We discussed ways to further strengthen our robust strategic ties, the importance of maintaining global energy security and the humanitarian impact of the situation in Ukraine.”

State news agency Wam said the foremost issue was “the Ukrainian crisis and its humanitarian repercussions, and the importance of intensifying international efforts to support the humanitarian situation of civilians”.

In a statement from Downing Street in London, a spokesman said that the prime minister set out his “deep concerns” about Russia’s invasion of Ukraine, and stressed the importance of “working together to improve stability in the global energy market”.

“The leaders welcomed the long-standing partnership between our two countries and discussed opportunities to increase collaboration between the UK and UAE on energy security, green technology, and trade”, according to the statement.