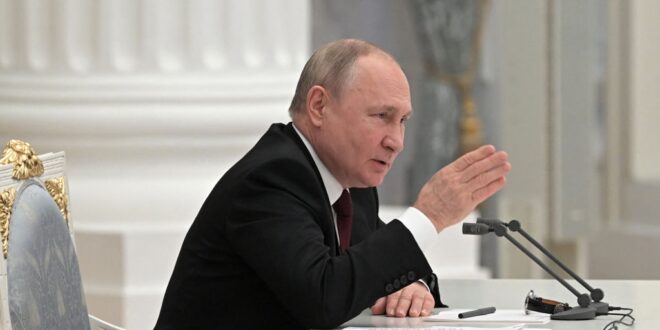 President Vladimir Putin says the sanctions imposed against Russia over its offensive in Ukraine are doomed to failure.

The West has “one aim: the destruction of Russia” but its “economic blitzkrieg against Russia has failed,” Putin stated during a televised government meeting on Wednesday.

The Russian president said keeping his country in check was one of the West’s long-term policies. Putin said the economic sanctions were short-sighted. He added that the conflict in Ukraine had merely been a pretext for the West to impose sanctions. “The West doesn’t even bother to hide the fact that its aim is to damage the entire Russian economy, every Russian.”

The president also announced an “increase of all social payments in the near future,” saying Western countries were after hitting every Russian family with the sanctions. Putin said inflation and unemployment would rise, but he pledged support to families with children. Structural changes to the economy would be needed, he added.

The Russian president saw the strengthening of Russia in the West’s hostile actions. “Behind the hypocritical talk and today’s actions of the so-called collective West are hostile geopolitical goals. They just don’t want a strong and sovereign Russia.”

Putin also said in his remarks that he would not allow Ukraine to become a “springboard” used to threaten Russia. “The operation is developing successfully and in strict accordance with plans.” Russia, he added, had no choice but to send in troops. “We will not allow Ukraine to serve as a springboard for aggressive actions against Russia.”

Elsewhere in his remarks on Wednesday, Putin accused the United States and its allies of engaging in an unprecedented information campaign against Russia.

The administration of US President Joe Biden has imposed harsh economic and banking sanctions on Russia in response. Biden has said the sanctions would limit Russia’s ability to do business in dollars, euros, pounds, and yen.

The US has also been working with the Group of Seven (G-7) nations to revoke the “most favored nation” trade status for Russia.

China and several other countries have denounced the anti-Moscow sanctions as “illegal.” Chinese Foreign Minister Wang Yi recently said any sanctions would hurt all parties amid a pandemic-hit global economy.