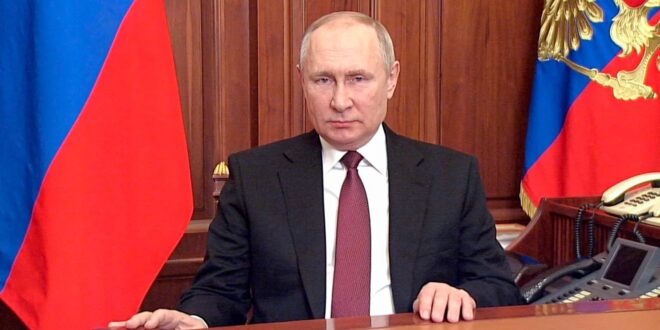 Putin Begins To Purge His Military And Intelligence Agencies For His Failure In Ukraine.

Following Russia’s failure to invade Ukraine, reports have now surfaced that Russia’s Federal Security Agency (FSB) had been under scrutiny with news of its leaders being interrogated and detained. The news comes as Russia’s invasion of Ukraine enters its third week, with the Russians not being able to take Kyiv as it had been hampered with logistical and morale challenges.

Sources had reported that Sergey Beseda, the head of the FSB’s foreign intelligence branch Fifth Service and his deputy, Anatoly Bolyukh, had been placed under house arrest for providing inaccurate intelligence reports on Ukraine prior to its invasion.

Andrei Soldatov, Russian dissident and co-founder of Agentura, an investigative monitoring website that observes the FSB and other Russian agencies, has said that his inside sources within the FSB have confirmed the detainment of the two high-ranking officers. Exiled Russian human rights activist Vladimir Osechkin also confirmed the reports. According to him, FSB officials searched an additional 20 addresses of Beseda’s colleagues around Moscow who were under suspicion of contacting journalists.

“The formal basis for conducting these searches is the accusation of the embezzlement of funds earmarked for subversive activities in Ukraine,” Osechkin said. “The real reason is unreliable, incomplete and partially false information about the political situation in Ukraine.”

Observers have said that Moscow expected much faster progress in its conquest of Ukraine that began on Feb. 24. The Kremlin was expecting Zelensky, who the believed as unpopular to fold up the initial attacks. However, that was not the case. The Ukrainians have defended their positions fairly well when compared to Russia’s military abilities.

“People did not make clear to [President Vladimir] Putin the reality of the situation,” said an anonymous French intelligence source to the Moscow Times. “The system is hardening up, bunkering down so that Putin does not receive too much bad news,” he added.

Putin Was Fed The Wrong Information By The FSB

The arrests of some of Putin’s closest political allies point toward the Russian leader’s growing displease at the results of the invasion of Ukraine. “Putin has finally understood that he was misled,” said Soldatov in a statement made to the Times.

Beseda and his deputy Bolyukh are reportedly under custody for allegations of corruption and for providing false information regarding Ukraine. FSB’s Fifth Service is responsible for gathering intelligence in Ukraine.

“Both men have played a major role in intelligence operations against Ukraine for several years and highly likely played a major role in the planning for the invasion of Ukraine. If claims of arrest are correct, this would indicate that Putin is seriously concerned about the FSB’s role in the military campaign, and there could be significant changes at senior levels in the FSB,” said an anonymous western official who was aware of the convictions.

Beseda was reportedly in Kyiv in February 2014 when protests against the then pro-Moscow administration led to around 100 Ukrainians being shot dead by the police, with then-President Viktor Yanukovych feeling to Russia shortly after.

Soldatov said that the intel produced by the FSB regarding the climate in Ukraine during the buildup of the invasion was “simply not right, which is part of the reason as to why things have gone so badly for Russia.” He added that their assessment of pro-Russian support among Ukrainian and the extent of possible resistance were “terribly miscalculated.”

“The problem is that it is too risky for superiors to tell Putin what he doesn’t want to hear, so they tailor their information. The tailoring probably takes place somewhere between the rank of colonel and general in the FSB. We can’t rule out the fact that the intelligence they gathered on the ground was, in fact, very good.”

Purge In The Russian Military

Officers being sacked within Russia’s military has been reported throughout the past week. Ukraine’s Defense Secretary Oleksiy Danilov claimed that Putin has opted for a change of strategy and has fired around eight high-ranking military officers.

“They had about 8 generals removed from their posts because they did not complete the task. Now new ones have been appointed. We clearly understand what is happening in the Russian Federation. Moreover, I can say that they are desperate,” Danilov said.

According to the daily tally of Ukrayinska Pravada, Russia has lost about 13,800 troops, with hundreds of soldiers held as POWs as of the 21st day of fighting. Reports of several high-ranking officers being killed in combat have also been reported, with the fourth Russian general, Major General Oleg Mityaev who heads the 150th motorized rifle division, being killed in action while storming the city of Mariupol.

Given the nature of politics in Russia, these moves may be a way for Putin to save face in the midst of failure, by blaming subordinates(handpicked by him) for the intelligence and military failures of the Ukraine war. It is also possible that these dismissals and arrests of military officers and intelligence officials represent those who might depose him in a coup or force him to step down from office because of that failure.