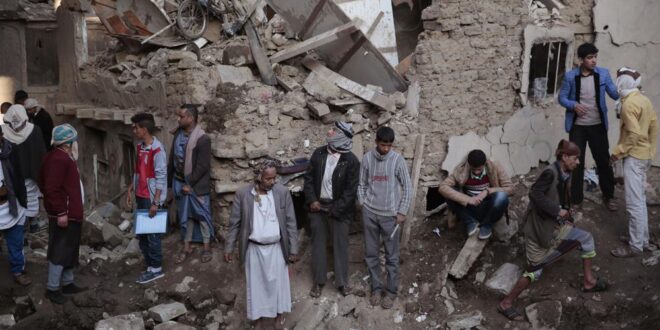 The Saudi-based Gulf Cooperation Council on Thursday invited warring sides in Yemen for talks aimed at ending the civil war in the Arab world’s most impoverished country, a conflict now in its eight year.

However, Yemen’s Iran-backed Houthi rebels have already rejected Riyadh — the Saudi capital were the GCC is headquartered — as venue for talks. A Saudi-led coalition has been at war in Yemen since 2015, seeking to restore the internationally recognized government to power. The Saudis have been trying to oust the Houthis from key territories, such as the capital of Sanaa, which the rebels control.

The Houthis said they would not attend talks in Riyadh, saying Saudi Arabia cannot be a mediator or host since it’s a party in the war. The Houthis say they would instead be open to talks in a “neutral country.” GCC member states Kuwait and Oman have attempted to mediate in the past.

For more than a year, the Iran-backed rebels have pushed back against U.N. and U.S. efforts to relaunch peace talks, focusing instead on trying capture the city of Marib to complete their control over the northern half of Yemen. That effort has resulted in significant losses for the Houthis as they battle Yemeni forces supported by Saudi air power and Emirati-backed fighters.

Yemen’s conflict erupted in September 2014 when the Houthis overran the capital and forced the government into exile. The war has killed tens of thousands of people, including at least 14,500 civilians.

A U.N. appeal on Wednesday raised $1.3 billion, less than a third of what had been targeted to help Yemenis avoid starvation. Some 161,000 people are likely to experience famine in Yemen in 2022.

GCC Secretary-General Nayef al-Hajraf told reporters Thursday that the talks — planned for March 29 through April 7 — were the latest effort to try and bring the Yemenis to the negotiating table.

“The solution to the crisis is in the hands of Yemenis,” he said.

Al-Hajraf did not name the Houthis specifically but said the GCC “invites all Yemenis without exception to take part in these talks with the goal of discussing political, military, security, economic and development obstacles in Yemen.”

He stressed the location of the venue for the talks should not be the focus of concern.

The Houthis had already said Wednesday — following reports by Reuters about the GCC effort — that they would not take part in talks in Saudi Arabia. Without the group at the table, it’s unclear if any progress can be made.

There have been no substantial peace talks since the 2018 negotiations in Sweden that ended fighting in and around the port city of Hodeida.

Since then, the Houthis have pressed offensives in northern and central Yemen, reaching the outskirts of the crucial city of Marib, the last stronghold for the government in northern Yemen. The Houthis control northern regions bordering Saudi Arabia.

Post Views: 141
Previous Xi and Biden Talk Ukraine
Next Putin Begins To Purge His Military And Intelligence Agencies For His Failure In Ukraine.