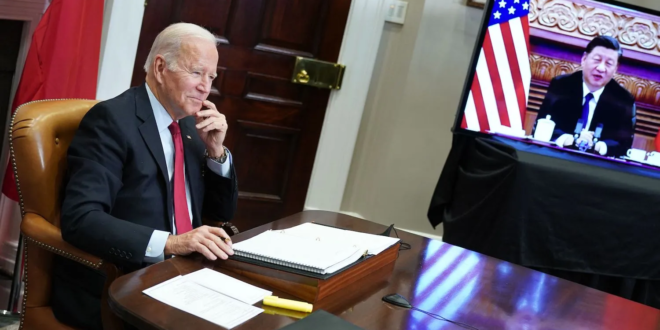 U.S. President Joe Biden will urge Chinese President Xi Jinping to avoid helping Russia in its war in Ukraine when the two men speak in a phone call later today.

The U.S. message to China before today’s call has been one of caution. News reports citing U.S. officials earlier this week suggested Russia had sought assistance from China after the war began late last month. And on Thursday, U.S. Secretary of State Antony Blinken said today’s conversation “will make clear that China will bear responsibility for any actions it takes to support Russia’s aggression, and we will not hesitate to impose costs.”

U.S. National Security Advisor Jake Sullivan and his Chinese counterpart Yang Jiechi laid the groundwork for today’s call on Monday, when the two met for seven hours in Rome. The meeting, which covered Taiwan as well as Ukraine, was described as “intense,” reflecting “the gravity of the moment,” by one U.S. official.

China’s position since Russia’s invasion has been curious for its more full-throated support of Moscow, when other friends of Russia in the region, like India, have adopted a less strident tone—though New Delhi has abstained from U.N. votes and explored financial mechanisms that could help Russia evade sanctions.

Bonnie Glaser, a China expert at the German Marshall Fund, said that while it has talked a big game, it’s too soon to tell whether China will materially support Russia, either militarily or economically, pointing to the fact that there’s been no public evidence yet of Chinese military transfers to Russia or signs that China is looking to circumvent Western sanctions the same way it has in the cases of Iran and North Korea.

Glaser sees China’s support for Russia, especially in the initial stages of the war, as a strategic gamble: “They may have believed that this conflict would drive wedges between the U.S. and Europe. Maybe they thought that Europe wouldn’t cut off gas from Russia and wouldn’t want to join in the U.S. and the sanctions.”

Ultimately, the move may prove a blunder from a leader who has spent the last two years inside the country while it battles its COVID-19 epidemic. “I think there’s a really high probability that Xi Jinping has made some bad decisions in this war, which is partly a function perhaps of getting bad advice within his own system, but also for being so isolated from other leaders in the rest of the world,” Glaser said.

Within China, Xi must balance a rising tide of anti-Western sentiment that reflexively sides with Russia with the more restrained bureaucrats who would rather avoid unnecessary conflict. As FP’s James Palmer explained in the latest FP China Brief, those constituencies fall into three groups.

“The first is China’s diplomatic establishment, which sees the conflict as a danger to steer clear of and to some degree is aware of China’s past pledges to Ukraine. The second is the nationalist entrepreneurs both in the media and inside the Ministry of Foreign Affairs, who have been rewarded in their careers for taking aggressive anti-U.S. positions.” The third is China’s military, which “may be the biggest advocates for Moscow inside the Chinese government,” Palmer writes.

Palmer largely agrees with Glaser that China’s actions deserve greater scrutiny than any statements of support: “Russia can’t even get Kazakhstan on board for this war. They’re not going to get Beijing,” he said.