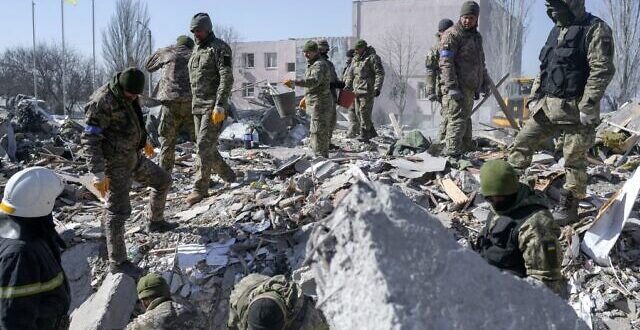 Soldier at military facility in Mykolaiv estimates that death toll from Russian bombing on Friday could be around 100, as rescue operation continues at destroyed site

Dozens of soldiers were killed when Russian troops bombed a Ukrainian military barracks in the southern city of Mykolaiv, witnesses told AFP on Saturday while a rescue operation was underway.

“No fewer than 200 soldiers were sleeping in the barracks” when Russian troops struck early Friday, a Ukrainian serviceman on the ground, 22-year-old Maxim, told AFP without providing his last name.

“At least 50 bodies have been recovered, but we do not know how many others are in the rubble,” he said.

Another soldier estimated that the bombing could have killed around 100 people.

Authorities have not yet released an official death toll.

The military facility located in the north of the city was fully destroyed after being hit by several rockets Friday morning.

“Yesterday, ‘orcs’ hit our sleeping soldiers with a rocket in a cowardly manner,” Vitaly Kim, head of the regional administration, said in a video on Saturday, using the Ukrainian nickname for Russian forces.

“A rescue operation is underway,” he added. He did not provide further details, saying he expected to receive official information from the armed forces.

AFP journalists at the site earlier in the day saw the bodies of three people, including a shredded corpse extracted from under the rubble by rescue workers.

“We are continuing to count but it is impossible to know given the state of the bodies,” a rescuer told AFP.

Mykolaiv’s mayor Oleksandr Senkevych told local journalists that the city, which had a pre-war population of nearly half a million residents, had been struck from the neighboring region of Kherson, now under Russian control.

For days, the Russians have bombarded Mykolaiv, which lies on the road to the strategic port city of Odesa some 130 kilometers (80 miles) down the Black Sea coastline.