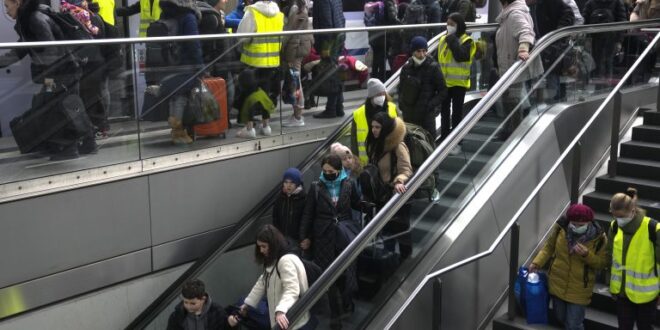 Over 3 million Ukrainian refugees have fled the country in only three weeks, and Russia’s war has already taken over 1,800 civilian lives.

On average, more than 75,000 children have become refugees each day since Russia’s invasion of Ukraine three weeks ago.

Adding to international condemnation of Russia’s invasion, the International Court of Justice, has ordered Russia’s military and any supporting forces to “immediately suspend the military operations.”

Since Russia invaded Ukraine on February 24, over 3 million Ukrainian refugees have fled the country in only three weeks, and 1.9 million Ukrainians have been internally displaced. After eight years of war in parts of the east, the escalation and widespread damage wrought by Russia’s invasion have dramatically impacted humanitarian needs in Ukraine. The war has already taken over 1,800 civilian lives. Some besieged cities, like Mariupol and Kharkiv, are facing dire circumstances, with life threatening shortages of food, water, electricity, or heat, as temperatures drop below freezing at night. Rampant violations by Russia of temporary ceasefires have imperiled many attempts to facilitate civilian evacuations. The indiscriminate nature of Russian attacks has meant destruction of civilian infrastructure, to include a hospital maternity ward. Samantha Power, head of the U.S. Agency for International Development (USAID), said on Tuesday, “Putin doesn’t seem to know how to fight another way than this way. This is the Grozny approach. This is the Aleppo approach.”

Following the Ukrainian government decree for men between 18 and 60 years of age to stay in the country and remain available for conscription, the humanitarian crisis has taken on significant gendered dimensions. The vast majority of refugees are women and children, prompting concerns for their increased risk of exploitation and abuse. UNICEF reported that, since Russia’s invasion of Ukraine three weeks ago, over 75,000 children on average have become refugees every day. Poland alone has welcomed over 1.8 million Ukrainian refugees, with many others heading to Romania, Moldova, Hungary, and Slovakia. The European Union (EU) has responded to the refugee crisis in a rapid fashion, facilitating temporary protection to live, study, and work in the EU for up to three years. However, for Asian and African refugees fleeing Ukraine, the double standard in the political response to Ukrainian refugees has been stark, with many detailing discriminatory measures on the borders and increased administrative obstacles to finding support and assistance. Moreover, it contrasts sharply with the reception—and perception—of many Europeans to the influx of Syrian and Afghan refugees and asylum seekers in recent years, even as many Western countries have been parties to the conflicts over time.

Following Ukrainian President Volodymyr Zelenskyy’s address to Congress in the U.S. on Wednesday—in which he called for additional sanctions and a no-fly zone over Ukraine—President Biden announced an additional $800 million in military assistance, as part of a $13.6 billion emergency package of humanitarian, security and economic assistance approved by Congress last week. Biden will also travel to Brussels next week to attend an emergency NATO summit to “reaffirm our iron-clad commitment to our NATO allies,” Press Secretary Jen Psaki stated. Peace talks continue in parallel, with Russian and Ukrainian officials sharing cautious optimism yesterday about their possible trajectory. Zelensky declared to Congress that “the positions during the negotiations already sound more realistic.” Nonetheless, battlefield dynamics—and repercussions for civilians—only continue to grow more complex as more foreign fighters join both sides of the conflict.

Adding to international condemnation of Russia’s invasion, the International Court of Justice (ICJ), the principal judicial organ of the United Nations, tasked with settling legal disputes submitted to it by states, issued on Wednesday a determination on Ukraine’s injunctions request against Russia. The ICJ ordered Russia’s military and any supporting forces to “immediately suspend the military operations” begun February 24. Realistically, the decision illegally binding, it is not expected to impact Russian military operations in Ukraine, though it is expected to further isolate Russia diplomatically and lay the groundwork for potential future legal actions at the international level. In the UN Security Council, Mexico and France recently put forth a draft resolution on the humanitarian situation in Ukraine, to which Russia responded with its own draft. For France and Mexico, the intention was to try and isolate the humanitarian issue from the political one, as was done in Syria, and allow for the creation of humanitarian channels that could be supported by all parties. However, Russia’s draft resolution, while drawing on the language of international law, has been widely critiqued for failing to acknowledge its own role in the violations that have been listed. Both the U.S. and the U.K., also permanent members of the Council, have indicated changes to this effect as a requirement for their support, indicating the unlikelihood of its adoption. Russia likely aims to use Council negotiations around humanitarian concerns as a way to gain leverage and control in aid delivery, as Moscow has done for the humanitarian response in Syria. Compounding the tragedy, the Ukraine crisis also impacts food security efforts in other contexts, including Afghanistan, Ethiopia, Syria, and Yemen, due to Ukraine’s role in global wheat markets. UN Secretary-General António Guterres expressed his concern about these domino effects, that “All of this is hitting the poorest the hardest and planting the seeds for political instability and unrest around the globe.”