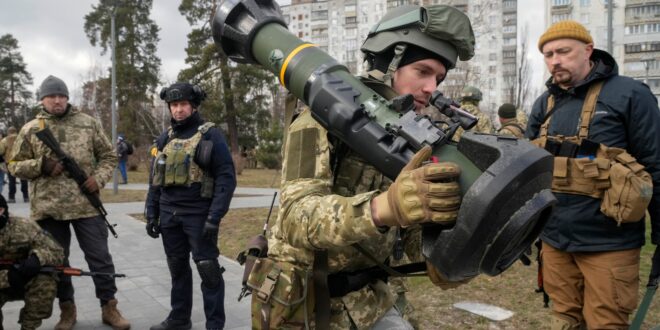 Ukraine continues to frustrate Putin’s hopes for a swift victory

The signs are abundant of how Ukraine frustrated Vladimir Putin’s hopes for a swift victory, and how Russia’s military proved far from ready for the fight.

Russia has lost hundreds of tanks, many left charred or abandoned along the roads, and its death toll is on a pace to outstrip that of the country’s previous military campaigns.

Yet more than three weeks into the war, with Putin’s initial aim of an easy regime change in Ukraine long gone, Russia’s military still has a strong hand. With their greater might and stockpile of city-flattening munitions, Russian forces can fight on for whatever the Russian president may plan next, whether leveraging a negotiated settlement or brute destruction, military analysts warn.

Despite all the determination of Ukraine’s people, all the losses among Russia’s forces, and all the errors of Russia’s leaders, there is no sign that the war will soon be over. Even if he fails to take control of the country, Putin can keep up the punishing attacks on its cities and people.

“His instinct will be always to double down, because he’s got himself into a dreadful mess, a huge strategic blunder,” said Michael Clarke, former head of the British-based Royal United Services Institute, a defense think tank.

“And I don’t think it’s in his character to try to retrieve that, except by carrying on, going forward,” he said.

Putin’s forces in Ukraine are waging Russia’s largest, most complex combined military campaign since taking Berlin in 1945. His initial objective, which he announced in a television address on Feb. 24 as the invasion began, was to “demilitarize” Ukraine and save its people from “neo-Nazis,” a false description of Ukraine’s government, which is led by a Jewish president.

Fatefully, Putin underestimated the national pride and battlefield skills that Ukrainians have built up over the past eight years of battling Russian-backed separatists in the country’s east.

At the start, Russians thought “they would install, you know, some pro-Russian government and call it a day and declare victory,” said Dmitry Gorenburg, a researcher on Russia’s security at the Virginia-based CNA think tank. “That was sort of Plan A, and as near as we can tell, they didn’t really have a Plan B.”

Russia’s first apparent plan — attack key Ukrainian military targets, and make a quick run to Kyiv — failed immediately. It was foiled by Ukraine’s defenses along with the countless mistakes and organizational failures by a Russian force that had been told it was only mobilized for military drills.

Clarke, the British researcher, related accounts of Russian troops selling communication equipment and fuel out of military vehicles to locals during the weeks they waited on Ukraine’s borders.

With no friendly population to welcome them, Russian forces reverted to tactics from their past offensives in Syria and Chechnya — dropping bombs and lobbing missiles into cities and town, sending millions of men, women and children fleeing.

Putin’s forces are in position to capture the besieged port city of Mariupol. Overall, Russians appear to be fighting with three objectives now: to surround Kyiv, to encircle spread-out Ukrainian fighters in the east, and to break through to the major port city of Odessa in the west, said Michael Kofman, an expert on the Russian military and program director at CNA.

Kofman cautions that much of the information on the war is coming from Ukrainians, or their American or other allies. That makes the partial picture skewed, and a full picture impossible.

A senior U.S. defense official on Friday said the Russians have launched more than 1,080 missiles since the start of the war as they remain largely stalled across the country. The official said they retain about 90% of the combat power they had arrayed around Ukraine at the start of the war.

The U.S. assesses that the airspace over Ukraine remains contested, the official said, speaking on condition of anonymity to discuss the military assessments. The Ukrainian air force is continuing to fly aircraft and employ air and missile defense

“Just look at the map, and you just look at how little progress the Russians have been able to make,” Pentagon spokesman John Kirby said recently.

The math of military conquests and occupation may be against Putin in Ukraine.

Estimates of Russian deaths vary widely. Yet even conservative figures are in the low thousands. That’s a much faster pace than in previous Russian offensives, threatening support for the war among ordinary Russians. Russia had 64 deaths in five days of fighting during its 2008 war with Georgia. It lost about 15,000 in Afghanistan over 10 years, and more than 11,000 over years of fighting in Chechnya.

Russia’s number of dead and wounded in Ukraine is nearing the 10% benchmark of diminished combat effectiveness, Gorenburg said. The reported battlefield deaths of four Russian generals — out of an estimated 20 in the fight — signal impaired command, he said.

Researchers tracking only those Russian equipment losses that were photographed or recorded on video say Russia has lost more than 1,500 tanks, trucks, mounted equipment and other heavy gear. Two out of three of those were captured or abandoned, signaling the failings of the Russian troops that let them go.

Meanwhile, Russia needs to limit its use of smart, long-range missiles in case they’re needed in any larger war with NATO, military analysts say.

When it comes to the grinding job of capturing and holding cities, conventional military metrics suggest Russia needs a 5-to-1 advantage in urban fighting, analysts say. Meanwhile, the formula for ruling a restive territory in the face of armed opposition is 20 fighters for every 1,000 people — or 800,000 Russian troops for Ukraine’s more than 40 million people, Clarke notes. That’s almost as many as Russia’s entire active-duty military of 900,000.

On the ground, that means controlling any substantial chunk of Ukrainian territory long-term would take more resources than Russia could foreseeably commit.

Other Russian options remain possible, including a negotiated settlement. Moscow is demanding that Ukraine formally embrace neutrality, thus swearing off any alliance with NATO, and recognize the independence of the separatist regions in the east and Russian sovereignty over Crimea, which Russia annexed in 2014.

Russia’s other options include an unrelenting air campaign in which it bombs and depopulates cities as it did in Chechnya and Syria. U.S. officials also warn of the risk of Russian chemical attacks, and the threat of escalation to nuclear war.

“Unless the Russians intend to be completely genocidal — they could flatten all the major cities, and Ukrainians will will rise up against Russian occupation — there will be just constant guerrilla war” if Russian troops remain, Clarke said.