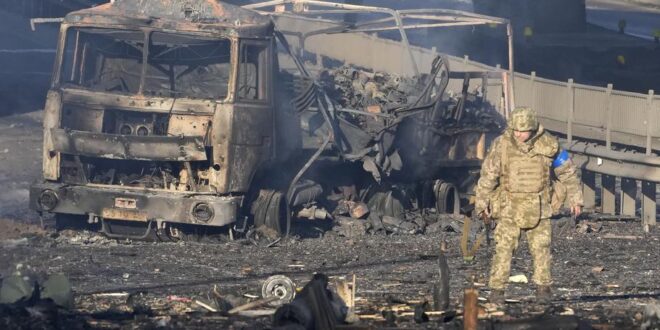 The UN is not aware of any biological weapons programme being conducted in Ukraine, the Organization’s disarmament chief told the Security Council once more on Friday, responding to fresh allegations by the Russian Federation, that it had evidence to the contrary.

Izumi Nakamitsu, High Representative for Disarmament Affairs, spoke at an emergency meeting called by Moscow in the midst of its continuing invasion of neighbouring Ukraine, following that delegation’s circulation of new documents it says back up its claims.

The Council last discussed the issue of alleged biological materials in Ukraine in a meeting on 11 March.

Russian Ambassador Vassily Nebenzia, told the Council that his delegation is in possession of new evidence of a United States-Ukrainian agreement to conduct biological weapons research on Ukrainian territory, dating back as far as 2005.

He has circulated proof of that agreement to the Council, he said, including signed evidence of direct US funding to Ukraine, amounting to $32 million.

While the US continues to assert that the country does not operate in any biological laboratories in Ukraine, “the facts show otherwise”, he said, claiming that Ukrainian authorities in fact gave the US permission to carry out dangerous experiments in return for free travel to international conferences.

Today’s evidence points to studies conducted on Crimean-Congo Fever, leptospirosis and other dangerous pathogens, he said.

He also cited proof of studies into how such illnesses could pass from bats into humans, adding that use of biological weapons could be “easily dressed up as naturally occurring.”

Responding to those allegations, US Ambassador, Linda Thomas-Greenfield, recalled that the Council already heard a “tirade of bizarre conspiracy theories” on biological weapons at its meeting a week ago.

“There are no such labs, not near Russia’s border, not anywhere,” she said.

Instead, Ukraine hosts several public health facilities, proudly supported by the United States, the World Health Organization (WHO) and other Governments and international institutions.

She voiced deep concern that Friday’s meeting could represent a “potential false flag effort in action,” warning of the possibility that Moscow is planning to use chemical or biological agents against Ukrainians.

Describing the new allegations as a sign of desperation, she declared: “This meeting is a result of [Russia’s] isolation on this Council, and on the world stage.”

Reiterating her response to similar allegations raised on 11 March, High Representative Nakamitsu, emphasized that the UN has neither the mandate not the capacity to investigate such claims, which fall under the auspices of 1972 Biological Weapons Convention.

The treaty – to which both Ukraine and the Russian Federation are party – effectively prohibits the development, production, acquisition, transfer, stockpiling and use of biological and toxin weapons.

Against the backdrop of the latest allegations, she outlined several possible courses of action for resolving inter-State conflicts under that Convention, which include the possible convening of a consultative meeting.

“The UN Office for Disarmament Affairs stands ready to support any procedures under the Biological Weapons Convention that States Parties may decide to use,” she said.

Turning to the issue of the safety and security of Ukraine’s nuclear power facilities, the disarmament chief said the International Atomic Energy Agency (IAEA) reported that according to the Ukrainian authorities, all safety systems at the Zaporizhzhya nuclear power plant remained fully functional as of 17 March.

While officials from the Russian Federation’s State nuclear power company were present at the facilities in southern Ukraine, Ukrainian staff continue to operate the plant.

However, Ms. Nakamitsu raised concerns that Ukrainian operators and guards have not been able to rotate for three weeks, and IAEA is still not receiving remote data transmission from its monitoring systems installed at the Chornobyl.