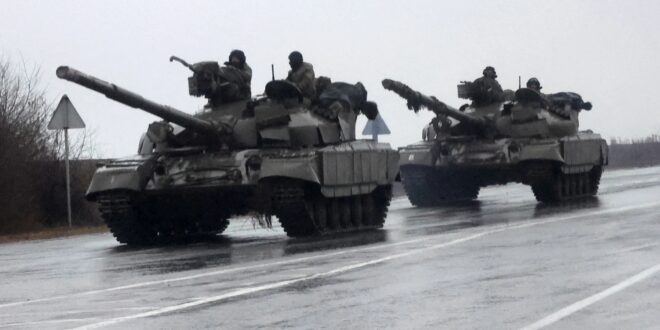 Russia’s war for Ukraine could be headed toward stalemate

Casualties, equipment losses and a lack of progress on the ground are taking an unsustainable toll, experts say

Russia’s attempt to conquer Ukraine could be headed toward a stalemate as heavy casualties and equipment losses take a toll on unprepared Russian forces that have failed so far to achieve any of their initial objectives, Western officials and military experts say.

The front lines have barely moved in more than a week. Russians are being killed or injured at the rate of up to 1,000 a day, according to Western intelligence estimates, and even more according to Ukrainian ones.

The ferocity of the Russian assault has only intensified as the advances have slowed, with Russia substituting harsh bombardments of civilian populations for progress on the battlefield. Regular Ukrainians living in cities surrounded, or partially surrounded, by Russian troops are paying the price for a war effort that began to go wrong in the first hours.

But in the absence of substantive progress on the ground and given the scale of the losses being inflicted on its ranks, Russia’s military campaign could soon become unsustainable, with troops unable to advance because they lack sufficient manpower, supplies and munitions, analysts and officials say.

The next two weeks could be critical in determining the outcome of the entire war, they say. Unless Russia can swiftly improve its supply lines, bring reinforcements and bolster the flagging morale of the troops on the ground, its goals may become impossible to achieve.

An assessment Saturday by the Institute for the Study of War (ISW) went further. “Ukrainian forces have defeated the initial Russian campaign of this war,” it said. The conflict, it said, has now reached “a stalemate.”

Events on the battlefield could yet tilt in a different direction: for example, if the Russians succeed in capturing the besieged and desperate city of Mariupol, freeing up their forces to bolster their offensive elsewhere.

But in a widely shared March 14 article, a retired U.S. general and a European military academic argue that the Russian force is close to reaching what military strategists call the “culminating point” of its offensive, meaning that it will have reached the limits of its capacity to wage the war it set out to prosecute.

“The Russian war of conquest in Ukraine is now entering a critical phase; a race to reach the culminating point of Russia’s offensive capacity and Ukraine’s defensive capacity,” wrote retired Lt. Gen. Ben Hodges and Julian Lindley-French, who chairs the Alphen Group think tank in the Netherlands. They advocate a sustained effort by the United States and its allies to provide military supplies to Ukraine in hopes that Ukrainian forces can take advantage of this “window of opportunity” to win concessions at the negotiating table.

“I believe that Russia does not have the time, manpower or ammunition to sustain what they are doing now,” Hodges, who is now with the Washington-based Center for European Policy Analysis, said in an interview. The assessment assumes, he says, that the West continues to step up military support for Ukraine, thereby enabling Ukrainian forces to sustain the tempo of their resistance.

The Russian military still has overwhelming superiority in terms of numbers and equipment compared with the smaller and more lightly armed Ukrainian military. Russia could yet turn the fight around if it is able to replenish its manpower and supplies, cautioned Lindley-French.

“It would be a big mistake to think that Russia cannot sustain this war,” he said. “They can’t now, but they could fix it” by adjusting tactics and bringing in reinforcements.

However, he added, “Unless the Russians can really improve their game and start rotating [troop] formations into the front line, this particular force is facing a problem.”

U.S. officials decline to make public predictions about the course of the war but say there are clear indications that the Russians are struggling to sustain the existing forces they have and are scrambling to find reinforcements and resolve their logistical difficulties.

Appeals to China for military assistance, a so far fruitless attempt to recruit Syrians and talk of bringing in reinforcements from other parts of Russia and the breakaway territory of South Ossetia in Georgia have not yet produced evidence that fresh troops are on the way, the officials say.

“Just that they’re talking about resupply and re-sourcing tells you they are beginning to get concerned about longevity here,” said a senior U.S. Defense Department official, who spoke on the condition of anonymity to discuss sensitive subjects.

“It’s quite extraordinary, three weeks in, that they are still having these same logistical and sustainment issues, and that they are considering additional ways to overcome these shortages from outside Ukraine,” the official added.

The Russian troops that initially surged into Ukraine from at least four directions had expected to be welcomed as liberators and came unprepared for a long fight, officials and experts say. Instead, the Russians encountered fierce resistance, and now they are strung out along multiple fronts, bogged down in manpower-intensive sieges and without preplanned supply lines to sustain a protracted war, the officials and experts say.

The current map of the battlefield points to the scale of the difficulties, Lee said.

It was clear from the way Russian forces moved in the first hours of the war, he said, that their key objectives were to take Ukraine’s second-largest city of Kharkiv, link up the occupied Donbas region with the port city of Odessa along Ukraine’s southern coast, and — most crucially — capture the capital, Kyiv, with a lightning push from the north.

More than three weeks on, Russian troops still haven’t achieved any of those goals.

They have failed to fully encircle the northeastern city of Kharkiv, even though it lies just a few miles from the Russian border. Their push to take the port city of Odessa has been halted by fierce Ukrainian resistance at the gates of Mykolaiv. Their effort to link the Russian-annexed territory of Crimea has become ensnared by the grinding and increasingly bloody siege of Mariupol.

The Russians have been making gains in the east, in the oblasts of Luhansk and Donetsk, which Russia recognized as independent republics on the eve of the war and which have been partially occupied by Russian-backed forces since 2014. But those advances fall far short of the initial ambitious goal of the invasion.

The Russians’ hopes of encircling Kyiv, let alone capturing it, are starting to recede, Lee said. Russian forces remain stuck about 15 miles outside the city, and though U.S. officials say Russia is moving rear forces toward the front in anticipation of a renewed push on the capital, the front line hasn’t shifted.

Meanwhile, Russians are dying at a rate that is increasingly unsustainable, Lee said. Although Russia still has vast reserves of manpower, it has already committed the bulk of its combat-ready forces, and they are the ones that are almost certainly bearing the brunt of the casualties, he said.

There are no confirmed casualty figures, and Russia has not updated the figure of 498 dead that it announced a week into the war. But of the Russian army’s 168 battalion tactical groups, 120 are already fighting on the ground, making up about 100,000 soldiers out of the total 190,000 sent into Ukraine. That means Russia has already committed 75 percent of its combat-ready force, U.S. officials say.

Western intelligence estimates say it is likely that at least 7,000 Russians have been killed and as many as 20,000 injured, and assuming that the combat forces are bearing the brunt of the casualties, that could mean up to a third of the main combat force is now out of action, Lee said.

“That’s a huge loss, and you can’t readily replace that,” he said. Russia can bring in new conscripts or call up more reservists, but that will dilute the capabilities of the overall force, “and that is not in Russia’s interest,” he said.

Ukrainian forces have been taking casualties, too, though how many isn’t publicly known because they also have not released any numbers. The longer the war drags on, the more perilous their position will become, too, and the greater the chance that Russia will overcome its initial mistakes, said Jack Watling of the London-based Royal United Services Institute.

But, he noted, the Ukrainian forces appear to remain highly motivated, while there are clear signs that morale continues to diminish among the Russian troops, he said. Russian forces continue to surrender, abandon their vehicles and show few signs of initiative in the areas they do control, signs “that this is not a force that is well motivated,” he said.

As Russia’s offensive capabilities slow, the risk is high that civilian casualties will mount. A stalemate is likely to become “very violent and bloody,” the ISW assessment said, because Russian troops are more likely to rely on the bombardment of cities to apply pressure.

There are signs that Russia is running out of precision missiles, U.S. officials say, which means Russian forces will also increasingly resort to the use of “dumb bombs” indiscriminately dropped on civilian areas in an effort to cow them into submission.

Ukraine is unlikely to have the capacity to push Russia out of the territory it has taken so far, officials and analysts say. But the Russians’ current difficulties open up the possibility that the Ukrainians could at least fight them to a standstill, thereby exerting pressure on Russia to accept a negotiated solution.

The main question now has shifted from how long it would take the Russians to conquer Ukraine to “can Ukraine fight Russia to a stalemate?” said a Western official who spoke on the condition of anonymity. “They’re doing pretty well at the moment.”

“The next two weeks are going to be pretty decisive,” Watling said. The war won’t be over in two weeks, he predicted, and all the signals from Moscow suggest the Russians are more likely to double down than climb down, making the war more deadly for Ukrainians even as it moves at a slower pace.

“The odds are stacked heavily in the Russians’ favor. This is their war to lose. The reason they are not achieving their objective is largely about their own incompetence, their lack of coordination,” he said.

“What this really comes down to is whether the Russians are going to get their act together.”