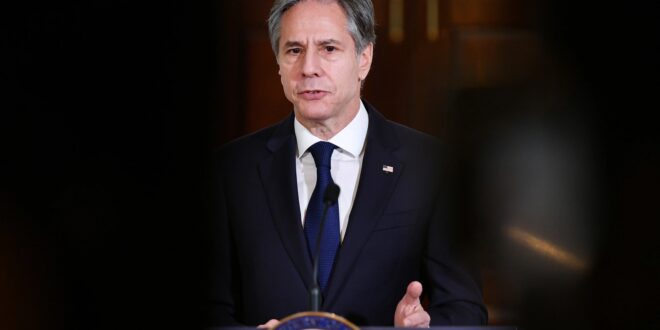 Blinken Says U.S. Has No ‘Strategy of Regime Change in Russia’ after Biden Says Putin ‘Cannot Remain in Power’

U.S. Secretary of State Antony Blinken attempted to walk back President Biden’s comment that Russian President Vladimir Putin “cannot remain in power,” clarifying on Sunday that the U.S. has no strategy of regime change in Russia.

“I think the president, the White House made the point last night that, quite simply, President Putin cannot be empowered to wage war or engage in aggression against Ukraine or anyone else,” Blinken said at a press conference in Jerusalem.

“As you know, and as you’ve heard us say repeatedly, we do not have a strategy of regime change in Russia or anywhere else, for that matter. In this case, as in any case, it’s up to the people of the country in question. It’s up to the Russian people,” he added.

Blinken’s comments come one day after Biden stunned many – including those in his own administration — with his speech on the invasion of Ukraine on Saturday at the Royal Castle in Warsaw, Poland.

“Ukraine will never be a victory for Russia. For free people refuse to live in a world of hopelessness and darkness,” Biden said at the conclusion of the speech. They “have a different future, a brighter future, rooted in democracy and principle, hope and light, of decency and dignity and freedom and possibilities.”

Minutes after the speech, a White House official said Biden was not calling for a regime change in Russia. “The President’s point was Putin cannot be allowed to exercise power over his neighbors or the region. He was not discussing Putin’s power in Russia, or regime change,” the official said.

Senator Jim Risch (R., Idaho) called Biden’s comment a “horrendous gaffe” during an appearance on CNN’s State of the Union on Sunday.

“Please Mr. President, stay on script,” said Risch, the ranking Republican on the Senate Committee on Foreign Relations. He added that rest of the speech was “good.”

Blinken noted Saturday that while the U.S. does not have a strategy of regime change, the administration does have a “strategy to strongly support Ukraine.”

The comments come less than a week after Blinken announced that the U.S. government had made a formal determination that Russian troops have committed war crimes in Ukraine and that the administration would work with others to prosecute offenders.

“Today, I can announce that, based on information currently available, the U.S. government assesses that members of Russia’s forces have committed war crimes in Ukraine,” Blinken said in a statement released on Wednesday.