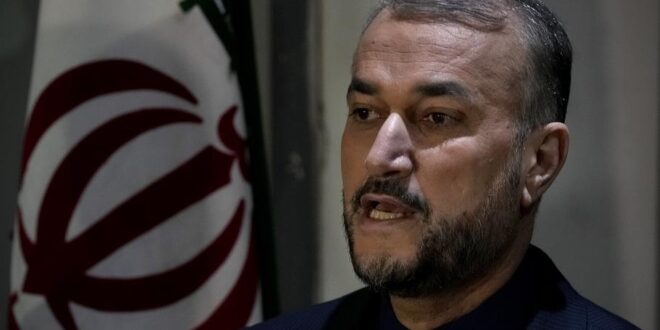 Iran’s top diplomat said Saturday that the country’s paramilitary Revolutionary Guard accepted the idea of continuing to be sanctioned by the U.S. if it meant the restoration of Tehran’s nuclear deal with world powers.

Iranian Foreign Minister Hossein Amirabdollahian’s remark in a state television interview may signal a possible opening over the stalemated Vienna talks. It also appeared timed for a visit Sunday by a European Union diplomat involved in the negotiations.

Sanctions on the Guard have been one of the remaining sticking points over restoring the tattered nuclear deal, outside of Russia’s demand at the 11th hour of guarantees over its trade relationship with Iran amid Moscow’s war on Ukraine. The Guard represents one of the major power bases in the Shiite theocracy and is answerable only to Supreme Leader Ayatollah Ali Khamenei.

In the interview, Amirabdollahian acknowledged that the Guard sanctions were a topic discussed.

He added: “In my opinion, the high-ranking officials of the Islamic Revolutionary Guard Corps are showing and raising their self-sacrifice to the highest level.”

Though later saying that he wouldn’t negotiate on the Guard sanctions, the remark Saturday represents the first time he or any other Iranian official suggested it could be traded away in the negotiations. It came as Spanish diplomat Enrique Mora, who has been the EU’s lead negotiator in the talks, was traveling to Iran for meetings Sunday.

Earlier Saturday in Qatar, EU foreign policy chief Josep Borrell said that all sides were “very close to an agreement” for a roadmap restoring the 2015 nuclear deal, which saw Iran limit its enrichment of uranium in exchange for the lifting of economic sanctions. The deal collapsed in 2018 when then-President Donald Trump unilaterally withdrew America from the accord.

“I hope it will be possible, because now we are discussing about (a) collateral issue which has nothing to do with the core of the nuclear deal,” Borrell said. “The work has been hard and we are reaching an end.”