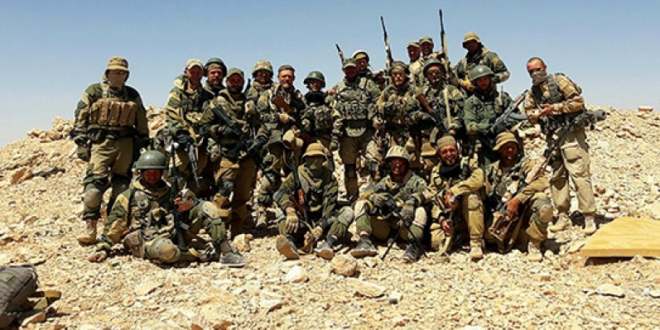 The British government has reported that the Russian mercenary company, the Wagner Group, has been hired by Russia to assassinate Ukrainian President Volodymyr Zelensky following Putin’s stalled invasion of Ukraine. They were first reportedly flown in from Africa to Donetsk during the onset of the invasion. However, it seems that armed reinforcements had arrived just this week, according to reports.

This announcement comes with the British government’s sanctions against the Wagner group following the West’s massive additions to the economic sanctions to around 400 Russian individuals and entities, including the Russian Duma and 40 defense companies, in an attempt to further cripple its economy.

It can be remembered that the Russians had targeted Zelensky during the onset of the invasion, where Chechen special forces were released into Ukraine to hunt down Zelensky, his family, and their two children. The Chechen forces were allegedly given a kill list comprised of top government officials they needed to take out so that the invasion would go relatively smoother, taking out all Ukrainian government officials so nobody could lead the Armed Forces of Ukraine. Furthermore, the alleged plan was to take out Zelensky and replace him with a pro-Russian leader.

A month into the conflict, there had been a report of a Ukrainian Mayor being killed by the Russians. Mayor of Gostomel Yuri Illich Prylypko was shot dead while he was distributing aid to his people. Another Ukrainian official, Mayor Volodymyr Struk, the pro-Russian mayor of the Kreminna, was also shot dead after being kidnapped from his home. However, it is unlikely that he would have been killed by Russian forces as Adviser to the Ukrainian Ministry of Internal Affairs Anton Gerashchenko described him as a “traitor.”

There were also several reports of mayors being kidnapped. Such was the case of Melitopol Mayor Ivan Fedorov, who was kidnapped by “armed men” but was subsequently freed in exchange for nine captive young Russian soldiers.

The Ukrainian government also reported that Zelensky had experienced assassination attempts. However, none of the said attempts were successful as Zelensky was held in a secret location within Kyiv.

Furthermore, the Ukrainian Forces had successfully killed and destroyed a Chechen special forces column composed of around 56 tanks located in Hostomel within the vicinity of Kyiv. The Kadyrovites suffered a huge loss from this ambush as their top general Magomed Tushayev, head of the 141 Motorized Regiment of Chechnya, had also been killed in the encounter.

It is perhaps the loss of the Chechen forces that Russia decided to employ the help of the Wagner Group. They had reportedly sent an unknown number of armed militants just this week, with the Main Intelligence Directorate of the Ministry of Defense of Ukraine stating that they were also out for the heads of the top military and political leaders of Ukraine.

According to them, this version of the hit list included Ukrainian Prime Minister Denys Shmyhal and Ukrainian film producer Andriy Yermak who also serves as Zelensky’s lawyer and his chief advisor.

“Putin personally ordered another attack by one of the few proxies. All previous attempts have ended in the failure and elimination of terrorists,” the Ukrainian intelligence agency said.

They also stated that the Russians have so far failed to achieve any of their invasion goals and are trying “to destabilize the Ukrainian government, demoralize society, disrupt the resistance movement, and slow down Ukraine’s international cooperation.”

Who Are the Wagner Group and How Are They Linked to Russia?

The Wagner group is a known Russian mercenary organization (which poses itself as a private military company) that is believed to be owned and funded by Russian businessman Yevgeny Prigozhin (he denies any connection to the group). Prigozhin, on the other hand, enjoys close ties with Russian President Vladimir Putin. According to intelligence, Prigozhin is the man behind Russia’s troll farms. The group actually doesn’t officially exist on paper, but it is very much active as a group as they are believed to have fought in several conflicts.

It is believed that the group has deep ties with the Russian Ministry of Defense and is a proxy force for the Russians. Being considered “hired” soldiers allow them to operate in other countries without incurring repercussions from the international community as they are technically not functioning under the Russian flag.

This means that Russia could exert military influence without publicly admitting that they were involved in such conflicts. Furthermore, they would be saved from embarrassment if ever they were to lose a conflict as the mercenaries are not part of the Russian Armed Forces.

It is known that the Wagner Group was functional during the Russian interventions in Syria, Libya, Sudan, and of course, during the annexation of Crimea and 2014 operations in Donbas, helping the Ukrainian separatist forces with their “independence.” Note that the Wagner Group is different from the “Little Green Men,” who also operated during the Russo-Ukrainian War in 2014. These men were rumored to be active Russian soldiers that were part of the Spetsnaz and the paratroopers of the 45th Guards Spetsnaz Brigade of the VDV.

The group itself was named after Richard Wagner, who was Adolf Hitler’s favorite composer. This isn’t shocking as the founder of the group Dmitry Utkin, former Russian GRU Special Forces Officer, is reportedly linked with the Russian right. He is also very well-known for his multiple Nazi tattoos.

Executive Director of Tech Against Terrorism Adam Hadley stated that they were able to determine that most of the Russian-backed forces in Ukraine were “almost certainly connected with extreme far-right organizations.” He said that this was ironic as Putin himself wanted to denazify Ukraine, a claim that most journalists and politicians have debunked.

It seems that the group has not been successful with its campaign to assassinate Zelensky and other political figures in Ukraine. With the Russian forces seemingly taking a more defensive stance due to taking huge losses in the month-old war, the status of the hired mercenaries is also left in limbo.

In Syria, Wagner mercenaries went up against U.S. forces on February 7th into the early hours of February 8th, when several hundred of them in company with Assad’s Syrian army tried to capture an oil refinery near the city of Dief Ezzor. In what became known as the Battle of Khasham, US Special Forces embedded with Kurdish-led Syrian Democratic Forces troops rained bombs, artillery, and close air support by Apache helicopters on their attackers. It was a massacre that may have killed as many as 300 members of Wagner in a few hours.