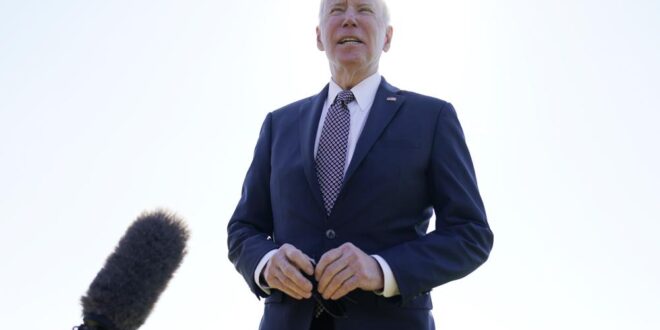 President Joe Biden on Monday called for Vladimir Putin to be tried for war crimes and said he’ll seek more sanctions against Russia after what he described as “outrageous” atrocities around Kyiv. One of the president’s top advisers said the Russians had exacted a horrible toll before making a “pell-mell” retreat from around Ukraine’s capital to regroup for dangerous forays elsewhere.

“We have to gather all the detail” for a war crimes trial, Biden said, referencing one of the towns surrounding Kyiv where Ukrainian officials say the bodies of civilians have been found. “This guy is brutal, and what’s happening in Bucha is outrageous and everyone’s seen it.”

Biden’s national security adviser, Jake Sullivan, later reminded reporters that the U.S. had unveiled intelligence in the lead-up to the Feb. 24 invasion warning that Russia would seek to imprison or kill dissidents and others it viewed as threats to its attempted occupation of Ukraine. The grim scenes that unfolded around the capital city show that the concern is now coming to pass, he said.

“We do not believe that this is just a random accident, or the rogue act of a particular individual,” Sullivan said of the images of bound civilians who had been killed. “We believe that this was part of the plan.”

Biden made the war crimes allegations to reporters after Ukraine President Volodymyr Zelenskyy visited Bucha, where Ukrainian officials say the bodies of civilians have been found in macabre scenes of brutality. Zelenskyy labeled the Russian actions “genocide” and called for the West to apply tougher sanctions against Russia.

Biden and U.S. officials, however, stopped short of calling the actions genocide.

“We have seen atrocities, we have seen war crimes, we have not yet seen a level of systematic deprivation of life of the Ukrainian people to rise to the level of genocide,” Sullivan said.

The bodies of 410 civilians have been removed from Kyiv-area towns that were recently retaken from Russian forces, according to Ukraine’s prosecutor-general, Iryna Venediktova. Associated Press journalists saw the bodies of at least 21 people in various spots around Bucha, northwest of the capital.

Sullivan warned that the world “should brace” for additional potential war crime revelations.

Sullivan said “the Russians have now realized that the West will not break” in its support of the Ukrainian government. But he warned that Russia was redoubling its offensive in other parts of the country after pulling many troops from around Kyiv.

White House officials said talks about ramping up new sanctions against Russia intensified after reports of the alleged atrocities emerged. Biden said Monday that he would continue to add sanctions but did not detail what sectors the U.S. may target next. Sullivan said the additional sanctions would come this week.

After unveiling an avalanche of sanctions in the first weeks of the war, administration officials in recent days have put more focus on closing loopholes that Russia might try to use to avoid sanctions.

Biden noted that he had faced pushback last month when he described Putin as a war criminal for the unfolding onslaught in Ukraine after hospitals and maternity wards were bombed. In his remarks on Monday, Biden suggested it was clear that assessment had been validated.

Investigations into Putin’s actions had begun before the newest allegations of atrocities.

The U.S. and more than 40 other countries are working together to investigate possible violations and abuses, after the passage of a resolution by the United Nations Human Rights Council to establish a commission of inquiry. There is another probe by the International Criminal Court, an independent body based in the Netherlands. The U.S. Senate unanimously approved a resolution last month seeking investigations of Putin and elements of his government for war crimes over the invasion of Ukraine.

Biden’s chief envoy to the United Nations, Ambassador Linda Thomas-Greenfield, announced Monday that the U.S. plans to seek a suspension of Russia from its seat on the U.N.’s top human rights body after the latest revelations. That would require a decision by the U.N. General Assembly.

Russia and the other four permanent members of the U.N. Security Council — Britain, China, France and the United States — all currently have seats on the 47-member-state rights council, which is based in Geneva. The United States rejoined the council this year.

“My message to those 140 countries who have courageously stood together is simple: The images out of Bucha and devastation across Ukraine require us now to match our words with action,” Thomas-Greenfield said. “We cannot let a Member State that is subverting every principle we hold dear to continue to sit on the U.N. Human Rights Council.”