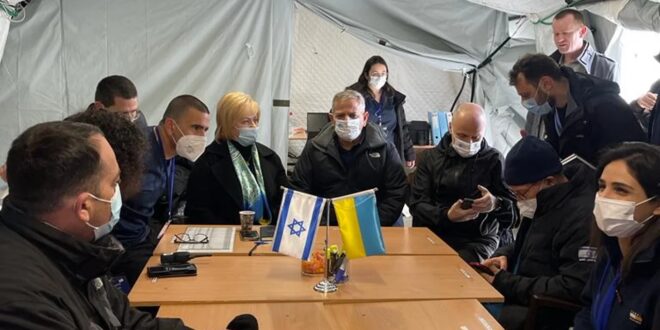 Israeli Health Minister Nitzan Horowitz blasted Russia over “the war crimes it is committing in Ukraine,” as he visited a field hospital set up by Israel in the war-torn country.

It was the first visit by an Israeli minister to Ukraine since Russia invaded the country on February 24.

Horowitz said his visit symbolized Israel’s “solidarity with Ukraine, against a vicious Ukrainian invasion, against the acts of slaughter and war crimes that are now being revealed around the country.”

The health minister met with members of the Israeli humanitarian delegation in Ukraine at the field hospital, as well as with Ukraine’s deputy health minister and the chairman of the Ukrainian parliament’s health committee.

According to Horowitz, over 2,000 women and children have been treated at the field hospital, and “Israel is the only country that has created such a facility inside Ukrainian territory.””It’s very hard to watch the images from the massacre in Bucha,” Horowitz tweeted earlier, referring to the mass grave revealed after Russian troops retreated from the Kyiv region.

“But we can’t look away from that, nor from the war crimes committed by Russia. Crimes against humanity, against human rights and against democracy.

“I visit today the field hospital Israel set up in Ukraine to make one thing clear: Ukraine you’re not alone,” Horowitz said.

During the visit, which was coordinated with Prime Minister Naftali Bennett and Foreign Minister Yair Lapid over the past two weeks, Horowitz is also expected to meet with his Ukrainian counterpart.

Kochav Meir field hospital was inaugurated two weeks ago in the western Ukrainian city of Mostyska, on the Polish border, by Sheba Medical Center and Israel’s health and foreign ministries. It is run by more than 60 doctors and nurses from across Israel, and can care for up to 150 patients at a time.

The project costs 21 million shekels ($6.5 million), and is funded by the foreign and health ministries, the Schusterman Family Foundation and the Joint Organization.

On Sunday, Lapid also condemned the killings in Bucha.

“It is impossible to remain indifferent in the face of the horrific images from the city of Bucha near Kyiv, from after the Russian army left,” Lapid tweeted. “Intentionally harming a civilian population is a war crime and I strongly condemn it.”

Israel’s ambassador to Ukraine also denounced the killings as a “war crime”, in a break from the more restrained rhetoric exhibited by Israeli officials.

Taras Shapravskyi, deputy mayor of Bucha, a town around 40 km (25 miles) northwest of Kyiv city, said 50 of some 300 bodies found after the Kremlin’s forces withdrew late last week were the victims of extra-judicial killings carried out by Russian troops.

The atrocities were also set to overshadow peace talks between Russia and Ukraine due to restart by video link on Monday.