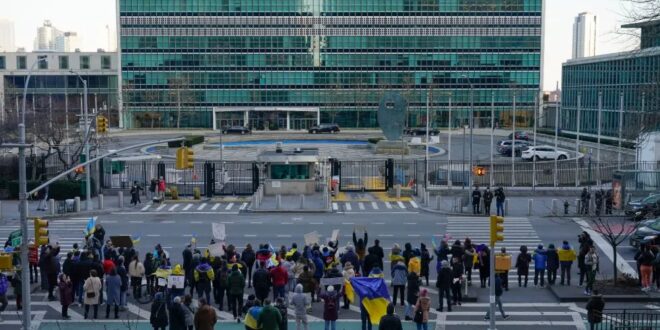 Russia’s war in Ukraine means the end of counterterrorism consensus

For the past two decades at the United Nations, counterterrorism has been one of the few international security issues on which the West and Russia could work together. That is, until Russian President Vladimir Putin’s invasion of Ukraine dealt a hammer blow to the rules-based international system that grew out of the ashes of World War II. Policymakers and analysts largely have focused on implications for and responses of multilateral institutions to the ongoing incursion that has killed thousands and displaced millions.

The European Union (EU) and NATO are doubling down on their support for Ukraine by applying unprecedented sanctions and other measures against Moscow; the Council of Europe, the Organization for Economic Co-operation and Development (OECD), International Monetary Fund (IMF), and other organizations have expelled or suspended Russia; and Secretary-General António Guterres and the wider U.N. membership are grappling with how to respond when one of the P5 blatantly violates the U.N. Charter and international law. The United States is now seeking to have Russia suspended from the U.N. Human Rights Council. Some have wondered whether the United Nations can ever bounce back.

With Russian troops on the cusp of an invasion, Kenya’s ambassador to the United Nations warned that multilateralism was on its “deathbed.” The extent of the ramifications for the existing multilateral system, while still unclear, will be significant. This is particularly obvious when it comes to addressing threats and challenges where the U.N. Security Council, with Russia as a permanent member, traditionally has played a central role. Yet, from the crisis could come an opportunity to consider fresh approaches to addressing global challenges. This reset can eschew traditional, outdated and, in some cases, counterproductive approaches in favor of ones that are more tailored to the current geopolitical realities.

Perhaps nowhere is a fresh approach needed more so than in counterterrorism, an issue that assumed an outsized role on the council’s agenda since it forcefully responded to the 9/11 attacks. Since then, it has adopted more than 40 resolutions requiring countries to take a series of legal, regulatory and operational measures. It created an unprecedented council architecture to catalyze implementation of these measures around the globe, while putting few guardrails in place to prevent government abuse of them.

Among the reasons for this steady growth are the fact that, as tensions among the P5 increased over the past 20 years, counterterrorism became one of the few issues where they could find consensus. Recognizing this, several elected council members with less-than-stellar domestic counterterrorism records have prioritized counterterrorism during their presidency of the council. This, along with the emergence of ISIS as a global phenomenon in 2014, led to the proliferation of resolutions that further extended the council’s counterterrorism framework.

Yet, this framework is primarily based on a model developed and applied through a narrow state-centric security lens that largely pays lip service to human rights and the need for gender-sensitive and “whole of society” preventative approaches that address the grievances that can give rise to terrorism. And it is this model that the council continues to prod countries and regional organizations to implement. Moreover, the council has been unwilling to join senior U.N. human rights officials in calling out countries that have used the framework to “bluewash” their use of counterterrorism laws to target political opponents or human rights defenders.

The limitations in the council’s approach should not come as a surprise. Russia’s views on counterterrorism, human rights and civil society — which China shares — are well-known and entrenched. This result is the price that the P3 (the United States, United Kingdom and France) and other democratic states have paid for repeatedly, turning to the council for counterterrorism action and being willing to compromise in the name of preserving consensus.

Among the consequences — with countries taking advantage of a council counterterrorism regime that leaves it to each country to determine who is or is not a “terrorist” — has been what the U.N. Special Rapporteur on the Protection and Promotion of Human Rights and Fundamental Freedoms while Countering Terrorism described as “the systemic domestic exploitation of counterterrorism frameworks that emerged in the aftermath of 9/11 to repress and violate rights domestically,” with some governments pointing to Security Council Resolution 1373 as justification. Putin’s treatment of Alexei Navalny and China’s spurious use of “counterterrorism” to justify its imprisonment of Uyghurs in Xinjiang are disturbing examples of this practice.

In 2021, Norway became the latest democratic government to draw attention to this bad practice, saying it was “deeply concerned about the growing misuse of counterterrorism measures to silence human rights defenders, political opponents, and religious or ethnic minorities.” While there is ample evidence to support Norway’s concern, Russia’s intervention summed up its disregard when it cautioned that “the council pays too much attention to the human rights aspects of counterterrorism, to the detriment of ensuring security.” And, although many countries share the concerns Norway expressed, Russia’s view is more reflected in the council’s counterterrorism framework and engagements.

Despite these starkly different approaches, the council’s counterterrorism consensus survived the Russian invasion of Georgia and Crimea, and Moscow’s support for Bashar al-Assad’s regime in Syria. But at what price?

In the wake of the Ukraine war, and taking advantage of a multilateral counterterrorism architecture that offers opportunities to work outside the Security Council, it would better serve the security interests of the United States and its allies — and be more consistent with their values — if they pursued a more principled vision that aims to prevent and counter terorism by developing right-sized approaches that rely more on regional organizations, ad hoc multilateral coalitions, and local actors who are better positioned to deal with localized terrorist threats.

The strictures of maintaining a balance of power and traditional counterterrorism consensus in the Security Council have played into Moscow’s hands for two decades. The Global Coalition to Defeat ISIS was efficient without Moscow’s involvement. Given the current geopolitical environment, the path to more effective, principled multilateral counterterrorism also should steer clear of Russia.