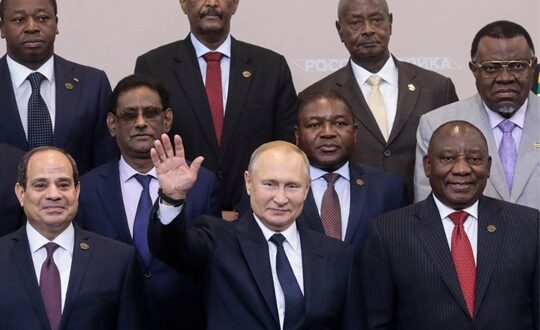 Over the past several years, international policymakers, primarily in the West, as well as journalists and commentators have frequently called attention to Russia’s renewed interest in expanding its footprint in Africa. These discussions of “Russia’s return” to Africa are usually couched in a fearmongering, manichean framework of competition, ostensibly within what are regarded as Western spheres of influence in Africa. They also frequently feature calls for Western policymakers to “counter” Russia’s activities in Africa, bolstered with references to the malevolent ways Russia exerts influence among governments and publics on the continent, including—but by no means limited to—disinformation campaigns, arms sales, diplomatic support for autocratic regimes and the use of private military companies in the security arena.

In recent times, West Africa has become something of a poster child for these alarmist narratives, amid a renewed round of debates about the relationship between nations in the region and France, the former colonial ruler of most of them. With France and Russia said to be engaged in a geopolitical contest for influence in Mali, in particular, many commentators blame everything from popular support for the country’s transitional military regime to widespread public opposition to France and its policies in the Sahel on Russian disinformation intended to expand Moscow’s influence there and elsewhere across Africa.

Post Views: 85
Previous Afghanistan Will Put Russia’s Regional Ambitions to the Test
Next To Change Putin’s Behavior, the West Needs a New Strategy