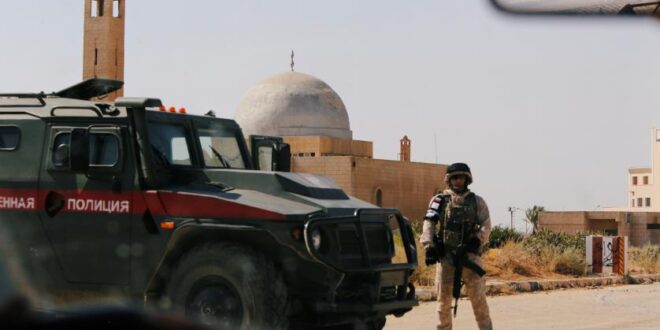 The Russian army has expanded its military operations in the Syrian desert region since early April, following the decline of its operations in March and late February, the Syrian Observatory for Human Rights (SOHR).

The Observatory indicated that the Russian fighter jets launched 240 air raids on the Syrian desert since early April.

It stated that Russian fighter jets launched over 55 airstrikes over the past 36 hours, targeting ISIS hideouts and caves in the al-Sokhnah desert in Homs’s eastern countryside, al-Rusafa desert Al-Raqqah, and another area in Aleppo-Hama-Al-Raqqah triangle, amid confirmed reports on human and material losses.

The security services arrested the commander of the National Defense in al-Sokhnah town for communicating with ISIS cells earlier.

SOHR monitored a security alert among regime forces and Iranian militias in Palmyra, anticipating sudden attacks by ISIS cells on military positions in the area.

ISIS terrorists increased their attacks against the regime forces and Iranian militias, injuring and killing dozens, following a drop in Russian airstrikes in March.

The opposition’s “Flight Observatories” reported that Russian forces launched hundreds of warplanes from Hmeimim airbase towards the Syrian airspace between Homs eastern countryside and Raqqa to the Deir Ez-Zor desert.

The Observatories reported that over 200 air raids were carried out with high-explosive missiles, targeting ISIS hideouts over the al-Sukhna area.

Earlier this week, unknown armed men launched a guided missile against a military site of the Iraqi Hezbollah militia, killing four of its members. They bodies were later transferred to the Deir Ez-Zor Hospital, which is secured by military units affiliated with the Fourth Division, led by Maher al-Assad.

Meanwhile, Iran sent anti-aircraft missiles to the eastern countryside of Homs, accompanied by new military reinforcements that reached the “Moheen” military warehouses and other sites east of Homs, according to Syrian activists.

An opposition observatory official stated that over the past few days, Iran sent anti-aircraft missiles from the Abu Kamal area in Deir Ez-Zor to Homs countryside, accompanied by sending new weapons and ammunition in ambulances as camouflage.

Since this year, about 133 members, including officers, have been killed in various attacks.

The regime executed several combing campaigns to pursue ISIS remnants in the Syrian desert, which did not yield results.

The terrorist organization uses a new military tactic that relies on the element of surprise and sudden operations against military bases and convoys of the regime and Iran in the Syrian desert.

Post Views: 116
Previous The Outsiders
Next Neo-Nazi who tried to launch a ‘civil race war’ by launching attacks with 600 homemade bombs and guns to ‘preserve the white population’ is hit with terror charge in Germany