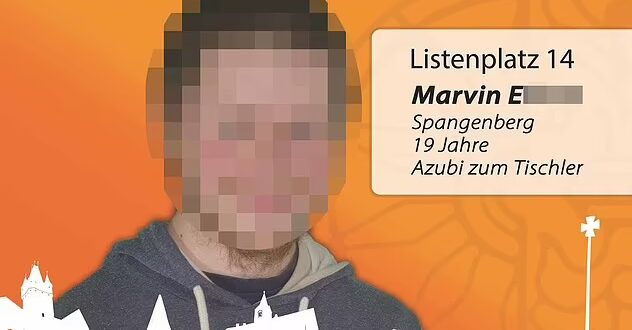 Marvin E., 20, faces charges of attempting to form terrorist organisation as well as preparation of a grievous seditious attack and various weapons law violations
Marvin E., from Spangenberg, intended to launch a ‘race war’ over three years
Investigators found 600 homemade bombs at his apartment and a manifesto

German federal prosecutors today said they had charged a suspected neo-Nazi with attempting to set off a ‘civil race war’ in Germany with planned attacks using 600 homemade explosives and guns to ‘preserve the white population’.

A week after authorities swooped on alleged far-right militant cells in raids across Germany, the federal prosecutor’s office named the suspect only as Marvin E. and said he had been in detention since September 2021.

Marvin E., 20, from Spangenberg in northern Hesse, faces charges of attempting to form a terrorist organisation, as well as preparation of a grievous seditious attack and various weapons law violations.

Prosecutors said in a statement that Marvin E., ‘shares the ideology’ of Atomwaffen Division (Atomic Weapons Division, AWD), an international neo-Nazi terrorist network founded in 2015 in the United States.

Marvin E. intended from the summer of 2021 to launch ‘a civil race war’ over the next three years ‘to preserve the white population’, they said.

Investigators found 600 homemade explosive devices when they searched his apartment in September last year, as well as a far-right manifesto in which Marvin E. called for the ‘race war’, reports local news site Hessenschau.

He is believed to have researched the acquisition of firearms and built ‘unconventional’ bombs with components bought online, while seeking to start his own local chapter of AWD and recruit members.

AWD is believed to espouse ‘racist, anti-Semitic and National Socialist views’ and plot attacks against Jews, Muslims and other purported enemies with an aim of destabilising Western democratic states.

The suspect also ran as a free candidate for the CDU party in the Spangenberg city council local elections in 2021. Once the allegations against him came to light, the party ‘dissociated itself and emphasized that he was not a party member’, local media reported.

In what Der Spiegel magazine called ‘the biggest blow against the militant neo-Nazi scene in the recent past’, the federal prosecutor’s office said more than 1,000 officers raided the homes of 50 suspects in 11 states.

Germany’s centre-left-led government under Chancellor Olaf Scholz took office in December pledging a decisive fight against far-right militants after criticism that the previous administration had been lax on neo-Nazi violence.

Interior Minister Nancy Faeser said when she was appointed that her top priority would be tackling the country’s ‘biggest threat: right-wing extremism’ after a series of deadly far-right attacks.