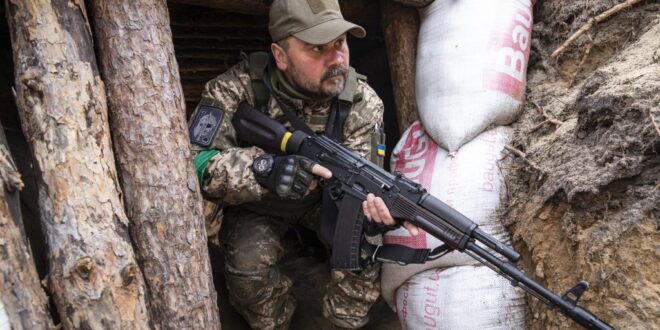 Russia Crisis Military Assessment: How Ukraine can take the fight to Russia

On March 25, Russia was forced to announce a major shift in strategy due to unsustainable losses in northern Ukraine. Since then, it has removed many of its forces from the area—including all those surrounding Kyiv—to Belarus and Russia to refit and reequip. We assess that Russian operations are now centered on the consolidation of gains in the eastern Donbas region and the completion of a land bridge from there to Crimea, which would give Russian diplomats a stronger hand in peace negotiations. If Russian forces gain complete control of the Donbas, not just separatist-held portions, they are in a better position to demand autonomy for the entire region—which then would become a protectorate of the Union State of Russia and Belarus. Controlling the Donbas would also provide Russian President Vladimir Putin ground to claim that his “special military operation” was a success, protecting ethnic Russians in the region and expanding their living space.

We have determined two immediate focus areas of the Russian offensive. First, the Kremlin wants to take control of (or annihilate) Mariupol, effectively ending Ukrainian opposition to a land bridge connecting Crimea to the Donbas. Second, the Russians are likely to conduct an offensive against the city of Izyum, which lies south of Kharkiv and just north of the Donbas. In response to Russia’s strategic shift, the Ukrainian effort has adapted, becoming more offensive with counterattacks and smaller-scale harassment of withdrawing Russian forces. As Ukraine prepares for a larger fight against Russian forces in the east, its military is in urgent need of weapons that will support an offensive to dislodge Russian forces from Donetsk and Luhansk.

Thousands of front-line troops have departed Ukraine for Belarus and southern Russia, where they are likely reorganizing, reequipping, and preparing for the Donbas campaign. Some have begun their move toward the region, and another long convoy of Russian armor has developed—this time repositioning forces from the Kharkiv area to Izyum.

Battle for Izyum. A town of approximately forty thousand people in Kharkiv Oblast, Izyum’s location between Kharkiv and the Donbas makes it strategically vital as a location to stage and supply the fight. In late March, Russia consolidated control of the town after an extended and brutal battle. Currently, Russian and Ukrainian forces are fighting in rural areas around it, and a major engagement for control of the town (and the lines of communication running through it) seems likely in the next two weeks. On April 3, video and photographs emerged of a Russian Su-35S fighter jet crashing near Izyum, marking the most advanced aircraft the Russians have ever lost in combat. Aside from the real impact of losing a Su-35S, the location of the loss indicates that the fight for air superiority is shifting to the Donbas.

Battle of attrition in the Donbas. Ukraine was very successful in the defensive battles of Kyiv and Kharkiv, blunting Russian advances outside of those major cities, attacking logistics supply and reinforcement convoys, and using ground and air fires to destroy Russian equipment and personnel, thereby forcing a withdrawal. But many of the advantages Ukraine harnessed in the battle for northern cities will not be available to them in the Donbas. Not only will Ukrainian forces need to blunt Russian advances, but they will need to dislodge Russian forces from their entrenched positions. We believe this type of battle would lead to a bloody war of attrition, with the line of control moving incrementally.

Nationwide air and missile strikes. Despite the focus on the east, Russia will continue air and missile strikes across the country to prevent Ukrainian air defenses from focusing solely on the Donbas, inflict physical damage throughout the country, and broadcast a threat to the United States and its European allies and partners not to expand their intervention in the conflict.