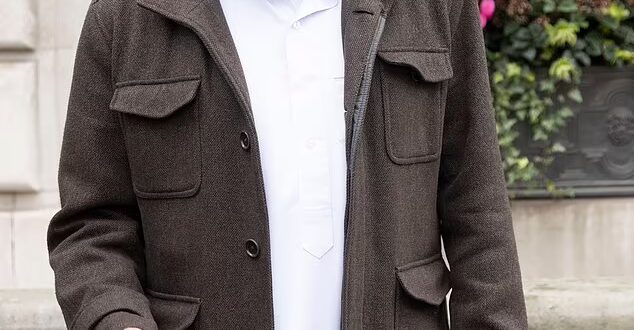 Ali Harbi Ali, 26, was handed a rare whole life tariff after being convicted of murder and preparing terrorist acts on Monday by jurors who spent just 18 minutes deliberating.

The Islamic State fanatic carried out his attack at the backbench Conservative MP’s constituency surgery in Leigh-on-Sea, Essex, on October 15 last year.

After his arrest, searches of his mobile phone and laptop devices found images of terrorist attackers and ‘inspirational’ IS propaganda.

According to The Sun, Choudary wrote in a blog on a website hosted by the US firm GoDaddy: ‘Who radicalised him?

‘It is now evident from his clear testimony it was the British foreign policy in Syria and Iraq.’

He added that the British media would ‘paint Ali as a monster’.

It was his first public protest since the 55-year-old’s public speaking ban was lifted last year.

Choudary, the former leader of the banned Islamist group Al-Muhajiroun, was jailed for five-and-half years in 2016 for inviting support for the Islamic State. He served less than half that term and was out in 2018.

The extremist is known for his shocking hate speech on topics from 9/11 to the Charlie Hebdo attacks and his wish for Buckingham Palace to be turned into a mosque.
Choudary’s appalling words of hate

On the Lee Rigby killer Michael Adebolajo – ‘He is a practising Muslim, a family man and I’m very proud of him’

On September 11 and 7/7 attacks – ‘I didn’t condone the September 11 and July 7 bombings, what I did is say that they had juristic justification. There are people that justify [them] on the divine text.’

On the Charlie Hebdo shootings – ‘I think that this magazine went out of their way to insult the Prophet and they put their very nasty cartoons on their front pages in the past. It obviously angers many Muslims.

‘I think it’s completely ridiculous, the idea that I should say I don’t condone the attack.’

He also called Mr Cameron, Mr Obama and the leaders of Pakistan and Egypt the ‘shaitan’, or devil, and said he wanted them to be killed.

On his plans for Britain – ‘We initiate the jihad against the kuffar [disbelievers] to make the name of Allah in the highest.

‘Next time when your child is at school and the teacher asks, ‘What is your ambition?’, they should say, ‘To dominate the whole world by Islam, including Britain, that is my ambition”.

When ISIS executioner Jihadi John was beheading hostages and posting the videos online, Choudary quoted a saying of the Prophet – ‘Whoever comes to dispute with him, strike his neck.’

On the monarchy – ‘I once gave a talk and I said Queen Elizabeth used to have one bath a year. I gave this talk in a church and there was a woman there at the front, an elderly lady, and she kind of shrieked at me. She said: ‘that’s a lie, she had two baths a year.’

The night before his conviction in 2016

Choudary told Sky News he was merely exercising his right to freedom of speech: ‘If you cannot say when you believe in something and you cannot share that view, then you don’t really have freedom to express yourself in this country.’

Choudary described ISIS leader Abu Bakr al-Baghdadi as ‘the Caliph of all Muslims and the Prince of the Believers,’ adding: ‘I think in many respects it’s the kind of society I’d love to live in with my family.’

Choudary urged the Taliban to impose a stricter form of Islamic justice including stoning adulterers, chopping off the hands of thieves and lashing anyone caught drinking alcohol.

Choudary also said he wanted to ban music and mixing between sexes and said non-Muslims should pay an ‘infidel tax’.

Post Views: 43
Previous Ukraine and the Profits of War
Next Islamic State calls on supporters in Israel to launch more terror attacks