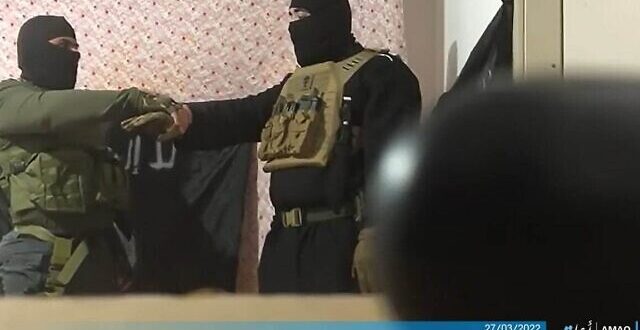 In Ramadan speech, spokesman for jihadist group criticizes ‘secular terrorists’ of Fatah and Palestinian Islamic Jihad, says Jerusalem can only be liberated by return of caliphate

Islamic State on Sunday urged its supporters in Israel to launch additional terror attacks, the first such call since two deadly terror attacks were carried out last month by Arab Israelis thought to have been inspired by the jihadist group.

Islamic State claimed responsibility for both attacks, though it did not appear the terrorists had been instructed by it to commit them.

In a long address for the holy month of Ramadan, the jihadist group’s new spokesperson Abu-Omar al-Muhajjir called for a new “global offensive” in retaliation for the death of its leader, Abu Ibrahim al-Qurayshi, last February.

Al-Qurayshi died when he detonated a bomb to avoid capture during a US raid in northwest Syria, the White House and US defense officials said.

“Fight them all and Allah will answer and punish them at your hands,” al-Muhajjir said, referring to “heathen states.”

The Ramadan address came as Israel has moved to crack down on Islamic State, after six Israelis were killed in a pair of terror attacks in Beersheba and Hadera by Arab Israeli supporters of the jihadist group.

Last week, meanwhile, Israeli authorities announced the arrest of an Islamic state-linked Palestinian in connection to three murders, including of an elderly Jerusalem couple in their home in 2019.

Al-Muhajjir commented on last month’s two terror attacks in Israel, calling on the group’s supporters to “arm themselves with weapons and carry out further attacks.”

At the same time, he argued that Jerusalem could be liberated from the Jews only through the return of the caliphate — and not through a Palestinian uprising or with the help of “those who have values that change according to the interests of their Roman masters (the West).”

Al-Muhajjir hailed the Arab Israeli attackers as “those who fought and were killed for the sake of Allah and religion,” and criticized the “secular terrorists” of Fatah and Palestinian Islamic Jihad, who are fighting for the land and the homeland.

He also called on all Muslims in the Arab world to oppose all leaders who have relations with Israel and want to make peace with it.

“Modern Muslim politicians trying to liberate Jerusalem are nothing more than puppets in the hands of Israel and the West,” he said.

Al-Muhajjir also called on supporters to resume attacks in Europe, taking advantage of the “available opportunity” of “the crusaders fighting each other” — in reference to Russia’s invasion of Ukraine.