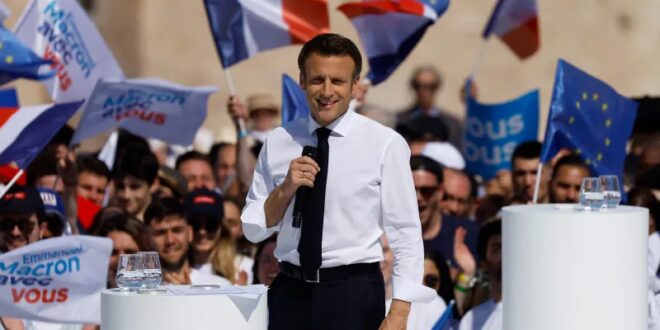 France’s Election Shouldn’t Have Been This Close

How Macron Lost the Left

Not so long ago, the war in Ukraine appeared to have made French President Emmanuel Macron a shoo-in for a second term. Polls showed that a majority of French voters trusted him to handle the crisis, and two weeks after Russian President Vladimir Putin invaded Ukraine, Macron garnered support from 31 percent of voters surveyed compared with just 18 percent for Marine Le Pen, the far-right candidate who was in second place. The last time a French candidate enjoyed such a big lead in the run-up to a presidential election was more than three decades ago.

What a difference a few weeks makes. Macron did win the most votes in the election’s first round, on April 10, but Le Pen, whom he had trounced in 2017, had a strong showing, with good prospects for the April 24 runoff. That is because she can count on support from voters who cast ballots for the far-right polemicist Éric Zemmour and, potentially, from antiestablishment members of the working class. To be sure, the majority of supporters of the left-wing politician Jean-Luc Mélenchon—who managed to capture almost 22 percent of the votes in the first round—are unlikely to rally to Le Pen. But they have yet to be convinced to support Macron.

The 2022 race is nothing like 2017. The perceptions of the two candidates have changed. Macron’s famous pragmatism is now viewed as opportunistic, his Gaullist distance as arrogance. For her part, Le Pen has softened her image and does not instill fear as she used to. Meanwhile, as the left-wing and right-wing traditional parties have lost support, the French have grown increasingly transactional. They expect the candidates they vote for to make a material difference in their lives. Disappointed with Macron and unafraid of Le Pen, many could be tempted to abstain. Macron’s challenge for the second round, then, is to convince voters, in particular Mélenchon’s, to cast a ballot for him instead of abstaining. For that, Macron cannot just count on winning over voters who are disgusted with the far right. He will need to demonstrate that casting a ballot for him will produce meaningful change in his governance.

MYSTERY MAN
Macron is a self-made president. He eschewed the traditional avenues to power, creating a new centrist political party, La République en Marche, in 2016, just a year before his first presidential campaign, which marked the first time he had run for office. Political plasticity is his brand. Voters today regard him as center-right, and he advocates reforms such as raising the retirement age and scaling back generous social subsidies. Macron, however, occasionally skews left. In response to the gilets jaunes, or “yellow vests” protests, which started as a spontaneous mobilization against fuel hikes and morphed into an antiestablishment movement, the president launched a Grand Débat National (Great Big Consultation) in which government officials, including Macron, heard grievances from French citizens across the country. Macron also promoted “whatever it costs” public spending to address the economic fallout in the aftermath of the COVID-19 pandemic. And his current campaign platform pledges support for single mothers and more funding for education.

Despite these moves, the French left has been disappointed by Macron. Activists find his agenda on climate action, policing, health care, and education to be insufficiently progressive. Macron’s public persona, moreover, has fueled the perception that he is aloof and aligned with the rich. As the uncontested leader of the party he created, Macron has centered decision-making in the Élysée Palace. He declared his candidacy on the last possible day with a simple “letter to the French,” held just one major political rally before the first round, and refused to debate his opponents before the runoff.

His regal approach to seeking a second term underscored the reservations many French voters harbor about their president. An Ipsos-Sopra Steria poll of French voters conducted between March 21 and March 24 found that only 27 percent of respondents felt Macron “understands our problems” compared with 46 percent for Le Pen. Late in the campaign cycle, a controversy deepened public discontent with Macron: the French Senate published a scathing report on the government’s use of consulting firms, including the U.S. behemoth McKinsey. Shortly afterward, the financial public prosecutor announced an investigation into whether McKinsey took part in money laundering and tax evasion. The links to Macron are tenuous at best, but the news helped cement the public perception of him as an out-of-touch elitist. He is now contending with virulent anti-Macron sentiment on both the left and the right. Many who feel no sympathy for Le Pen may yet have trouble voting for the incumbent.

LE PEN 2.0
Le Pen’s fortunes have been buoyed not just by Macron’s foibles but also by the faults of her rivals on the right. If any far-right politician was to be successful this year, many thought it would be Zemmour, an archconservative anti-immigration zealot who launched his presidential candidacy in the fall of 2021. Zemmour berated Le Pen for being insufficiently hard-line on immigration. His own positions on the issue were flat-out racist. He warned that the population of Muslims in France represented a “great replacement” of the putatively authentic—that is, white and secular—French people. One solution, he declared, would be the “remigration” of foreigners to their countries of origin. Zemmour garnered support not just from Le Pen’s voters but even from members of her own family: Marion Maréchal, Le Pen’s niece, is a darling of the far right and endorsed Zemmour instead of her aunt. A bewildered Le Pen appeared on TV in March lamenting the betrayal.

Zemmour’s extremism, however, ultimately rebounded in Le Pen’s favor because she looked less radical by comparison. Softening her image has been a long-gestating project. Since taking over the National Front party from her father, Jean-Marie Le Pen, in 2011, Marine Le Pen has worked to make her party, now called National Rally, more palatable to a broader swath of the French public. She doubled down on the project after her loss in 2017, convinced that automatic voting against the far right (a phenomenon called le front républicain) was the reason she failed to pass muster with most voters. Once mocked for her pugilistic manner, she has become more affable in her public appearances, wears pastel colors, and smiles a lot. She speaks of her travails as a single mother and about her affection for cats.

In her third bid for the presidency, her political platform has also evolved from far-right nationalism to far-right populist sovereignty. In particular, Le Pen has focused her campaign on economic grievances, downplaying her nationalist proposals. This dovetails with the priorities of French voters, more than half of whom say they are concerned about a decline in their purchasing power. The war in Ukraine and the sanctions against Russia have exacerbated those fears, particularly as the price of gas has risen.

Le Pen’s fortunes have been buoyed not just by Macron’s foibles but also by her rivals on the right.
The economic impact of sanctions on Russia is one reason why Putin’s war does not appear to have damaged Le Pen’s candidacy, despite the fact that she has long been a Putin sympathizer. She opposed sanctions on Russia when Putin illegally annexed Crimea in 2014, the same year her party took out a $10.2 million loan from a Czech-Russian bank with ties to the Kremlin. She met with the Russian president three years later in Moscow. After Putin’s invasion of Ukraine, however, she announced that she stood with Macron in a time of crisis, although she has argued against imposing sanctions on Russian gas and oil because of the effect they would have on French households. She also advocates for a strategic rapprochement between NATO and Russia “as soon as the Russian-Ukrainian war [is] over” and promises to withdraw France from the NATO military command, a move likely to destabilize the alliance.

As Le Pen’s agile handling of the Ukrainian crisis limited the negative impact on her candidacy, Zemmour’s numbers started to falter. His lamentation that the war in Ukraine was a “distraction” from the real threat of foreigners and Muslims did not go down well; nor did his proposal that rather than welcome refugees to France, the government should subsidize the Polish government to resettle Ukrainians in Poland. In the run-up to the first round, nationalist far-right voters realized that they would need to adopt an approach of vote utile (strategic voting) to ensure that a candidate aligned with their ideology made it to the second round. Many rallied behind Le Pen, leaving Zemmour with just seven percent of the vote.

CRISIS OF LEGITIMACY
Roughly 80 percent of Zemmour’s supporters say they will support Le Pen in the general election, according to an Ifop-Fiducial poll, which means she can continue attempting to woo more middle-of-the-road French citizens without worrying about her right flank. Le Pen has carried out a skilled campaign, trumpeting her economic message rather than her anti-immigration measures, polishing her image, and reducing the stigma associated with voting for her. No matter that her program remains bigoted and would be detrimental to both France’s global standing and European cohesion: she speaks about pocketbook issues and her platform resonates.

To assure a second term in office, Macron urgently needs to re-demonize Le Pen, whose political makeover is only skin-deep. Macron must also reconnect with left-wing voters, whom he has alienated for the past five years and who voted overwhelmingly for Mélenchon in the first round. This will be a tall order and a harder task than it was in 2017: many left-of-center voters who cast ballots for Macron were disappointed in his presidency. Some will vote for him again merely to block Le Pen—but if he hopes to curtail the risk of abstention, he will need to prove their issues are the ones he will center on in a second term. In particular, Macron has yet to embrace a truly ambitious climate strategy—a main feature of Mélenchon’s platform—which would have the added benefit of giving him political capital for aggressive emission cuts.

Macron’s task is not so much to demonstrate that the fate of Europe and the world hinge on his reelection but rather that he understands and will respond to the struggles and concerns of everyday French people. Even if Macron is reelected, a second term will not be smooth sailing. The far right will probably have its best showing in history on April 24, and that will embolden supporters ahead of the legislative elections in June. At the first sign of reform, the risk of street protests will be high. If he is able to pull through, Macron will have to be more responsive to his constituents and reach out to working class voters, young people, and environmentally conscious and social justice activists. He will need to build consensus in a way he hasn’t thus far.

Post Views: 53
Previous Russians at War
Next 11 Crucial Facts About the Ukraine War