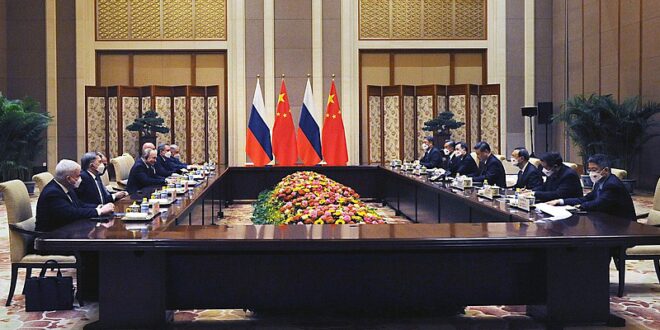 Russia’s invasion of Ukraine and the unprecedented sanctions imposed against Russia by the United States, Europe and other countries are negatively impacting the global economy. The European economy is under particular strain due to its dependence on Russian energy and the huge flow of refugees it is absorbing. The direct impact on the Chinese economy is expected to be relatively muted though still negative, at least in the short run.

The jump in global energy prices stemming from the war is bad news for China given its dependence on energy imports. To meet its carbon reduction goals set within the current Five Year Plan, China planned to transition away from coal through additional natural gas imports. One of the outcomes of the Chinese leaders’ ‘Two Sessions’ in early March 2022 was to pause annual carbon emission targets — while keeping the overall 2025 targets — to gain some flexibility amid soaring energy prices.

Beyond the temporary delay in China’s reduction in carbon emissions, there is also a potential risk of China increasing its energy imports from Russia, especially in the event of a total embargo on Russian energy imports by the EU.

The other immediate downward pressure on the Chinese economy is the Western sanctions imposed on Russia. Chinese corporations and financial institutions need to be careful when trading with or investing in Russia. Chinese banks are no longer offering letters of credit for trade with Russia and Chinese energy companies, including Sinopec, and are putting aside their projects with Russian counterparts.

But given the size of China’s economy, the impact of this retrenchment from Russia should only be moderate. Rather than fully cut ties with Russia, China just needs to avoid hard currency payments and certain targeted entities, such as the Russian central bank and the Ministry of Finance. Several large Russian banks are still allowed to use SWIFT, evidence that the sanctions are not tight enough to force China to stop all economic relations with Russia.

While the direct impact of the war on China seems limited, the key to better gauging its impact is China’s position on the conflict. On the one hand, China’s rhetoric is anti-US and anti-NATO. Beyond holding the United States responsible for the conflict, China has repeatedly opposed Western sanctions against Russia. But such language runs counter to the actual decisions taken by Chinese financial institutions and companies, which confirm China’s adherence to Western sanctions.

This means that China will abide, even if reluctantly, to the letter of the law but not necessarily to the spirit of the law. China will use any space available to support the Russian economy where it touches on key Chinese interests — energy security, military cooperation and governance of the Arctic.

China’s ability to leverage its economic size to foster the use of its Cross-Border Interbank Payment System (CIPS) and currency is limited. CIPS uses SWIFT as a messaging system with no immediate substitute. China’s digital renminbi, a potential substitute, faces significant challenges in facilitating cross-border transactions.

Even if a new messaging system became operational, it would need to be adopted by many financial institutions. SWIFT has 11,000 members in 200 countries and conducts 42 million transactions per day, while CIPS has about 1000 members in half the number of countries. CIPS does not have the liquidity or the members to make it comparable to the platform that virtually all banks use for their international transactions, the Clearing House Interbank Payments System.

Russia would also need to accept the renminbi for commercial transactions with China, including its exports. At this stage, it seems unlikely Russia would want to enter a renminbi-centric financial system and reduce its access to other convertible reserve currencies.

The war in Ukraine is a negative shock to the Chinese economy but beyond high commodity prices the direct impact remains limited. The shock is compounding the economic impact of a severe COVID-19 wave, a cyclical deceleration and negative market sentiment stemming from a regulatory crackdown.

China’s stance on Russian aggression in Ukraine is key to gauging the economic impact of the war. Despite China’s willingness to comply with the letter of the law on sanctions, it seems willing to take some risks on the spirit of the law to protect its lasting strategic relationship with Russia. This puts China on a razor’s edge and could see it caught in the crossfire of Western sanctions and the decisions of foreign companies operating in China.