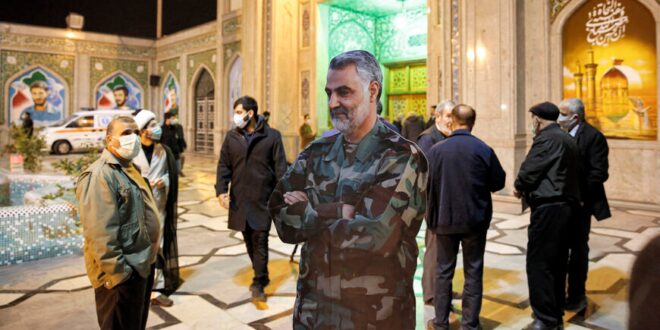 While the United States and Iran seem to have hit a dead end over the Islamic Revolutionary Guard Corps, one answer could lie in Iran’s regional policies, including its dialogue with Saudi Arabia.

The call to prayer echoes through the labyrinthine alleys of Tehran’s smaller market that lies to the north of the capital. In Bazaar e Tajrish, shops are packed with customers despite the crippling sanctions and the devaluation of the Iranian currency that shrank their dining tables and dwarfed bank accounts.

There are some positive indications, with the IMF projecting 2.5% growth, while inflation will still be around 40% in 2022.

Hopes to revive the 2015 nuclear deal were high until the end of February, when the war in Ukraine took priority, and there seemed no clear compromise on whether and how the Biden administration would delist the Islamic Revolutionary Guard Corps (IRGC) as a foreign terrorist organization.

These days, there’s only slight hope a miracle could happen and convince either the United States or Iran to make a concession that would facilitate the deal’s revival. While all the technical aspects of the deal have been cleared over the past months, former US President Donald Trump’s legacy continues to prevent the negotiators from reaching a deal, adding to concerns that Iran’s nuclear program might be heading toward a nuclear breakout.

The center of the debate is the issue of removing Iran’s IRGC from the United States’ list of foreign terrorist organizations, Alongside the sanctions that were imposed on the corps by the Trump administration. Tehran sees the delisting as a prerequisite for any deal, while the United States sees it as a separate issue. Whether the onus is in Tehran or Washington, it’s obvious that the issue is a landmine that decision-makers in both capitals want to avoid.

Even Iran’s Supreme Leader Ayatollah Ali Khamenei is reluctant to get involved in any move that could offer any legitimacy to the January 2020 airstrike that killed Quds Force commander Qasem Soleimani.

The drone strike led to an unprecedented escalation between the United States and Iran. Then president, Trump said he ordered a precision strike to terminate a top Iranian commander who was plotting “imminent and sinister attacks” on Americans, saying that the move was one of deterrence rather than aggression. Iran responded on the day of Soleimani’s burial by pounding the American Ain Assad military base in Iraq with a barrage of 14 rockets. No US soldiers were killed in the attack.

A source close to the IRGC told Al-Monitor on condition of anonymity, “The killing of Soleimani was based upon the designation of the corps as a terrorist organization, and keeping them and the Quds Force on these lists will mean accepting their right to kill the commanders, whether now or later.”

Iranian officials have vowed revenge for their slain commander. Khamenei reiterated, “Those who ordered the murder of Gen. Soleimani as well as those who carried this out should be punished. This revenge will certainly happen at the right time.” Recently, President Ebrahim Raisi stressed that Trump, “the aggressor and the main assassin, the then-president of the United States, must face justice and retribution” alongside former US Secretary of State Mike Pompeo “and other criminals.”

During a Senate Foreign Relations Committee hearing on April 26, Senator Ted Cruz asked Secretary of State Antony Blinken if it’s true that the IRGC is actively trying to murder former senior US officials. Blinken responded vaguely, “There is an ongoing threat against American officials both present and past.”

In March, the State Department told Congress it’s paying more than $2 million per month to provide 24-hour security to Pompeo and a former top aide, both of whom face “serious and credible” threats from Iran.

The source close to the IRGC told Al-Monitor that the United States offered to delist the organization in return for a guarantee that Iran will end its efforts to avenge Soleimani. “The supreme leader was clear: This is something that Iran can’t compromise for any price,” the source stressed, adding, “Those who planned, ordered and executed will always be haunted by Haj Qasem’s soul.”

With so many other element overshadowing the fate of the nuclear deal, it’s clear that conventional views on how to overcome the dilemma won’t lead to solutions. There might be a need to look outside the box to save the 2015 agreement, or maybe create the needed circumstances to build a new deal upon the ashes of the old one.

Since the main issue now is the IRGC and the role it’s playing in the region, perhaps the organization itself could offer the solution.

“Iran is unlikely to give a specific guarantee that it will not target Americans it believes are responsible for the assassination of Gen. Soleimani” stated Barbara Slavin, director of the Future of Iran Initiative at the Atlantic Council, in an interview with AlMonitor, but she added that Tehran has sought de-escalation of tensions with its Arab rivals, most notably Saudi Arabia, and has supported a cease-fire in Yemen, “so Iran could issue a vague statement about the need for the region to solve its conflicts through diplomacy while quietly shelving any ongoing plots against Americans.”

The cooccurrence of the nuclear talks with the Iranian-Saudi dialogue could open the door to viable initiatives. Aside from Israel, Iran’s Arab neighbors have serious grievances about the IRGC’s role in Syria, Yemen, Lebanon and Iraq. De-escalating regional tensions could create space for a de facto truce that could facilitate a solution on the nuclear front, but that’s not something anyone can guarantee.

“The IRGC is the one military force that drives Iran’s deterrence policies and policies of asymmetric warfare in the region,” explained Adnan Tabatabai, the CEO of the Germany-based think tank CARPO.

Tabatabai told Al-Monitor that the higher the tension between Iran and the United States, the more Iran will want to to exert pressure on the United States and maintain its deterrence abilities in the region. He added, “The more Iran-US tensions can be eased, the more the tension between Iran and Saudi Arabia can be eased, the [more] relations with the UAE could be improved, the more Iran and its potential rivals could find a way for peaceful coexistence, the less need for the IRGC to adopt and conduct operations of deterrence in the region, be it attacks on US diplomatic mission, on military bases. Regional de-escalation will automatically reduce the regional presence of the IRGC and IRGC-linked forces in Iran’s immediate neighborhood, and this is why I believe that the ongoing Iran-Saudi talks are a very good additional track to the P5+1 or P4+1 with regard to the JCPOA.”

Back in Tajrish, adjacent to market lies the shrine of Imam Zadeh Saleh. The shrine is also where assassinated nuclear scientists have been laid to rest. They include Mohsen Fakhrizadeh, the man regarded as the father of Iran’s nuclear program, who was assassinated near Tehran on Nov. 27, 2020. Hasan Irlu, Tehran’s ambassador to the Houthi-controlled government based in Sanaa, who died of COVID-19 while under US sanctions for his membership in the Quds Force, lies alongside Fakhrizadeh. It’s a poignant picture of how intertwined issues are in Iran, where politics, the military and nuclear progress mingle as thoroughly as life and death.