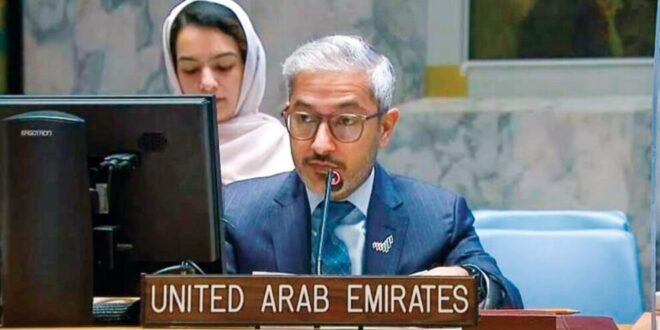 UAE Calls on Security Council to Reconsider Handling of Syria

The UAE has called for addressing security challenges and de-escalation in Syria to make progress in the country’s political process, according to Hashtag Syria.

According to the UAE News Agency, UAE Ambassador to the UN Mohammed Boushhab said during a Security Council session, that the Security Council’s handling of the Syrian issue — which has been deadlocked for many years due to the council’s polarizations and divisions — should be reviewed.

Boushhab said that the Security Council’s regular meetings were limited to restating different nations’ positions, without holding serious discussions aimed at advancing a peaceful solution that meets the Syrian people’s aspirations. He stressed the importance of continuing to engage all relevant parties in negotiations and dialogue, especially through the work of the Constitutional Committee. Boushhab indicated that the dialogue should focus on common points of a constitutional nature and be implemented, led, and owned by Syria.

Boushhab welcomed the agreement to hold the eighth session of the Constitutional Committee next May. He called on the committee to continue its work periodically so that all parties can engage in substantive discussion. Bouchhab stressed the UAE’s support for efforts that will boost early recovery projects in Syria.

Boushhab highlighted the need to focus on restoring the Syrian people’s basic needs and services such as electricity, water and food. He noted the difficult situation of the Syrian people, with the rise in commodity prices due to the economic crisis in Syria. This crisis coincides with the global rise in food and energy prices, as well as the significant destruction of the electricity sector stemming from terrorist acts and damage from the war

At the end of his speech, the UAE ambassador stressed that the positions of all Security Council members on the Syrian issue have become clear. He noted the importance of considering, during the coming months, how to revive a fruitful debate on resolving the Syrian crisis, instead of merely managing the crisis.