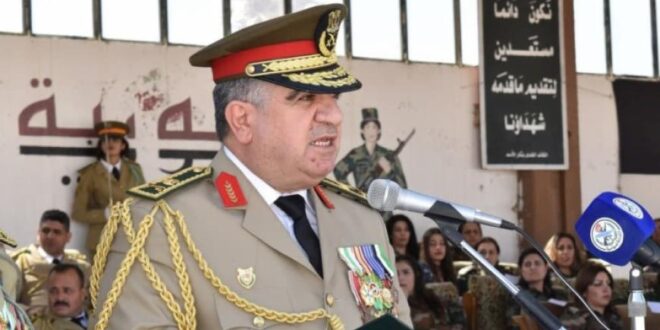 Major-General Ali Mahmoud Abbas is Syria’s fifth defence minister since the outbreak of the revolution in 2011, according to Syria TV.

Abbas replaced General Ali Abdullah Ayoub, who has served as defence minister in the Syrian regime’s government since 2018.

Abbas hails from the village of Afrah in the Zabadani area of Rural Damascus. He will serve as the fifth defence minister in the Syrian regime’s government since the Syrian revolution broke out in mid-March 2011.

Before Abbas became defence minister, four different figures have served in the role since the outbreak of the revolution. The first of these, Daoud Rajha, was killed by the bombing of the “crisis cell” (National Security Building) in July 2012. He succeeded Ali Habib, who held the position from 2009 to August 2011.

Before the Syrian revolution, Mustafa Tlass was defense minister for 32 years under Hafez al-Assad. He was then replaced by General Hassan Turkmani, who was removed from his post in 2009 and later killed in the “crisis cell” bombing.

Post Views: 111
Previous UAE Calls on Security Council to Reconsider Handling of Syria
Next “Syria Is a Hot Conflict, Not a Frozen One,” Pedersen