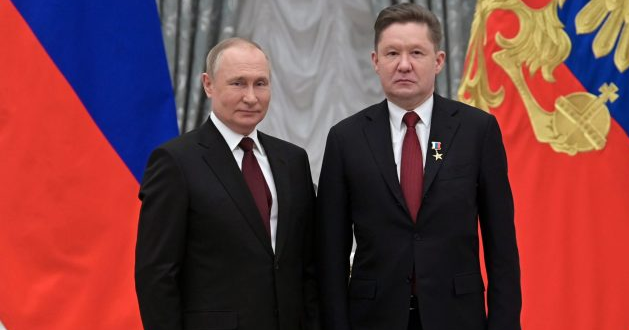 Europe can find alternatives to Russian gas, but can Russia find the consumers to replace Europe?
In halting gas supplies to Bulgaria and Poland, the Kremlin is putting “false political ideas” ahead of the interests of Gazprom and the Russian economy, Russian energy analyst Mikhail Krutikhin says.

Poland, which according to Krutikhin “can do without Russian gas,” is being punished for its leading role in supporting Ukraine, he said.

But Bulgaria is being blackmailed to change course, and may serve as a model for Serbia should President Aleksandar Vucic sign up to Western sanctions on Russia.

“There is a new government [in Bulgaria] which advocates union and cooperation with the European Union, with the United States, with the West,” Krutikhin, co-founder of Moscow-based energy consultancy RusEnergy, said during an interview in English via Zoom.

“And I think the decision of Gazprom to immediately stop deliveries of gas to Bulgaria is an instrument of pressure to blackmail the company into reversing the foreign policy or demonstrating to the Bulgarian population that this company cannot handle the economic situation.”

As a candidate for membership of the EU, Serbia too is under pressure to join the Western sanctions on Russia, but has so far refused to do so, not least given the importance of Russia’s United Nations Security Council veto when it comes to frustrating the international integration of Serbia’s former southern province, Kosovo.

Dependent on Russia for 90 per cent of its gas, Serbia may face a similar fate to neighbouring Bulgaria should it sign up to sanctions, said Krutikhin. “Then, I think you can expect the termination of gas supply,” he said.

Krutikhin was scathing of the Kremlin’s strategy, saying Europe was only accelerating efforts to find alternative sources of gas, while “does not have any alternatives” to Europe as a consumer.

Europe has alternatives, but does Russia?

Gazprom announced in late April that it was halting the supply of natural gas to Bulgaria and Poland over their refusal to pay for it in Russian roubles, a demand Putin made in response to international sanctions on Moscow over its invasion of Ukraine.

Even before the cut-off, the war had injected new urgency to a European policy of cutting dependence on Russia for oil and gas supplies.

But while Europe can find alternative supplies, Russia will struggle to replace Europe as a consumer, he told BIRN.

“President Putin said ‘We are going to reroute our gas for domestic purposes.’ I don’t know where and how they are going to do that,” said Krutikhin. “To build a new pipeline to some distant villages, maybe 200 kilometres from the main pipeline, where a couple of older women live – it’s not the solution.”

Even supplies to China cannot compare with the volumes Russia sold to Europe last year, he said.

“So, if Putin threatens to reroute the gas to Asia or to China, this is just not true, this is not a correct statement.”

Despite criticism in some quarters that the EU should go further in expanding sanctions on the Russian energy sector, Krutikhin said gas supplies were down anyway: “We already see that the flow of gas is decrease, not very sharply, but it’s decreased,” he said.

Regardless of the war, the sanctions and counter-sanctions, Russian natural gas continues to flow to Europe via Ukraine.

“The Ukrainian operator of the pipeline does everything it can to maintain the security and safety of the infrastructure,” said Krutikhin. “They cannot afford breaking the contract; the contract [comes] first.

And the gas will keep flowing, he said. “Natural gas is now the main export commodity of Russia; it brings, it fetches, more cash to the federal budget than oil now.”

That Russia uses its energy resources as a geopolitical tool is not new.

Krutikhin pointed out that TurkStream, which cuts out Ukraine by bringing Russian gas to Europe via the Black Sea, Turkey, Bulgaria, Serbia and Hungary, “is a political pipeline,” not a commercial venture.

“It is not Hungary, it is not Serbia who paid for that, for the excessive transportation costs, it is Gazprom which is losing money in this deal.”

Likewise, Gazprom’s presence in Serbia, where it holds a majority stake in oil company NIS, is also political, Krutikhin said.

“It cannot be financial because really the market is not very high,” he said.

Overwhelmingly dependent on Russian gas supplies, Serbia has a long term contract with Gazprom, extended in December 2021 for six more months under what President Vucic said were “friendly” terms agreed with Putin.

Serbia might still be counting on some kind of a discount, Krutikhin said, but if Serbian policy changes “then expect some sort of a new formula for gas, because we’ve seen a lot of examples of such behaviour of Gazprom.”

“A very good example is Bulgaria,” he told BIRN.

“So, if there are sanctions, if Serbia joins sanctions and maybe some sanctions are imposed on NIS because it… is a subsidiary of Gazprom, then I think you can expect the termination of gas supply.”