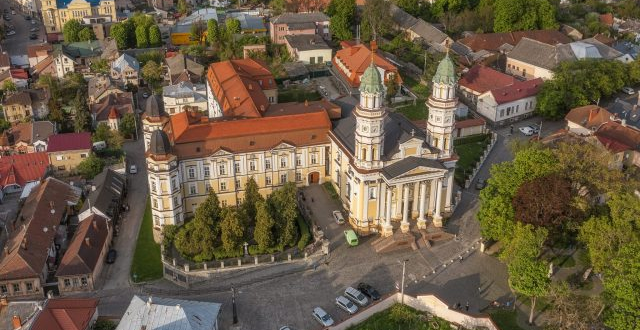 Russia’s invasion of Ukraine has brought other historical tensions to the surface as some in Kyiv accuse neighbouring Hungary of coveting their territory.

Andras Bartal has a dream. It will take decades to realise it, but, in Bartal’s vision, Hungary will take back Transcarpathia, a region or oblast in the westernmost tip of Ukraine.

For Bartal, 50, a Budapest-based member of Mi Hazank (Our Homeland Movement), a far-right Hungarian party that won seven seats in the April 3 parliamentary election, Transcarpathia is “historically and spiritually part” of Hungary, stolen following the carve up of Europe after the fall of the Austro-Hungarian empire at the end of World War I.

“We can never give up on the Hungarians living there and our abducted territories,” he tells BIRN, advocating a stealthy approach, “just gently, carefully, diplomatically, step by step”, for a revanchist policy that would, if put in practice, represent a major geopolitical shock in Eastern Europe.

Bartal expresses the sentiments of some Hungarians who are haunted by the “trauma of Trianon” – a sociological phenomenon exploited for decades by the country’s far right and nationalists. It refers to the 1920 Treaty of Trianon, which stripped Hungary – a loser as part of the Austro-Hungarian empire in World War I – of two-thirds of its territory and almost half of its population.

Now, many Ukrainians fear that the Hungarians will seek to capitalise on Ukraine’s fragility after Russia’s invasion and make a move in order to reverse the historical injustice of Trianon.

These fears have recently been fuelled by the Hungarian government’s ambivalent response to the Russian invasion. In the last few weeks, two Ukrainian senior officials, Deputy Prime minister Iryna Verschchuk and Oleksiy Danilov, a head of National Security and Defense Council, separately speculated that Hungary’s refusal to take a tough line against Vladimir Putin was – in Verschchuk’s words – “maybe because they silently dream of our Transcarpathia”.

Figures close to Viktor Orbán, the Hungarian prime minister, and his nationalist-populist Fidesz ruling party have stoked the tension. “We must be emotionally and financially ready to welcome the Hungarian territory,” Csaba Belenessy, a pro-Orban commentator, said in late March.

Separated from the rest of Ukraine by the bend of the East Carpathians, the region called Zakarpatska Oblast in Ukrainian is one of six former Hungarian lands that over the last hundred years have become a source of Hungary’s nostalgia for its lost greatness. Yet the Transcarpathia of today, like most objects of nostalgia, looks in reality little like its idealised version.

With 1.25 million inhabitants, it’s one of the least developed and poorest regions in Ukraine, troubled by high unemployment, poor infrastructure and an overly developed grey economy. The ethnic colourfulness can be a headache too.

Transcarpathia is home to nearly 157,000 ethnic Hungarians who are largely concentrated in the areas close to the border with Hungary in the district of the Berehove Raion. As Bartal sees it, they have long been suffering from “unprecedented persecution” by the Ukrainian state.

Hungarians do have their own organisations in Transcarpathia, linked financially and ideologically to Orban’s Fidesz party, as well as schools, media, a theatre, and monuments dedicated to Hungarian heroes with streets named after them written in Hungarian. The Fidesz-dominated Hungarian parliament has also made it easier for them to apply for Hungarian citizenship and allowed them to vote in local and national elections. These factors, as well as proximity of the border to Hungary, make especially younger generations poorly integrated with the Ukrainian community, including their poor command of the Ukrainian language.

The main source of tension is an education act passed by the Ukrainian parliament in 2017 that imposed restrictions on the use of the languages of national minorities, including Hungarian, in school education. Aimed at the Russian language as part of efforts to ‘de-Russify’ the public space and strengthen Ukrainian identity, the legislation backfired to the extent that Budapest blocked ministerial-level NATO-Ukraine meetings and started to accuse Kyiv of nationalism and extremism.

Yet the ostensible ‘victims’ cited by Bartal don’t feel all that particularly persecuted. Asked about Belenessy’s provocative statements, Laszlo Zubanics, head of the Hungarian Democratic Federation in Ukraine (UMDSz), calls the comments “a theatre” in the Hungarian election campaign. The only goal of the spats between the governments in Budapest and Kyiv is “propaganda”, he says.

This cautious pragmatism of Hungarians from Transcarpathia is sometimes in striking contrast to the fierce nostalgia voiced in a distant Budapest for domestic political gains or any honest “care” about the wellbeing of fellow ‘citizens’.

Karolina Darcsi, spokesperson for the Cultural Alliance of Hungarians in Sub-Carpathia (KMKSz), another influential Hungarian organisation, says that in the coming weeks and months ethnic Hungarians will not be pushing either for amendments to the Ukrainian language law or any sort of autonomy, a concept that has been discussed since early 1990s. “There is neither such an aspiration nor initiative,” she states.

And to make things even clearer, Darcsi adds: “Hungary does not plan to carry out any military intervention in the territory of Ukraine.”

Others put it more colourfully. Dmitro Kobrinski, a local philosopher-turned-head of the Berehove-based centre for helping refugee children, insists that Transcarpathia does not resemble “the balloon which may explode if touched”, as with conflicts in Ukraine’s Donbas, nearby Transnistria in Moldova, or Georgia’s Abkhazia and South Ossetia regions.

“We live peacefully next to one another,” says Kobrinski. “I have friends among Hungarians and they are one of the most reliable people. I just know we differ politically.”

He points to Transcarpathia’s turbulent history to stress what can be expected. For nearly a thousand years the region belonged to Hungary. But in the 20th century alone it passed from Czechoslovakia, through Hungary again, to the Soviet Union, and finally an independent Ukraine, with a short-lived Romanian occupation in 1919 and the quasi-independent state of Carpatho-Ukraine in 1938-1939.

“The Hungarians know that everything, including states and authorities, is temporary,” Kobrinski tells BIRN. “I don’t think they consider the war as ‘their war’, but I guess they won’t be trying to capitalise on it either.”

After Putin’s shocking invasion nothing can be ruled out, of course. Yet, in Kobrinski’s view, Hungarians will be “rather waiting for what life brings”, just as they have done in the past.

Ferenc Nemethy, a 75-year-old pensioner based in the suburbs of Uzhhorod, Transcarpathia’s capital, is also uninspired by the quasi-revanchist rhetoric of some in Budapest.

Although he finds it necessary to stress that he “feels a victim of history” – quite a popular phrase in this region – he is quick to add that he has never experienced any sort of persecution because of his ethnicity. If he faces any serious troubles, he says, they are connected with his age, poor economic situation and Russia’s war.

For most people in Transcarpathia, rhetorical spats with Hungary are the least of their worries.

Squeezed between borderlands with EU member states, the region has become a major transit point for people fleeing war-torn places and wishing to leave the country. Since the Russian invasion, more than 750,000 people have entered Hungary and Slovakia from Transcarpathia, with an additional 700,000 escaping to Romania from the region.

The city of Uzhhorod alone, with a population of 112,500, at one point was flooded with more than 60,000 refugees from other parts of Ukraine.

“We had an offer to head to Israel,” Tatiana Dunaevska, 62, a pensioner, who spent two weeks in besieged Kyiv and reached Uzhhorod after a 24-hour journey via Lviv, tells BIRN. “It’s a great welcome we have been receiving here, but, once the situation improves, we want to go back home, even tomorrow.”

Along with her husband, brother, son, daughter-in-law and two grandchildren, Tatiana found a temporary home at one of Uzhhorod’s public spots converted into refugee centres. They sleep on mattresses and are accompanied by around 100 fellow refugees, including families with toddlers and pets.

The newcomers are just one of a few, although perhaps the most visible, examples of the reality of war having barging into Uzhhorod’s sleepy life: several times a day, air raid sirens sound; underground spots, such as discos, have been turned into bomb shelters; city lights are turned off in the evenings and at nights; and there are cash withdrawal limits. For many residents it was a shock to see all this in their city with cobbled streets and a Habsburg charm preserved despite the long Soviet rule.

Yet after this initial shock, the atmosphere is now livelier once again. Restaurants and cafes are bursting with people in good cheer, youngsters hang around on the banks of the Uzh river, tourist attractions are happy to welcome visitors.

“War is still an abstraction,” says Oleh Sirko, an IT specialist. “This free attitude will change only when we will hear the explosions here, in Transcarpathia.”

Mykola Yakhno, 78, based in Berehove but born in the Donbas, one of the Ukrainian regions at the heart of the conflict with Russia, has a dream too, but strikingly different from that of Bartal, the Hungarian nationalist.

Mykola wants a democratic Ukraine with a strong Germany-like parliamentary system, yet with a strong role of the Orthodox Church, in the EU and NATO – a home for all, including ethnic Hungarians.

“Happiness is relative; what makes me happy, can make you sad, and so on,” he says. “The thing is to find a good balance, that’s all.”