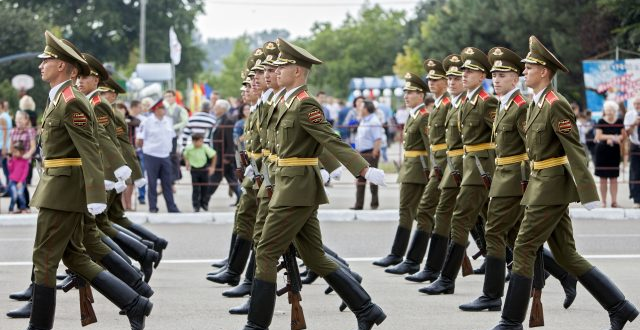 The separatist authorities in Tiraspol are being pulled steadily into the war between Russia and Ukraine despite their best efforts not to get involved.

Given its geographical proximity to Ukraine, and the high number of Ukrainian citizens living in the Transnistria, the de-facto authorities of the breakaway Moldovan region have sought to remain neutral in the ongoing conflict.

But, despite the best efforts of its separatist leaders, it appears that the war in Ukraine may have finally spread to Transnistria.

Although the separatist regime is dependent on Russia for its survival, the authorities have refused to officially endorse Russia’s invasion of Ukraine. They have consistently reassured their citizens, as well as the international community, that Transnistria has no intention of getting involved in the war in Ukraine.

Recent allegations by the government in Kyiv that Russian soldiers stationed in Transnistria were preparing to attack Ukraine were dismissed by the separatist regime in Tirasopol.

It points to the fact they have taken in over 20,000 refugees as “proof” that they have no intention of attacking Ukraine.

However, tensions in Transnistria have escalated in the past few days. On April 25, three men fired grenade launchers at the de-facto Ministry of Internal Security building in Tiraspol. While the building sustained heavy damage, there were no casualties, as it was a national holiday, due to Orthodox Easter.

The same night, it was reported that several explosions were heard at a military base in a village just outside Tiraspol.

The next day, Tuesday, April 26, residents of Transnistria woke up to the news that two large radio towers in the village of Mayak had been destroyed.

These radio towers were some of the largest in the region and were allegedly used to broadcast Russian propaganda.

According to the authorities in Transnistria, the attackers came from Ukraine. However, the Transnistrians were careful not to blame the government in Kyiv directly. Instead, they claimed that “nationalists” crossed the border and carried out the attacks.

Maia Sandu, President of Moldova, claimed that the attacks were the result of infighting between different factions in the separatist government. However, she did not elaborate. Unsurprisingly, these claims were refuted by the authorities in Transnistria.

On Wednesday, April 27, reports appeared claiming gunshots could be heard around the village of Cobasna, a small village in northern Transnistria that is home to a Soviet-era munitions dump, guarded by the Operational Group of Russian Forces.

The reports were quickly dismissed by officials, claiming the gunfire in fact came from Stanislavka, a village just across the border from Cobasna in neighbouring Ukraine.

It is still unclear who carried out these attacks. While Moldova and Tiraspol put out competing narratives, it is also worth noting that the attacks came just days after Russian Major General Rustam Minnekayev said Russia intended to “liberate oppressed Russian speakers” in Transnistria. Such claims have fed speculation that recent events could be part of a false flag operation.

An organised push to destabilize the region?

Looking at events in Transnistria over the past month or so, it is difficult not to conclude that recent attacks are part of an effort to destabilize Transnistria and perhaps draw it into the conflict.

Early in the war, rumours circulating on Telegram claimed that military-aged men were being asked to travel to Tiraspol for recruitment. The rumours circulated so widely that Vadim Krasnoselsky, de-facto President of Transnistria, felt compelled to publicly dismiss them.

Then, on March 21, almost every school in Transnistria received an email saying that mines had been placed around the building. Dozen more bomb threats were issued in the following days; several factories, shopping malls, hospitals, and even the Transnistrian University, received emails claiming their buildings were mined.

While no bombs were found, the de-facto authorities took these treats seriously. Many educational institutions returned to online learning, and Krasnoselsky vowed to bring these “email terrorists” to justice.

In light of these events, it is arguable that the recent attacks in Transnistria are part of a broader campaign to destabilize the region and perhaps draw Transnistria into the ongoing war.

The authorities in Transnistria are attempting to reassure people that the situation is under control. Krasnoselsky issued a statement saying Transnistria would not be dragged into the war. Similarly, Vitaly Ignatyev, the de-facto Foreign Minister, claimed that Transnistria had no intention of requesting more Russian troops be sent to the region.

Nevertheless, the authorities have been forced to impose new restrictions following the recent attacks. On April 26, Krasnoselsky announced that a “red level” terrorist threat would be introduced.

Checkpoints have been erected outside all cities and towns. Videos of cars being stopped and searched have circulated widely on Telegram. The Moldovan government has criticised the Transnistrian authorities for implementing such restrictive measures. However, the de-facto leaders argue that such actions are necessary, given the events of the past few days.

It appears that efforts on the part of the de-facto authorities to assure people that the situation is under control have not been entirely successful. Even before the recent attacks, following Russia’s invasion of Ukraine in February, the number of Transnistrian residents applying for Moldovan citizenship increased dramatically.

Following the attacks in Tiraspol and Grigoriopol, as well as the alleged fighting around Cobasna, many in Transnistria have fled to Moldova. Long lines are being reported at the various checkpoints along the de-facto border between Transnistria and Moldova.

What happens next is uncertain. Although they blame Ukrainians for the attacks, the separatist authorities are adamant that Transnistria will not be pulled into the war. Given its small population and lack of modern military equipment, it is unlikely that Transnistria could make much of a military difference. Nevertheless, with Russia seemingly intent on capturing the Ukrainian port of Odesa, not far from Moldova, tensions will likely remain high in Transnistria for the foreseeable future.