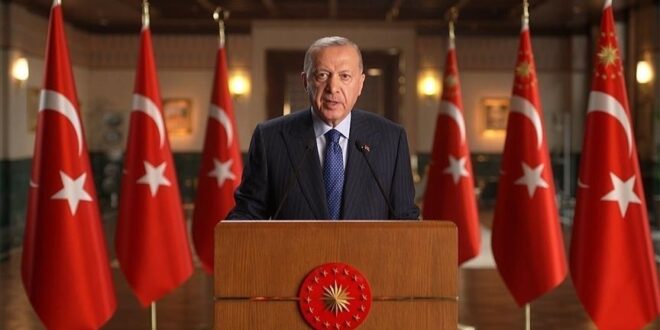 Erdogan to Return One Million Syrian Refugees to Northern Syria

Turkish President Recep Tayyip Erdogan has unveiled a new project in several parts of northern Syria, which will allow the return of one million Syrian refugees to those areas.

In a video message to Syrians on Tuesday, Erdogan said that the project covers 13 areas in northern Syria, including Azaz, Jarablus, al-Bab, and Tal Abyad. The project will provide the necessary needs for schools, hospitals, and homes, ensuring a “decent life” for returning Syrians.

“We are preparing a new project that will allow the voluntary return of the million Syrian brothers and sisters we host in our country,” he said, without disclosing a timeline, or any other additional details about the project.

Erdogan’s speech came on the occasion of a residential village opening in the Batbo district, north of Idleb. The ceremony took place before Turkish Interior Minister Suleiman Soylu, who visited the governorate on Tuesday.

According to the Turkish president, 500,000 Syrians have returned to the “safe areas” provided by Turkey since the launch of military operations in Syria, back in 2016.

The announcement of the new Turkish project comes against the backdrop of escalating statements and positions on Syrian refugees, which have been adopted by officials and party leaders in recent days.

Turkish officials’ statements matter to Syrians in Turkey, especially since the coming months are a prelude to Turkey’s parliamentary and presidential elections in 2023. Anti-Syrian rhetoric usually escalates in Turkey in the lead-up to elections.

Post Views: 40
Previous Russia Says Israeli Mercenaries Fight Alongside Extremists in Ukraine
Next Iran’s Revolutionary Guard and the Rising Cult of Mahdism: Missiles and Militias for the Apocalypse