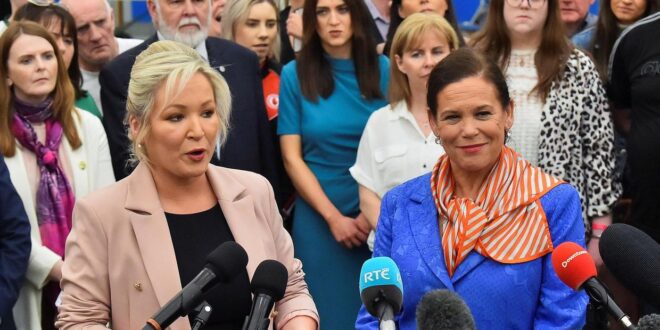 In the wake of the North’s election, more urgency is needed in the quest for compromise

The people of Northern Ireland have spoken – the question now is when will the politicians they have chosen get back to work? When the 90 members of the legislative assembly gather on Thursday we will be looking for signals of hope – not the old sterile politics dubbed “whataboutery” by the late great John Hume.

The election told us that people want change, that they want to end efforts to reach the future via over-dwelling upon this island’s dark past, that – above all – they sense the huge potential of this island and its people.

After a century of strange existence, Northern Ireland’s voters have told us three strong things. Firstly, Sinn Féin is the biggest party, making it the first nationalist group with a nominal entitlement to lead the power-sharing government in Belfast.

Secondly, perhaps more importantly, the “neither orange nor green vote” is finally emerging, as the Alliance Party has won 17 of the 90 assembly seats. This party’s parliamentary strength is a tribute to years of thankless endeavour by people who truly believed that there is a better way of doing politics in the North.

Thirdly, the North’s voters told us just how divided the unionist section of the community is. In many ways, it was this division which opened the door to Sinn Féin to nominally take the top spot.

The Democratic Unionist Party (DUP) has managed Brexit very poorly, going right back to the referendum campaign that led to the vote in June 2016. But it is not too late for it to take a more pragmatic position in the interests of all.

But, for all this change, when we look at the parliamentary arithmetic we see a great similarity in the party configuration. The DUP and Sinn Féin are still the kingpins, as they have been for the past 15 years.

In that way, both parties are starkly challenged to make the power-sharing structures work. Since the DUP belatedly joined the North’s peace process in 2007, the parliament and government have been idle for long periods.

This failure to engage and make the hard compromises to serve people’s needs reflects rather badly upon both parties. On this occasion Sinn Féin is additionally challenged, as opinion polls tell us it can expect to lead the government in Dublin after the next general election.

For this reason people in both jurisdictions will be watching Mary Lou McDonald, Michelle O’Neill and their colleagues. If they are to retain credibility they will have to show both pragmatism and generosity to make things work in the North from this coming week onwards.

Realistically, we are looking at some months of inter-party negotiations about the future government in Northern Ireland. That is the stuff of politics and infinitely better than the decades of sectarian violence many of us have lived through.

But, more immediately, we need a more encouraging tone to be injected into government-making talks. We also need a deal more urgency put into the quest for compromise. The citizens of Ireland – north and south – will demand this.