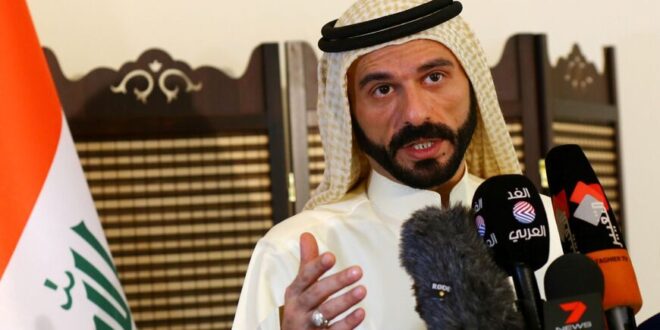 Iran-linked parties in Iraq are playing on perceived and actual support for once-ostracized Sunni leaders to divide their political opponents despite inherent risks.

Following series of meetings between Kurdistan Democratic Party and their Shiite and Sunnies allies in Erbil in order to form a majority government, a high delegation from Iran-linked Coordination Framework (CF) who oppose the majority government project, are planning visit the Kurdistan Region’s capital in the coming days to speak to the Kurdistan Democratic Party (KDP). This is happening after alleged attempts to divide the Sunni component of their rival alliance seems to have fallen short.

Some seem to have hoped that backing a sheikh long known for being the source of many problems would lessen the strength of a young politician from the same province who currently holds the highest position a Sunni in the country can aspire to.

When the Islamic State (IS) started taking over swaths of Iraq in 2014, Sheikh Ali Hatem al-Suleiman of the large Dulaim tribe took refuge at his villa in this capital of the Kurdistan Region.

The former Anbar Awakening “hero” would in the successive years spend a significant amount of time here as well as abroad, sources told Al-Monitor last year, though he was said to travel to Baghdad on occasion.

Suleiman had been known as a fugitive after supporting protests and anti-government activities included an armed insurrection in 2014 that many see as a prime reason why IS was able to take over and wreak so much destruction on both his own province and the rest of the country.

In 2014, Reuters reported that Suleiman had “recounted plotting ambushes against Iraqi special forces, which he said killed more than 100.” It added that he had “described how Islamic State fighters and his Sunni rebels gradually came together” against the government of former prime minister Nouri al-Maliki, with whom Suleiman had previously collaborated.

Iraq fought a brutal war against IS that left thousands dead between 2014 and December 2017, when it officially declared victory within its borders against the international terrorist organization.

Cells continue to conduct attacks throughout the country, however, and sources claimed to Al-Monitor that IS attacks have killed over a dozen people in the past two weeks in Anbar, Iraq’s westernmost province, where the largest tribal confederation is Suleiman’s Dulaim.

Anbar is also the home province of Iraq’s parliament speaker, Mohamed al-Halbusi, the youngest ever person to hold this position. Halbusi is also from a much smaller tribe than Suleiman’s Dulaim.

The public images of the two men from the same province are starkly different. Halbusi is mostly seen in business suits and slicked-back hair, or in jeans and other “Western” clothing, and his wife does not wear a headscarf. Suleiman, however, is almost invariably seen in a traditional thobe and headdress.

Some see Halbusi’s support in Anbar as a sign of the weakening tribe-based power structures. Iraqi Sunnis have over the years claimed that Saddam Hussein, for all his faults, fostered a longing for a strong state, and that thus tribalism tended to be stronger among Iraq’s southern Shiite populations than its western Sunni ones.

It is, however, axiomatic that of the two major cities in eastern Anbar – Fallujah and Ramadi – the first is where religion holds sway, and the second is where tribes do.

Halbusi is originally from Garma (or al-Karma) near Fallujah, while Suleiman was born in Baghdad but for many years held sway over the vast Dulaim tribal networks centered in Ramadi.

Halbusi seems to have proven he had the experience to do the job since he took on the role in September 2018. In January he was re-elected to the position, while the country has been unable to decide on either a president or a prime minister over six months after the Oct. 10 vote.

As Al-Monitor reported after those elections that Iraq’s Sunni community seems to have voted heavily for Halbusi’s party.

Iraq is believed to be about 60% Shiite Arab with significant Sunni Arab and Kurdish communities and other minorities.

Iran-linked parties have in recent weeks been struggling to divide a largely compact, diverse, and collaborative alliance called Save the Homeland that includes Halbusi’s Sunni alliance, the country’s largest Kurdish party (the Kurdistan Democratic Party, or KDP), and a movement under the popular Shiite cleric Muqtada al-Sadr.

Their apparent support for Suleiman’s much-publicized return to Baghdad is widely seen as part of these efforts.

However, this attempt seems unlikely to succeed.

In 2018, when he was governor of Anbar, shortly before being named parliament speaker, Halbusi had said that “there needs to be normality,” with arms under state control and “police on the ground and the army on the bases, not at the checkpoints.”

However, Suleiman wants more arms in the hands of local armed groups, similar to how he and his fellows in arms helped to defeat al-Qaeda in Anbar over a decade ago.

This stance fits well with Iran-linked militias’ demands to allow their fighters to retain weapons and checkpoints.

In a 2007 interview with a US publication, Suleiman said that Shiite groups in the southern part of the country had asked for information on how to form “sahwa” groups on their own, and in a 2014 interview with the Kurdish media outlet Rudaw, Suleiman claimed that “armed tribes can easily push out ISIS (IS) but that Maliki must first leave office.”

This did not happen. Though Maliki stepped down as prime minister in August 2014, tribal fighters in Anbar were forced to receive help from both the US-led coalition and from Iran-backed armed groups accused of committing numerous abuses against them.

Thousands of men from Anbar are still missing years later, many presumed dead. And some land is also still held by Iran-linked armed groups “for security reasons.”

Sources in western Anbar among tribal fighters both from the Dulaim tribal confederation and others reacted angrily to the idea that Suleiman might return to holding anything similar to the leadership role among Sunnis in Anbar he once had.

“He’s the cause of the problems we’re still dealing with in Anbar,” one claimed in Erbil. “There is simply no way that will ever happen.”