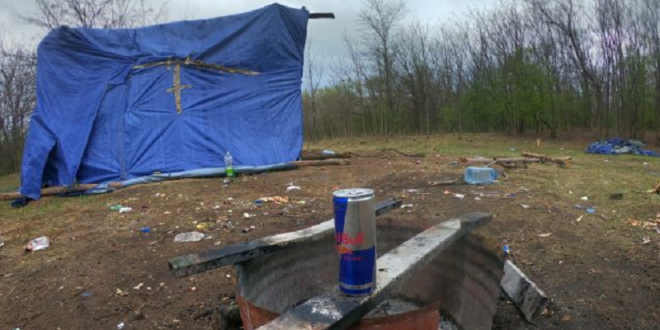 For Refugees on Serbia-Hungary Border, ‘the Game’ Goes on

While Europe shows compassion to refugees from Ukraine, those from outside Europe face the same obstacles to get to the West as before – as BIRN found out on a nighttime visit to a forest in northern Serbia.

If you didn’t know the context, it might look like a rave festival was taking place in the forest of Radanovac, on the outskirts of Subotica in northern Serbia, less than a kilometer from the Hungarian border.

People with backpacks come from different directions, on foot or by taxi, well-established tent camps lie scattered in different parts of the forest, with dozens sitting around campfires – amid piles of empty energy drink cans.

But it’s far from a rave. Radanovac forest has become a temporary home or planning base for hundreds of refugees and migrants trying to cross the Serbian border with Hungary and reach Western Europe.

“The action starts around 6pm. The new refugees come, and the old ones prepare for another attempt,” says Milan, not his real name, a local nature lover who acted as BIRN’s guide through the forest he knows so well.

“The Afghans had a camp there, but not anymore. They probably moved last night,” he says, as we drive through the forest.

“This is the place where they chilled out before attempting to cross the border; it’s hidden from view pretty well,” he says, showing us the thick forest coppice which borders a canal on one side, preventing outsiders from entering easily.

While Western public attention focuses on refugees from Ukraine, non-European ones are still on the move, squeezed between violent police tactics and often ruthless smugglers, who hold the key to their successful passage to a new life in the West.

According to data up to April 18, obtained by BIRN, some 3,679 migrants and refugees are currently staying in Serbian state-run camps, but many more are in squats, hostels, private homes or camping in forests, like Radanovac.

The people smuggling operation does not stop. BIRN sources in the Serbian security services report smugglers’ gang wars in the last months, noting at least two murders or disappearances of persons involved in this lucrative illegal business.

Vuk Vuckovic, from Klikaktiv, an organisation which helps refugees outside state camps, told BIRN that around 4,000 people are camping in squats or private accommodations in northern Serbia.

“Police brutality, according to statements of refugees, has become even more brutal, and border crossings are almost disabled due to the growing number of police patrols. As attempts to cross the border by refugees do not succeed, this pushes them even deeper into the hands of the smugglers,” Vuckovic says.

He condemns what he called “EU hypocrisy”, in creating a a sort of hierarchy of refugees in the Ukraine war, calling it “selective empathy”.

“We have humanitarian corridors in Romania and Hungary for Ukrainian refugees, and on the other side, the same countries are tightening their fences and piling police patrols to stop [other] refugees from Serbia from entering. That is just the latest example of selective empathy of the EU since the big refugee crisis started in 2015,” he says.

BIRN talked to refugees praying for luck in Radanovac, but also spent part of the night in the forest, observing the so-called “game” – the attempt to cross the border and finally start a better life in the EU.

‘Guards’, ‘guides’ – and taxis you can set your watch by
Radanovac forest is a protected area north of the city of Subotica, on the border with Hungary.

As we entered the forest from the west side, we bumped in to three refugees from Afghanistan. One, Ahmad, 24, accepted to talk to BIRN.

Obviously in a hurry, holding a “Hell” energy drink in his hand, the most common one among refugees, he was not willing to talk for long.

“We’ve been here in the forest for several days already, planning to go Germany, where I already have people who can help me to start a new life,” Ahmad says.

He shows a small scar on his hand and a band-aid, saying he “earned” it during one of his failed attempts to cross the border.

“We are going tonight again. What else?” he asks with the awkward expression of a person who has tried it all and feels there is no way back. Soon after, he and two of his comrades hit the road to prepare for tonight’s “game”.

During the drive through the forest, BIRN saw several improvised camps with tents. Some were empty, which means their inhabitants either succeeded in crossing, or are in the local villages or in Subotica, buying supplies.

In one of them, however, we found dozens of people in a tent. They were from Pakistan. After two young males, obviously “guides” in the smuggling network, gave us permission, one of them agreed to talk to us.

“I want to go to Italy. I have many friends there. I was an agricultural worker in my country, but I am not sure what will I do in Italy,” Ali, aged 22, from Islamabad, capital of Pakistan, says.

Asked how bad his country is, that he is willing to take this long and hard route to Europe, he says: “It is hard to live in Pakistan. It is in crisis. I came for a better future.”

He adds that the rest of his family plans to follow, once he gets on his feet in Italy. “My mother, father and brother want to come with me when I make some money in Italy,” he says. This is his fourth day in the forest.

The Hungarian police are the big problem. “They beat me a bit when I crossed before; I crossed three times already. I will try again and again, I won’t go back,” he says.

He says he paid 5,000 euros to smugglers in Pakistan in order to help him get to the Balkans.

By 7pm, taxis are coming from the nearby road, leaving more migrants and refugees, wearing backpacks and carrying bags full of groceries.

“You can time your clock on their arrival,” Milan jests, as we pass by in the car.

Just a hundred meters away from the border is the Tresetiste Lake, where locals enjoy nature and have drinks with friends and families. On the day of BIRN’s visit, a traditional fishing contest is taking place.

“These are practically two worlds, standing next to each other,” Milan observes, showing me an apparently fake Turkish passport, freshly printed, with Belgrade’s Nikola Tesla airport as an only border stamp on it.

“I found it just a couple of hundred meters from here,” he says.

The smuggling organizations are fully organized, with “guides” but also “guards”, which are strategically positioned on the forest edges in order to see who is coming close to the tent camps hidden deeper in the forest.

As BIRN approached one of them, a short guy in a jacket was on a video call. After presenting ourselves as journalists, he accepted our request and, without stopping the video call with his friend, led us through the forest to where the camp was.

On the verge of the forest, three bonfires were blazing with about a dozen men around each, mostly, it seemed, from Afghanistan. After some unwillingness to talk, one of them, 20-year-old Abu Malik, agreed to speak to BIRN.

“I crossed 12 times already but the police returned me. My country is no place to live. My plan is to go to Britain”, he says, adding that he has friends there.

Asked how hard living a life like this is, in the forest and the cold, he say: “I got used to it”.

“This is close to border and that is important. I have my goal,” he adds confidently. Asked whether he will join the “game” again tonight, he nods, taking a sip from his Hell energy drink.

“Every night,” he adds, shortly, passing the can to another guy. Energy drinks are obviously a reliable ally in the long night, fighting exhaustion and Hungarian border controls.

Long line of shadowy figures, moving in the dark
Tucked away in a car on the edge of the forest, overlooking a meadow that the refugees will have to cross before approaching the border fence, BIRN observed the attempts of some refugees to cross.

“Around 9pm, I expect the first attempt,” says Milan. He says the Hungarian police sometimes launch helicopters to oversee movements on the ground.

“It is a show, really. The Serbian police are not so active in preventing anything; the Hungarians are more motivated,” he adds.

Just as he said, around 9:15pm, a long line of black silhouettes, around 30 people, carrying long shiny ladders, glowing in the dark, quickly cross the meadow to the west.

Their quickness and elegance give the impression of riding silent electric scooters. The occasional clap of the ladders is the only sound breaking the silence.

Half an hour later, an alarming noise can be heard on the western part of the border fence. Refugees are shouting, creating the impression they are conquering an enemy fortress rather than subtly and silently crossing the border.

A female voice from a siren attached to the border fence warns them in Hungarian to move away.

“This is their tactics. They draw attention to one side so some of the others can cross elsewhere,” Milan explains – a strategy confirmed to BIRN by several refugees as well.

In the middle of the meadow is a building of a Youth Academy of ruling Serbian Progressive Party. Most of the time it is closed and no one is there. A few hundred meters behind stands a long border fence, on which where there are no cameras for at least 500 meters, Milan says.

“I checked it myself. My take is that the ones with good connections pass the border there,” he says.

Around midnight, a cacophony of noise again rips through the night silence. After a while, BIRN, along with Milan, drive away, waving to some refugees sheltering around a fire on the edges of the forest we met on the way.

Our night is over, but for some of these people, it has just begun. For many, this kind of night will last for months, even years.

They will not stop until they see the “dawn” of a new life – far from their homelands, shattered by war and poverty.

Post Views: 85
Previous Balkan States’ Stash of Soviet-made Weapons Could Aid Ukraine
Next Khamenei’s Attempts To Have His Son Named As Successor