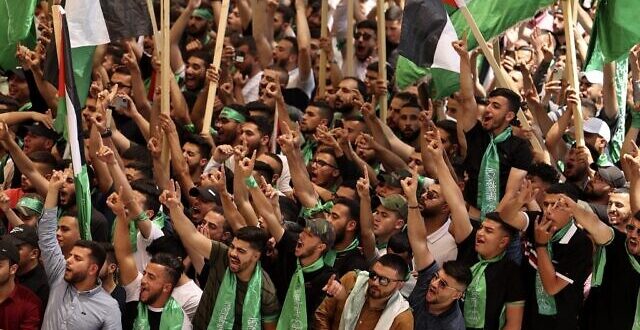 Hamas activists won a landslide victory in student elections at the flagship Birzeit University north of Ramallah on Wednesday night, in a possible indicator of how West Bank Palestinian public opinion is shifting.

The Hamas-linked Islamic Allegiance Bloc took 28 seats out of 51 on the student council. The Fatah-linked Yasser Arafat Bloc won just 18, reflecting the dwindling popularity of the party which dominates the Palestinian Authority.

While the prestigious, elite Birzeit was once a Fatah stronghold, the two rival Palestinian movements have mostly tied in recent years. In the last elections — held in 2019 — both parties garnered 23 seats.

Palestinians have not seen national elections since 2006, when Hamas won a decisive victory over a divided Fatah in a parliamentary vote. University elections provide young Palestinians with a rare opportunity to head to the ballot box; the vote is closely followed by the Palestinian public.

Palestinian Authority President Mahmoud Abbas, who also leads the Fatah party, pledged to hold Palestinian national elections last January. But he canceled them weeks before they were set to be held in May, apparently fearing a humiliating loss to his rivals within Fatah and in Hamas.

“Soon the day will come in which our people as a whole will have their say,” said Hamas West Bank commander Saleh al-Arouri in a brief video from abroad following the victory.

Abbas’s term in office expired in 2009 and he has since ruled by emergency order. Many Palestinians see his administration as corrupt and ineffectual. Opinion polls regularly find large majorities call for his immediate resignation.

Student activists affiliated with Hamas, Fatah and other factions made their case to thousands of their Birzeit classmates on Tuesday in a fiery debate streamed live on Palestinian social media.

The moderators asked questions about student life. But the parties’ representatives on the debating stage mostly talked politics.

“While Fatah’s leadership was weeping at the United Nations [during the last Gaza war], the resistance’s brigades were firing rockets at the occupied lands,” Muatasem Zloum, a representative of the Hamas-affiliated Islamic Allegiance Bloc, called to the Fatah students.

Israeli forces arrested Zloum along with several other members of the Islamic Allegiance Bloc on Tuesday night following the student debate. The Shin Bet security service said they had been arrested for their Hamas activity.

At the Tuesday debate, the distance between Abbas and the young Fatah student activists could not seem farther.

The PA leader condemned the killing of Israeli civilians in several recent terror attacks, including one in the central city of Elad in which two Palestinians killed three Israelis. But on the Birzeit debating stage, faced with Hamas and Popular Front challengers, Fatah-linked students praised the attacks.

“Subhi Sbeihat, who executed the Elad operation, is a member of Fatah’s youth — he is Fatah!” said Mahmoud Daoud, to resounding cheers from pro-Fatah students.

“Israel is beneath our boots,” Daoud added.

Zloum, the Hamas activist, repeatedly slammed Abbas’s government for its alleged repression. He invoked the name of Nizar Banat, a Palestinian activist who died in the custody of Ramallah’s security forces last July.

Banat’s death sparked rare protests calling for the fall of Abbas in downtown Ramallah and Hebron. The rallies were brutally dispersed by baton-wielding PA riot police, who beat protesters and smashed their cameras in an attempt to destroy the evidence.