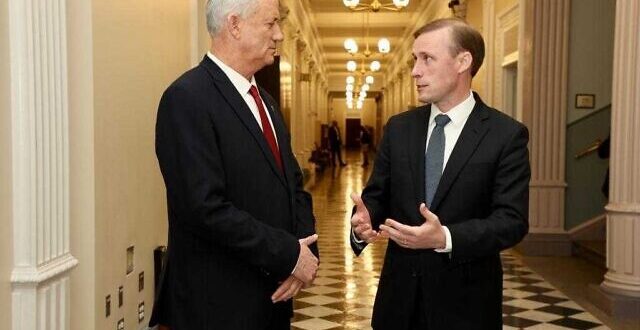 Defense Minister Benny Gantz met with US National Security Adviser Jake Sullivan in the White House and thanked him for the Biden administration’s commitment to Israel’s security.

Landing in Washington on Wednesday, Gantz made his trip amid tension between Israel and the US, following the killing of American-Palestinian reporter Shireen Abu Akleh in the West Bank and Israel’s new policy for foreigners seeking to enter the West Bank, set to come into effect in July.

According to a readout issued by the Defense Ministry, the meeting between Gantz and Sullivan focused mainly on Iran’s progression in its nuclear program as negotiations stalled in Vienna, alongside Tehran’s “destabilizing regional activities.”

The meeting was attended by Israel’s Ambassador to the US Michael Herzog; the director of the Defense Ministry Political-Military Bureau, Dror Shalom; and the defense minister’s military secretary, Yaki Dolf.

On Tuesday, Gantz warned that “the price for tackling the Iranian challenge on a global or regional level is higher than it was a year ago and lower than it will be in a year,” noting that Iran was just a “few weeks” away from accumulating sufficient fissile material for a bomb.

Iran also announced earlier this week the inauguration of a production line for manufacturing a new military drone, the Ababil-2, in Tajikistan, in a move seen as an effort to balance the power between Sunni and Shiite players in the region.

Meeting with Sullivan, the defense minister “emphasized the need to work closely and prepare for any future scenario,” the readout said, noting “Israel’s excellent defense cooperation with the US.”

Discussing the most deadly terror wave seen in Israel in years, which has claimed the lives of 20 people since mid-March, Gantz and Sullivan discussed ongoing operational activities in the face of incitement and terror, it said.

Gantz has recently vowed to use “every means possible” to root out the deeper causes of terrorism in Israel, including incitement.

“We will cut off the hand holding the knife, put our hands on those who spread incitement and blood libels in the name of religion,” Gantz said earlier in May.

He reiterated that commitment to Sullivan, emphasizing that Israel would take the measures necessary to defend its citizens and sovereignty while guaranteeing that Israel’s defense establishment would continue its policy of promoting “confidence-building measures” for Palestinians who are not involved in terrorist activity.

On Wednesday, Channel 12 cited American officials who threatened to suspend the process of adding the Jewish state to the US Visa Waiver Program if Israel fails to reevaluate its recently published new restrictions imposed on foreigners, including US citizens, seeking to enter the West Bank to study, teach, volunteer or work in Palestinian cities.

On other fronts, however, Israel’s close cooperation with the US on security issues is more evident.

According to a Tuesday report by Channel 13, the US Air Force will participate in a large-scale Israeli drill later this month simulating a strike on Iran’s nuclear facilities as part of the broader Chariots of Fire exercise.

Unprecedented Israel-US aerial collaboration in a drill simulating a strike on Iran’s nuclear facilities is seen as a potential message to Iran amid the long-stalled negotiations in Vienna over a return to the 2015 nuclear deal, which Israel opposes, warning it would lead to “a more violent, more volatile Middle East.”