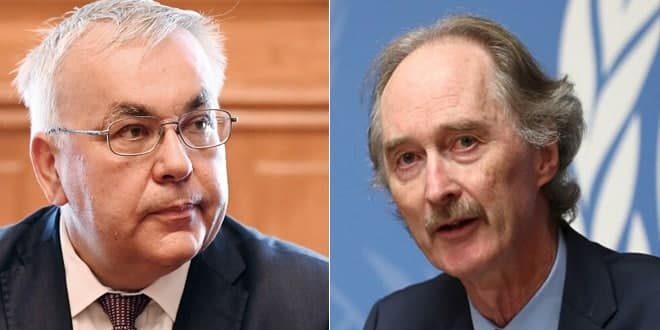 Geir Pedersen arrives in Damascus on Saturday for a two-day visit during which he will meet with Foreign Minister Faisal al-Mekdad, according to al-Watan.

UN Special Envoy to Syria, Geir Pedersen, arrives in Damascus on Saturday for a two-day visit during which he will meet with Foreign Minister Faisal al-Mekdad.

Al-Watan learned from informed sources that, in Damascus, Pedersen will discuss arrangements for holding the committee’s eighth round of meetings to discuss amending the Constitution in Geneva. There, he is scheduled to meet – in addition to Mekdad – both committee joint chairman Ahmed al-Kuzbari, the Russian ambassador in Damascus, and the Russian president’s special representative for developing relations with Syria, Alexander Yefimov. On Sunday, Pedersen will meet committee members to discuss changes to the constitutional mini-committee with the civil society delegation.

Al-Watan revealed earlier that the meetings of the Constitution Discussion Committee are scheduled to begin in its eighth edition on May 30th. The national delegation will arrive with several members of the civil society delegation in Geneva on the 28th of May, coming on a private plane departing from Damascus.

In earlier statements, the UN envoy had described the amnesty issued by President Bashar al-Assad as an important and positive development. Pedersen said on the sidelines of his participation in Supporting Syria’s Future Conference: “I announce a presidential amnesty decree and many saw it as a very important and positive development, the Syrian Ministry of Justice said that hundreds benefited from the amnesty decision, to be followed by other amnesty resolutions.”

“When I visit Damascus, I hope to get more information on the results of the presidential amnesty decree,” he said, expressing the hope that “the next round of constitutional committee meetings at the end of May will make even little progress.”

The Russian Foreign Ministry said in a statement that during the phone call, which took place at the initiative of the UN Envoy, views were exchanged on these situations, and special attention was given to the urgent tasks of providing comprehensive humanitarian assistance to the Syrian Arab Republic.

The statement added that the emphasis was put on the need to work to advance the political process led and implemented by the Syrians themselves to solve the crisis in their country with the help of the UN and in light of the regular discussions at the UN Security Council.