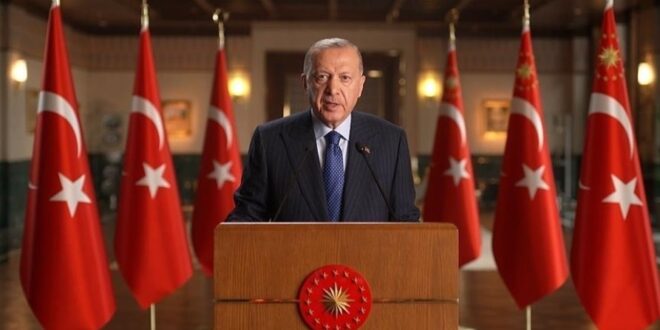 Turkish President Recep Tayyip Erdogan confirmed his regime’s insistence on implementing a plan to transfer Syrian refugees to northern Syria, according to al-Watan.

On Wednesday, Turkish President Recep Tayyip Erdogan confirmed his regime’s insistence on implementing a plan to change demographics in northern Syria. Erdogan announced that his regime has completed a large part of the so-called “safe zone,” which it is working towards establishing in the occupied areas of northern Syria. The plan involves building several housing units to settle one million Syrian refugees there, after Turkey has abandoned the local population and stolen their property.

According to Sputnik, Erdogan said during a speech in parliament that his regime “has completed a large part” of what he called the “safe zone.” In addition, he stated that Turkey is working to secure the rest of the areas.

In May, Erdogan announced a project to settle one million Syrian refugees in 13 Syrian areas where the local population has been abandoned. Last Monday, local sources revealed that the Turkish regime intelligence recently instructed its mercenary — which controls the occupied area of Afrin in the northwestern Aleppo countryside — to seize the property of expatriate people from Afrin, who are outside Syria. This applies especially to residents of European countries, with preparations having been made for the seizure and transfer of ownership from the original owners.

On Wednesday, the Turkish occupation forces began their measures to build new housing units in the countryside of the occupied Afrin region, after forcing landowners to surrender those lands under the force of weapons. This plan forms part of Erdogan’s policy of bringing about demographic change in Turkish-occupied areas in northern Syria.

Quoting sources from rural Afrin, the Athr Press website stated that patrols by the Turkish occupation forces and their loyalist gunmen have raided several farms near the village of Kafr Safra in rural Jindires— specifically, within a site known by local residents as “Quorta Bod.” Farmers had evacuated these lands, and landowners were forced at gunpoint to sign contracts renouncing all rights to their property.

On Sunday, hundreds of citizens demonstrated in the Turkish-occupied city of Ras al-Ain in rural Hassakeh in front of the UN office in Qamishli. The demonstrators protested against the Turkish regime’s project to build the housing units. Hundreds of citizens also marched in the city of Afrin, which is controlled by Turkish forces and their mercenaries, in rejection of the “safe zone” project.

Post Views: 157
Previous Pro-Assad Figures Ousted from Parliament in Lebanon
Next Pedersen in Damascus on Saturday to Discuss Eighth Round of Constitutional Committee